The Secret Behind India’s Improved Fielding 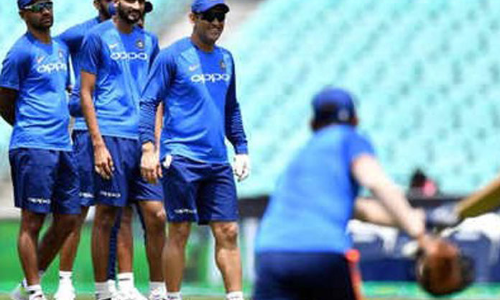 On Wednesday, fielding coach R Sridhar said, A blindfold technique to improve reaction time, leather balls of different weights to gauge trajectory in breezy conditions and a simulation machine for slipcatching have made the Indian team a remarkably improved catching unit

Hamilton: On Wednesday, fielding coach R Sridhar said, “A 'blindfold technique' to improve reaction time, leather balls of different weights to gauge trajectory in breezy conditions and a simulation machine for slip-catching have made the Indian team a remarkably improved catching unit.”

In England, the 'blindfold technique' was specifically used for red-ball cricket, while a simulation machine called 'Teammate' was used in Australia for slip-catching.

When enquired about the 'blindfold technique' particularly, Sridhar explained: "We have a feeder behind a curtain and the catcher doesn't know from where the ball is coming from. We would slide it from under the curtain...It did improve their reaction time (reflex); we did that extensively in England throughout the Test series. It was specifically for red-ball cricket."

Now, balls of different weights are being used during the ODIs against New Zealand in order to help the players prepare for skiers with steady breeze threatening to change the trajectory.

Giving a peek into his trade secret the fielding coach told, "We brought a different type of machine called 'Teammate' for slip-catching simulations. We did a lot of blindfold work or reaction work. By the time, we reached Australia, it was a well-oiled machine and if you see, Virat took some brilliant catches."

When asked about how the team is defying the breeze while handling skiers, Sridhar said, "The biggest challenge you face in New Zealand as a fielder is the breeze. Most of the batting and bowling plans are based around that breeze. If we see the ball wobble a lot in the air, we try and simulate that during practice, use balls of various weights, so that the ball swerves and swings more in the air."

Sridhar also informed that the Indian team's support staff is in touch with various IPL teams to ensure that players adhere to the "follow-up programme". We keep the communication going with players and also try and keep in touch with fielding coaches of the respective IPL teams so that we can get information about how they are going about."

"We do give them follow-up programme for fielding just like trainer (Shankar) Basu does for fitness and physio Patrick (Farhart) does for rehab.

Sridhar also admired comeback-man Hardik Pandya's stunning catch off Yuzvendra Chahal's bowling to dismiss rival captain Kane Williamson. He said, "The desperation he brought was splendid to see. He is always a good fielder and dying to get into the thick of things and be a part of this and get back to what he loves doing, that is to play cricket and as best as he can."

"He (Pandya) made a very difficult catch look easy. It was a piece of magic and he is known for that and he is one of our best fielders. Hardik brings a lot to the team. Not only have a good balance but other factors as well," he concluded.