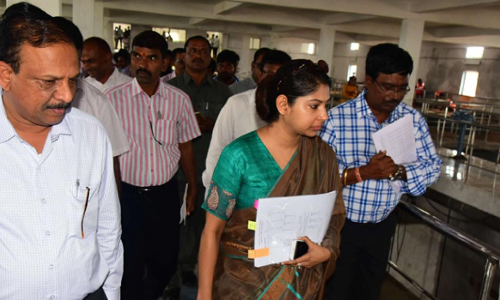 She inspected the water treatment plant in LMD Colony of Thimmapur mandal, along with Engineer-in-Chief, CE, SE and AEs. Later Smita held a review meeting with the engineering officials and contractors.

She directed the officials to ensure quality in MB works by deploying efficient personnel to complete the tasks. ‘If required increase the labour and deploy MGNREGS workers for the purpose,’ she suggested the RDO and Tahsildars.

the engineering officials and agencies involved in the construction were directed to take MB works seriously and to complete the works by Deepavali festival so as to supply water to houses.

Smita wanted the officials to chlorinate the filter beds by deploying efficient personnel. ‘You should deploy additional teams to fill the pipeline gaps’. Referring to the gaps in Sundargiri 143, she called for use of additional equipment and more teams for expeditious completion of the work. ‘Prepare clear plans to complete gaps in 20 pipelines every day,’ she advised officials.

Smita assured to release funds promptly, as there was no shortage of money, while laying stress that work should not be stopped because of rain or other reasons.

She directed that OHR works in the district should be speeded up, while taking up repairs of old OHRs by laying pipelines. For this purpose, funds provided by the 14th Finance Commission should be utilised, she said. Among those present were MB Engineer-in-Chief Krupakar Reddy, CE Srinivas Rao, SE Ch Amarendra, EE Chalma Reddy, RDO Raja Goud.