Poverty line and its associated concepts and issues 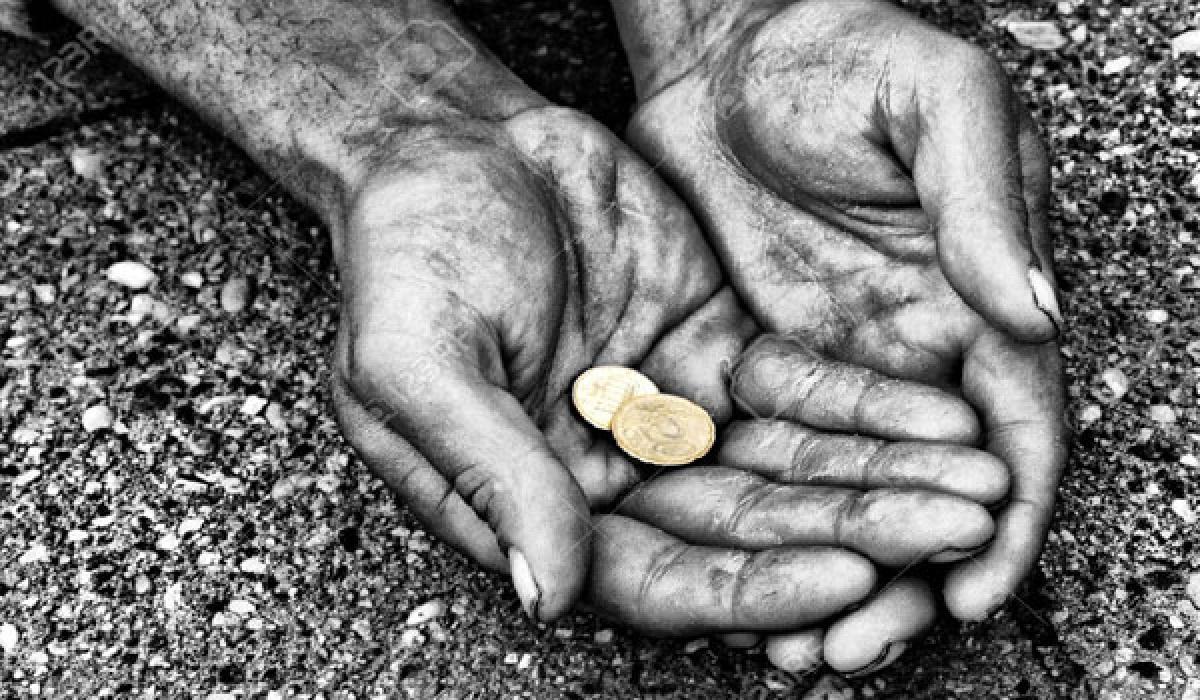 From the times immemorial society has been divided as rich and poor or powerful and weak.Some have dominant access to resources while some are deprived of resources. Situation is no different now.In democracy, government attempts to narrow this gap by taking up task of redistribution of resources.

• From the times immemorial society has been divided as rich and poor or powerful and weak.

• Some have dominant access to resources while some are deprived of resources. Situation is no different now.

• In democracy, government attempts to narrow this gap by taking up task of redistribution of resources.

• But resources at disposal of any society are limited and challenges are many.

• For effective redistribution and bringing lasting change, it is essential that deserving beneficiaries of government’s help are identified.

• To identify poor we need some benchmarks and person falling below this benchmark will be regarded as poor.

• In India, initially most of the government support (mainly public distribution system) was universal, but in latter periods (from 1990’s) they adopted targeted support which was meant only for deserving poor.

• This was due to fiscal constraints and a move from socialism to market based economy as result of LPG reforms.

• Major landmark in this was adoption of ‘Targeted Public distribution System’ in 1990’s in which subsidized food was only meant for Below Poverty Line people and determination of Poverty line became a big issue since then.

• It should be noted that ‘determination of poverty line’ and ‘identifications of poor/beneficiary’ are almost different things.

• Poverty line is (was) determined by Planning Commission on the basis of data provided by ‘National Sample Statistical Organization’ (NSSO).

• NSSO conducts a survey at 5 year interval of a mere sample to capture consumption patterns of various sections of society.

• It is taken care that sample size represents character of the Nation or a state as a whole.

• This gives us data about various classes of consumption in the sample size.

• For e.g. say how many people out of sample size consume what food? how many calories/nutrients they get, what is there expenditure on food and nonfood items? What people eat most within food – cereals, pulses, fruits? What are the patterns? And so on. This is goldmine of information that planning commission seeks.

• This ideal basket includes food and non-food items which are recommended by expert groups, among other things, which are constituted from time to time (NSSO job is only to collect data and patterns).

• Then this poverty line is adopted by Planning Commission. For determination of this figure, reliance is obviously placed on data provided by NSSO.

• Now poverty line figure based on a minor sample and we need to determine number of poor in the country i.e. people whose consumption expenditure is below this poverty line.

• For this ratio of ‘poor to the total sample size’ is replicated on total population of the country.

• To ‘determine poverty line’ and estimation of ‘number of poor’ there is no identification of particular households.

• Number of poor below poverty line’ in this sense is just a tool to measure effectiveness of government policies and make interstate, International or temporal comparisons.

• Other product of this exercise is ‘poverty line’ and it might be (or not) be used for actual identification of poor/beneficiaries.

• Ministry of Rural Development is conducting BPL census for ‘Rural poor’ since 1992 on the basis on which rural poor are actually identified.

• In case of urban poor there no uniform mechanism in place and State governments/ UT admin.

• Adopts their own methodology for identification. Having said this, relevance of identification on basis of poverty line is doubtful these days.

• It is widely accepted that poverty is multidimensional and different schemes of government should either be universal, or their beneficiaries should differ as per matter of scheme.

• For example MGNREGA is universal (now focus is on 250 backward districts). Food Security Act covers two-third population which is far more than BPL population. Indira Awas Yojna is for homeless (not for BPL), Sarva Shiksha Abhiyan or RTE are universal.

• However, many benefits from the government are still exclusively for BPL card holder such as free gas connection or kerosene oil.

• Notwithstanding all this, poverty line and estimate of population will still be needed to measure and compare effect of policies of various national and state governments.

• Presumptions on which this line can be made are many and it is herculean task in continent type country like India. There is always fear of exclusion of deserving ones and inclusion of undeserving ones.

• Poverty is a state of deprivation of people or society, in which they are not able to meet their basic needs such as food, clothing and shelter.
• In all this they have low capacity to deal with Socio-economic and environmental exigencies. This definition however can be contested for it doesn’t include education, healthcare and decent standard of living or dignified life.

• But it could be agreed upon that former are immediate needs and will be preferred by any deprived person.

• For e.g., India in initial decades after independence was severely short of food grains and that prompted government to invest in agriculture which resulted in green revolution.

• At that time investment in social infrastructure was negligible and now that India has achieved self-sufficiency, focus has shifted to Health and education.

• There are many challenges in marking a poverty line, such as determining components of poverty line basket. There are price differentials (of constituents of basket) which vary from state to state and period to period.

• Further, consumption patterns, nutritional needs and prices of components keep on changing as per dynamics of macro economy and demography.

• Under absolute poverty certain minimum basic standards of living are defined and people living below these standards are termed in policy as poor or below poverty line.

• This is done by determining a poverty line basket and calculating monetary figure of that basket (as in India), which varies across countries.

• In contrast relative poverty is measured in relation to rich people of the country.
•In this method certain percentage of economically bottom population is always considered below poverty line.

• In these countries BPL people may have all basic amenities and reasonable standard of living, but as their incomes are far below national per capita income they get support of government.

• Argument that India should focus on absolute poverty need no further elaboration, given such low consumption of vast part of population which NSSO and various other studies reveal.

• Determining composition of the basket is among most debated part of the issue.

• But whether they should be included or not, if so their weights in basket, whether health should get preference over housing, or whether reasonable expenditure on recreation is included in basket etc. are toughest questions to be answered.

• Problem is that these are qualitative aspects, which are needed to be quantified.

• Further, consumption varies as per age groups, occupation, regions, cultures and gender. This variation is hard to capture.

• Over the last decade consumption by Indians has risen constantly and share of food in total consumption has fallen.

• Historically focus of India’s poverty like basket policy has been on consumption of calories which was first adopted in 1970’s on recommendation Algah committee.

• It was believed that 2400 kcal in rural areas and 2100 Kcal in urban areas was sufficient to give good nutritious health to citizens.

• In this sense, number or percentage of people below poverty line and those of under or malnutritioned people, should be roughly same.

• But it is known that undernutrition is more rampant and widespread than poverty and outscores ratio of BPL people by huge margin.

• This forced our policy makers to look for other determinants of nutritional status and they found that pre natal/birth health of mother, post natal care of babies, Sanitation, open defecation, health and educational infrastructure has decisive impact on nutritional status of people.

• Lack (or presence) of many these things has pushed significant number of people towards undernutrition, even when they consumed more than needed calories. These issues were taken into account by Tendulkar committee to some extent. (More on this later)

• During the survey NSSO workers will ask certain questions to households. Period covered by these questions is called reference period.

• Care has to be taken that this period is representative of general pattern of consumption. If we take ‘Poverty line Basket’ it will cover food and nonfood items.

• In case of food, expenditure is routine and a month’s consumption can give us data which represents general pattern. If we take consumption pattern of Nonfood item such as clothes or footwear, we find that in a normal household, these are once or twice in year expenditure.

• An alternative way of calculation of poverty line can be one based on Income of the population.

1. Huge majority of population has irregular income, most of them are in informal sector which consists of self-employed people, daily wage laborers etc. Income of this group is highly variable both temporally and spatially, while consumption pattern are comparatively much stable.

2. Even in case of regular wage earners, there are additional side incomes in many cases, which is difficult to take into account.

3. For e.g. MGNREGA provides employment for about 100 days, for rest of the time too people will earn something.

4. NSSO’s sample based surveys use a ‘reference period’ (say 30 days). They will ask households under survey about their consumption in last 30 days. This they will take a representative of general consumption of that household. This is not possible in case of income.

• So we can conclude that in absence of reliable data Income based approach can’t be relied upon.

• Now we’ll see evolution of poverty line in India in Its current form.

• After this new Expert group is appointed. This group has to convert results of past years by the previous methodologies into those by new methodologies, sometimes using old base year, as per data available with NSSO.

• This is essential so as to make poverty line and population BPL comparable. This is a bit confusing as there is no consistency and new data keep coming. We just need to have basic idea of evolution and most of the figures or data can be ignored. It is given just for an idea of patterns.

• One of the earliest estimations of poverty was done by Dadabhai Naoroji in his book, ‘Poverty and the Un-British Rule in India’.

• The poverty line proposed by him was based on the cost of a ‘subsistence diet’ consisting of ‘rice or flour, dhal, mutton, vegetables, ghee, vegetable oil and salt’.

• Next, in 1938, the National Planning Committee (NPC) estimated a poverty line ranging.