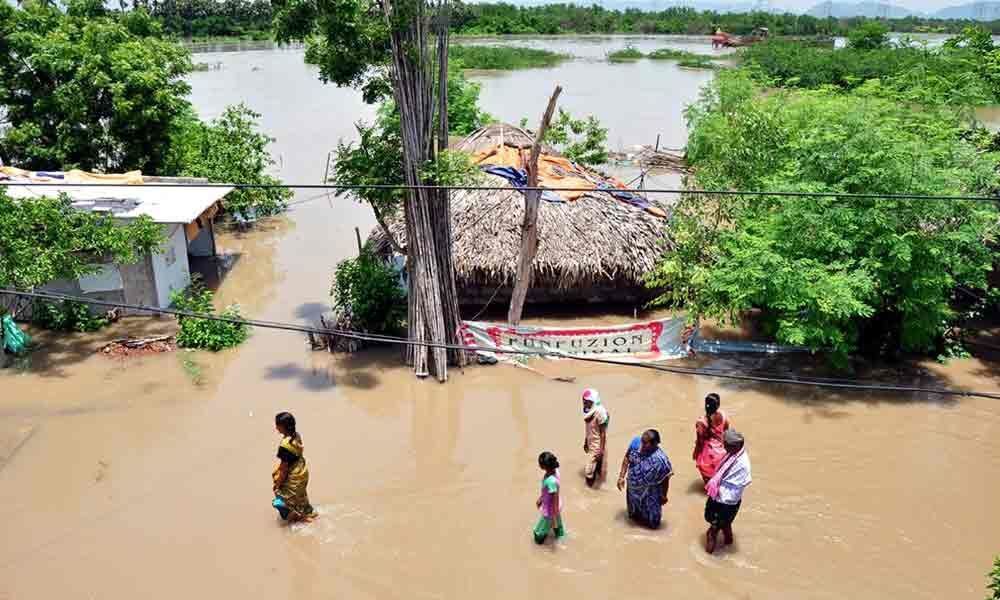 x
People wade through floodwater in Tallayapalem village near Undavalli in Guntur district on Friday.
Highlights

Vijayawada: The entire Krishna river course area downstream Pulichintala project is facing flood threat following the huge inflows from upstream areas. According to officials, all the reservoirs on the river are still receiving copious inflows from upstream areas. Nearly 7.5 lakh cusecs of water is being discharged from Pulichintala project to Prakasam barrage and the same is being released into the sea.

A breach developed to Krishna flood bank at Kolluru in Guntur district as the officials failed to take precautionary measures by identifying the weak points on the flood banks. Several villages in Krishna district, especially the low lying areas in Jaggaiahpet, Nandigama, Ibrahimpatnam mandals are facing submergence threat.

The river view guesthouses of VIPs including former Chief Minister N Chandrababu Naidu's residence at Undavalli are facing flood threat. Already, hundreds of houses which are located inside the Krishna flood bank at Krishnalanka in Vijayawada city were inundated by floodwater.

Similarly, floodwater entered several island villages in Kolluru and Bhattiprolu mandals in Guntur district. The Krishna river bund got breach near at Pesarlanka village. Though the bund has weak points which breached in the past too, but the officials neglected to take precautions by strengthening it.

Similarly, 301 tmcft water is available in Nagarjunasagar reservoir as against its full storage capacity of 312 tmcft. It is getting 7.5 lakh cusecs of inflows and the same is being discharged to Pulichintala project.

As much as 7 lakh cusecs of water is being discharged from Jurala project and it has been getting the same quantity of inflows. Around 7 tmcft water is available in the project as against its total capacity of 9 tmcft. Both inflows and outflows are 5.5 lakh cusecs in Narayanapur reservoir, which has now 25.35 tmcft water as against its full storage capacity of 37 tmcft.

The first reservoir on Krishna river Almatti is still receiving 5 lakh cusecs of inflows and the 105 tmcft water is stored in the reservoir as against its full storage capacity of 129 tmcft.

The government machinery should take precautionary measures based on the flood levels.

Especially Krishna river bunds are in a weak condition in two locations one at Amaravati capital location and near Kolluru mandal. The official machinery did not visit the locations.

The places got breaches in the past as per the records of the water resources department. Moreover, the ministers have not visited the flood-prone areas, instead indulging politics on whether Naidu's residence has submerged or not. One senior official of the water resources department refused to discuss flood management operations which ought to be the main issue in the current situation.