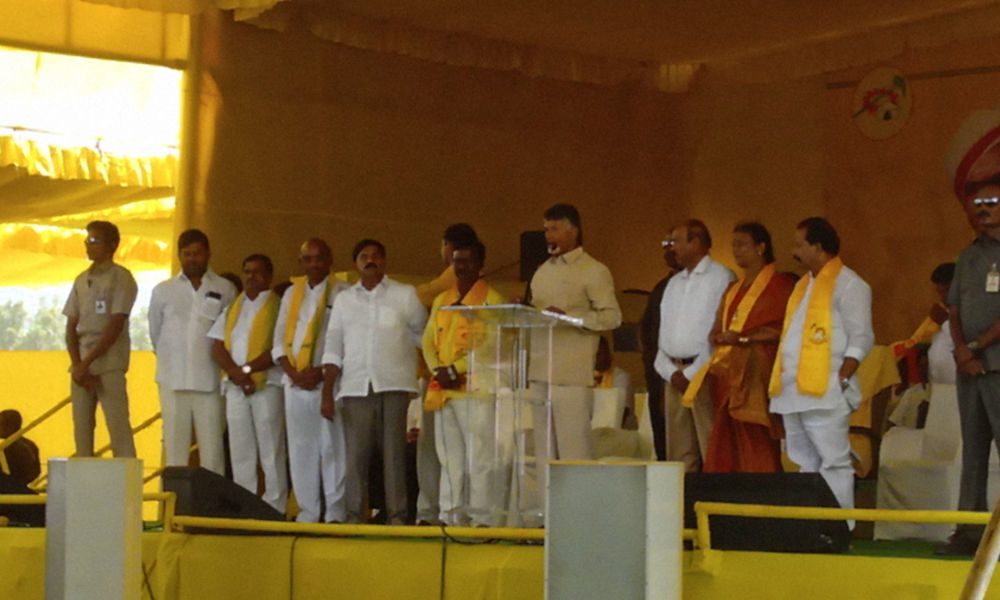 While asserting his government's commitment over interlinking of all rivers in the state, TDP National president N. Chandra Babu Naidu has said that people of Kadapa are going to conduct farming operations with Godavari waters as government is going ahead for interlinking Penna river with Godavari very soon.

Kadapa: While asserting his government's commitment over interlinking of all rivers in the state, TDP National president N. Chandra Babu Naidu has said that people of Kadapa are going to conduct farming operations with Godavari waters as a government is going ahead for interlinking Penna river with the Godavari very soon.

As part of electioneering, he addressed a huge gathering at Badvel on Sunday.

Chandra Babu Naidu recalled that his government is responsible for providing waters to Kadapa district for agriculture operations earlier than Kuppam by bringing Krishna waters through Gandikota Reservoir.

He assured the people of Badvel will have the adequate quantity of Penna backwaters as works are under progress.

While condemning the comments of opposition leader over TDP is hatching a conspiracy to create law& order problem during the elections, he said the government is very clear on its part for performing elections free and fair manner. "TDP has necessary to resort such unwanted things as he never encouraged murder politics during his 40 years of his political tenure.

Saying that Jagan Mohan Reddy is the big problem for the state Chief Minister has urged the people not to commit a mistake by franchising their vote in favour of YSR Congress as the state would have witnessed anarchy if they do so.

Chief Minister has warned of initiating stringent action against those who responsible for creating law &Order problem during the elections.

While alleging that Jagan Mohan Reddy family members are responsible for killing YS Vivekananda Reddy as they tried to tampered the evidence, and created a fabricated letter with the writing of deceased to escape from the case.

"Government has secured all the evidence related to the murder case of Vivekananda Reddy culprits would be arrested very soon".

Defending TDP step having an electoral alliance with BHP in 2014 elections, Chandra Babu Naidu said he has taken such decision in the interest of securing Special Category Status to AP. He said BJP lead N DA government betroyed the state instead of extending support. The chief minister has assured that he would provide MLC post to party Badvel party in charge P. Vijayamma.

Meanwhile addressing the public meeting at Rayachoti he said that government has initiated all steps for the development of Rayachoti Constituency.

He said the government would make ensure of providing water for every acre by completing Handri Neeva Sujala Sravanthi.

He asked people to stand still the Rayachoti MLA G. Srikantha Reddy why he failed to raise questions over HNSS.