A man with a mission 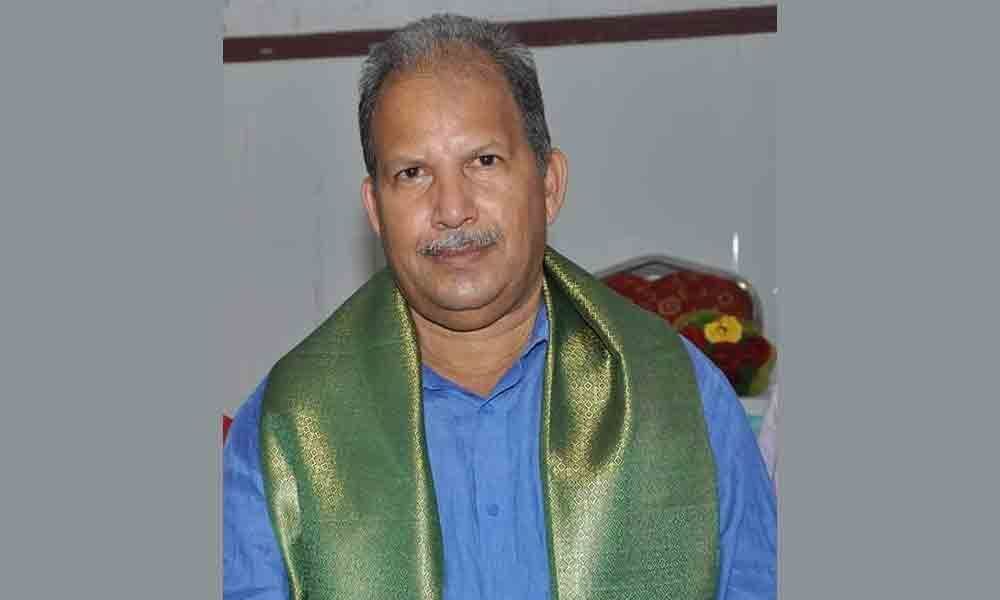 Poet, translator, author, orator Rama Teertha worked tirelessly to rejuvenate, restore and uphold Telugu literature in all its genres. He was constantly endeavouring to organise high quality literary programmes celebrating Telugu literary stalwarts and their works until his untimely death on May 31

This is the story of a man that begins from when he was a 17-year-old boy, who went on to become a great poet and crusader of Telugu literature. Four decades ago, on Khurda Road (Odisha), emerged a small literary forum named "Kavitha" established by the now renowned poet Vijaychandra, and his team of aspiring teenagers. Intermediate student Rambabu, who only 17 then, came to Khurdaroad from his native place Nellore to be with his, who worked in Railway hospital as a pharmacist. His father was Y Radhakrishna, and Surykantham, his mother. He is the eldest son of the family and had three sisters and two younger brothers (the second brother is DGM, SBI, and his last one is now a bank manager in Vizianagaram). Being elder son, he begot love from all his family and relatives.

His father used to receive spiritual journal from the mission of Swami Ramatirdha from Punjab. Looking for a good pen name Rambabu has taken the name of the journal 'Ramateertha' as his pen name. What would you expect a teenage poet to write, a love story, love poem or a revolutionary poem? But Ramateertha penned a story in which a lady having the dead body of her child in her arms begs for more than one packet of food from the cyclone relief team. In the story, which he titled "tintoone undi", the hungry mother keeps her son's dead body beside her while she eats up the food. The story marked the beginning of this phenomenon 'Ramateertha', a boy, who recognised the pathos of life.

His literary pursuit continued in Vizag, where he landed a job in the Dock Safety department. He had a son and daughter, with his spouse Kameswari. By then, he was an active member in Sahridaya Sahithi, then run by Chitrakavi Atreya. In 1994, Arudra released his first poetry anthology "Thella mIriyam" (white pepper). Ram also worked as a secretary of one of the oldest literary forums, Visakha Sahithi (still running) and along with his learned friend NS Murthy, he established another forum, "Mythri". Together as translators both of them brought out a small translation journal "MOSAIC", which they could only release two issues before it stopped.

In 2003, December, along with his friend, writer, translator, Sahitya Akademi winner LR Swami and his childhood friend, who came back into his life, writer, translator and critic Jagaddhatri (the author of this article), registered a literary forum "Mosaic Literary Association" and since then there was no looking back. His translation of the world's first modern poem TS Eliot's "The Waste Land" (1922) into Telugu named "Vrudhaathri" was the restart of his career. He was the general secretary and the charioteer of various literary programs. The period from 2004 to June 2019, became a decade and a half of literature for not only Telugu but world literature as well raised to heights of appreciation by the programs conducted by Mosaic.

There were weekly programs under the name "Monday Mosaic" conducted for three years.

During the 15th anniversary of Mosaic Literary Association, in 2018, Mosaic Literary Award was established and Sahitya Akademi winner Saleem was the first one to receive the award. The second award was given to Dr UA Narasimhamurthy (posthumously) received by his best half Ramanamma garu in April 2019.

The personal contributions of Ramateertha to literature is a bounty uncountable. Mosaic and Ramateertha were no separate entities – What started in 2006 as Sri Sri Centenary countdown by Mosaic went on till 2010, a literary entity celebrated with great pomp. Mosaic was the first to celebrate 100 years of Jana Gana Mana in the country. The organisation released two music albums, Sataabdi SriSri (the poet's poems as a tribute to SriSri), and Janageethajali. Poetry, columns, essays, articles, plays, songs, translations, name any genre in literature; Ramateertha made his mark. More than everything else, he was a very mesmerising orator, and a planned organiser. His instantaneous efforts in response to many literary occasions made him a literary icon in and around the two states. His visits to other states like West Bengal, Chennai and Bangalore etc enhanced his literary fervour and made him more universal. Listing out his contribution to literature would be a very difficult task and a space constraint here. To count the works, he has done would be like counting the waves of the sea. In a decade and a half, he along with his team had done, what an institution could do in fifty years. He was always instant in picking up all the situations in literature and society too. His "Reading Room" column, which ran every Monday in the evening daily, Leader, showed his societal responsibility. His observations on world cinema in the daily Janatha won him great applause. Every morning he used to serve an article either in English or Telugu regarding some interesting aspect along with a cup of hot coffee. He always said, "My table should be left with full of work when I leave this world and somebody else should continue it!" All those who worked with him consider it a divine bliss to have shared life and literature with him. We all from Mosaic promise to continue his spirit of work and carry forward the mantle of literature he handed over to us. That alone will be a great loving tribute to this great soul.

- The author of the tribute piece Jagaddhatri was a girl of thirteen when she first met Ramateertha and began to admire him after she read his story. He used to play cricket with her brother Jagannath (EXTUIT, USA). Life had thrown them apart and it was only after 25 years that they met again and together continued the literary activities. Ramateertha was a contributor to The Hans India, and his articles on literature and stalwarts of Telugu literature added great value to Sunday Hans.