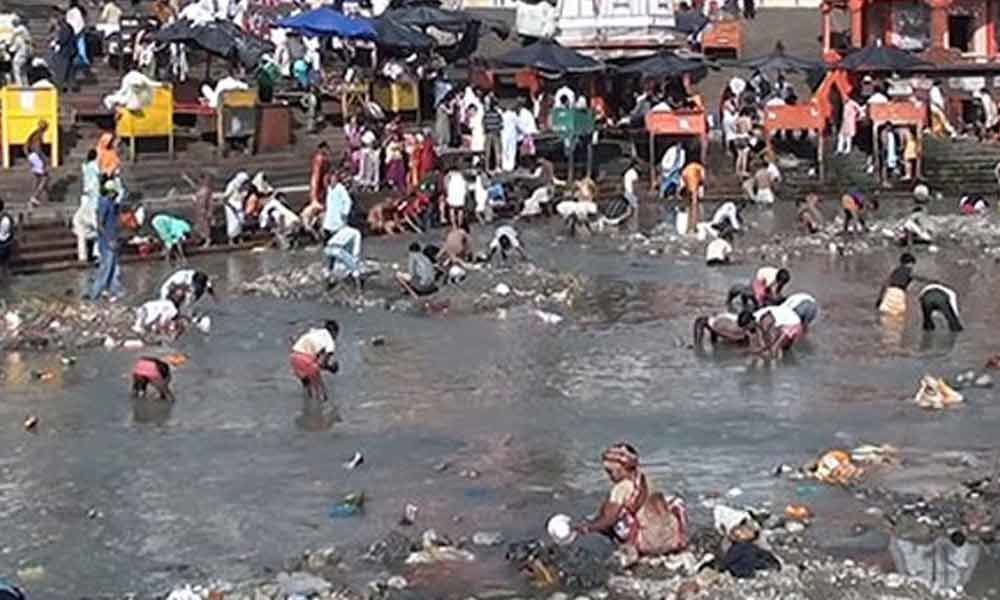 Yet, Uttar Pradesh's rivers find no mention in election discourse despite clean-up projects being the keystone of the Centre

The poll season has arrived and netas have started their campaigns. While the Opposition is making noise that Prime Minister Narendra Modi has not been able to keep his promises, the Bharatiya Janata Party (BJP) is banking totally on its macho leader who can fire bullets at Pakistan and not offer "biryani to terrorists".

Much water has flown down the mighty Ganga in the last five years, but despite Clean Ganga Project and Namami Gange, the river is still laden with pollutants. The condition of other rivers in Uttar Pradesh is no better and they don't even find mention in any political discourse.

Although these are early days, there is no talk of the Ganga pollution by any of the politicians. Priyanka Gandhi Vadra, in-charge of Indian National Congress in Eastern UP, did take a boat ride on the holy river from Prayagraj to Varanasi from March 18 to campaign for the party and its chief, her brother Rahul.

She spoke on unemployment among other issues and visited temples but had nothing to say about the quality of water in the river.

Vishwambhar Nath Mishra of Indian Institute of Technology-Banaras Hindu University (IIT-BHU), Varanasi and the mahant of Sankat Mochan temple, says, "The moment they do (talk about the Ganga), they will be trapped.

Their lies will be exposed." In 2014, Modi began campaigning for Lok Sabha elections with "Maa Ganga ne bulaayaa hai" (Mother Ganga is calling for me) at the time of filing his nomination from Varanasi before making the Namami Gange project the keystone of his government. The Mahakumbh at Prayagraj was also drummed up as an event to claim that the Ganga had never been cleaner before.

BD Tripathi, a professor at BHU, laughs when asked about pollution in Ganga. He says, "Look up the latest report of the Central Pollution Control Board, it may not be true but then it is an official document."

Despite that all Kanpur tanneries have been shut down on the orders of the Uttar Pradesh government, Mishra claims to have found Ganga waters polluted at Prayagraj too. Untreated effluents discharged from these tanneries are a major source of river pollution. The other is sewage from drains flowing into almost all rivers including Ganga.

A shocking report has emerged from the data collected by Sankat Mochan Foundation's Ganga Laboratory at Tulsi Ghat. It shows faecal coliform count has increased at upstream Nagwa from 4.5 lakh in January 2016 to 3.8 crore in February 2019.

The downstream count has risen from 5.2 crore to 14.4 crore during the same period. The most probable number (MPN) of total coliform organism per 100 ml should be 500 or less in "outdoor bathing water".

"People drink Gangajal thinking it is free of all impurities. Imagine the effect of such high quantity of faecal coliform on people's health," asks Mishra.

It is not just the increased presence of coliform bacteria that is worrisome but also the biochemical oxygen demand which has risen significantly from 46.8-54 mg/l in 2016 to 66-78 mg/l in February 2019.

That the pollution control board cannot be relied upon is proved by pollution in Varuna, a tributary of the Ganga. In January 2019, a team of Eastern UP Rivers and Water Reservoirs Monitoring Committee during a surprise inspection found animal blood from Ardali Bazar flowing into the Varuna.

Neither the Pollution Control Board members nor the municipal corporation officials were aware of this discharge.

This is when Uttar Pradesh is the most populous and politically important state in the country. The State sends 80 Members of Parliament (MPs) to the Lok Sabha, which is 15 per cent of the lower house's strength.

The committee was constituted by the NGT in December 2017 after it found that "Ramgarh Lake, Ami River, Rapti River and Rohani River in and around Gorakhpur were severely polluted owing to discharge of untreated sewage and industrial effluents".

The case of Gomti River at Lucknow is as worse.

During an inspection in February 2019, the UP Solid Waste Monitoring Committee appointed by the National Green Tribunal found animal remains dumped by meat shops into the Kukrail nullah at Lucknow which flows into the Gomti.

The committee found 280 million litres daily (mld) of sewage flowing into the river untreated. Against a capacity of 400 mld, only 120 mld sewage was being diverted for treatment to Bharwara treatment plant.

Meanwhile, after Swami Gyanswarup Sanand and veteran environmentalist GD Agarwal died while fasting to save the Ganga, another sadhu, Brahmchari Atmbodhanand's fast has entered 154th day.