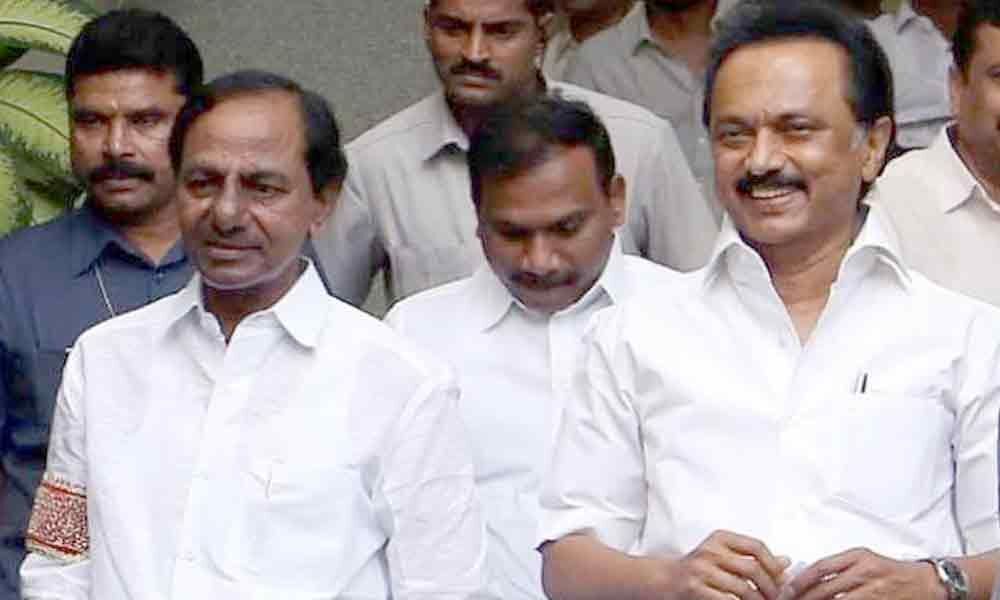 The efforts of the TRS chief to stitch together a Federal Front appears to be a strategic move to make the 21 non-BJP parties to ponder over the arithmetic outcome on May 23.

The efforts of the TRS chief to stitch together a Federal Front appears to be a strategic move to make the 21 non-BJP parties to ponder over the arithmetic outcome on May 23.

It all boils down to how many seats Congress would win. According to TRS estimates, Congress may not cross 100. This makes regional parties stronger than Congress.

It expects Congress to support regional parties form the government than let Modi-led NDA rule for another term. This gives more leeway to the regional parties which can elect a consensus Prime Minister.

This calculation makes the fragmented 21 parties, for now which are on a 'single platform', put on the fence. Enticing a few of them, TRS chief K Chandrashekar Rao has been on a 'Federal tour' to enlist support of such parties.

The premise of TRS chief is that national parties be it Congress or BJP have little interest in the states.

When regional parties have a say in the national politics, the states can demand reasonable share. This, KCR has been trying to convince leaders from left, right and centre.

Odisha CM Naveen Patnaik and YSRC leader YS Jagan Mohan Reddy are already on KCR's side, which puts nearly a strength of 45, according to political pundits.

After the poll results, if there is no move from any of these 21 parties, KCR will be left with very few options.

"The only option left with TRS is to give outside support to any dispensation in case of a fractured verdict," says a political analyst.

In case of Congress not getting enough numbers, a few of the 21 parties, who do not want TRS to lend support to Modi-led NDA alliance be it outside support or issue-based support, may jump on to the Federal bandwagon in a bid to stop the BJP from forming the government again.

This decision could be more of preventing the BJP from the power centre than the issues raised by KCR on federal powers, including proportionate distribution of taxes.

DMK leader MK Stalin, who has been strongly being with Chandrababu Naidu-led non-BJP front, had a short meeting with Federal Front proposer K Chandrashekar Rao recently.

This meeting kept the other partners of the Naidu front on tenterhooks for MK may yield to the enticing factors of Federal Front that regional parties will have more power in devising policies and laws.

To put things in clarity, Stalin sent his emissary Duraimurugan, DMK treasurer, to meet Chandrababu Naidu in Amaravati to put their Chennai meeting in perspective.

It is common knowledge that Stalin had politely rejected the Federal overtures of KCR and instead sought TRS support for the Congress-led front.

Though Duraimurugan was on a mission, his visit was termed as a 'private visit' by the TDP.

After the Chennai jolt, TRS in a turnaround, indicated that it was not averse to be part of the Congress-led front coordinated together by Chandrababu Naidu.

The TRS decision just before poll results in a week's time assumes significance.

But the TRS move comes with a rider: The business with Rahul-led front should give the driver's seat to the Federal Front and let it run the government.

In all probability, this move appears impractical for TRS which is expecting 16 seats do not hold bargaining power to steer the nation with an amalgamation of regional parties.

This is exactly what is misunderstood of KCR's move of the Federal Front. His only insistence is for a PM from regional party not TRS.

In all private talks this message has been strongly stressed. But there are few believers who are programmed to look towards the national parties for leadership.

If May 23 restricts Congress at the 100 mark, the foresight of KCR becomes evident, which no other 21 opposition parties have seen it coming.

In a first for Indian politics, alliance politics takes a new turn ushering in power of regional parties, which was seen since the formation of Telugu Desam Party and Asom Gana Parishad way back in the 80s.