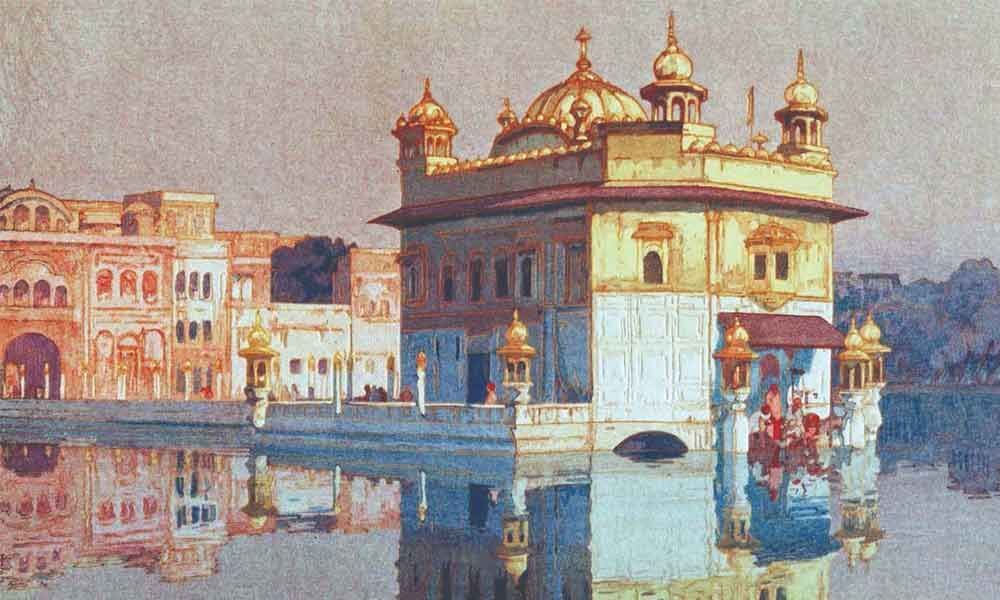 Both Bertrand Russell and Winston Churchill were vocal supporters of the Sikh community; the former, for their compassionate culture, the latter, for the loyalty they showed during two great wars, where they fought for the Empire.

Both Bertrand Russell and Winston Churchill were vocal supporters of the Sikh community; the former, for their compassionate culture, the latter, for the loyalty they showed during two great wars, where they fought for the Empire.

Though this acknowledgment of both intrigue and fealty by instruments of the Raj is perhaps an extension of a long-running colonial romance, the Sikhs have been vetted and honoured on foreign soil unlike any other community from the country.

Though it is, to an extent, a contrast to the end of Ranjit Singh's Sikh empire which was reined by the British, the peculiar attention and adulation showered on these colonial subjects is a notable aspect of history.

To that effect, a collection of some 80 artworks by European artists, whose subjects are the Sikh faith, culture and some of its famous personalities, is being showcased for the first time in India as part of the exhibition titled The Sikh: An Occidental Romance.

This exhibition is made of up of archival replicas of original artworks that are scattered across the world. "The process of creating a replica is fairly complex.

It can be done only in two or three places in the world. The ink is made in Japan, the printing is done in Germany. So, it is a coming together of various methods and technologies.

We shoot several thousand photos of a single artwork, to create the highest resolution possible and then print it," says Gautam Srivastava, founder of The Hubris Foundation, which has put together the exhibition.

Srivastava explains why exhibiting the 80 replicas in one place is more momentous than the experience of seeing each of the originals, given the possibility of that happening is slim. "To see the originals, you would have to travel to at least 20 countries around the world.

A lot of these works are part of private collections that people won't even be prepared to show to you.

When I started this project, I could have gotten a couple of the original works here in exchange for a few millions, but what I wanted was to offer a full spectrum," he says.

Of the paintings on display, the most notable ones are the famous portraits of Maharaja Ranjit Singh and his son Maharaja Duleep Singh, who was exiled to British shores.

Aside from the portraits, some of which are rare in themselves, there are others like Edwin Lord's painting of the Golden Temple, paintings of the Jallianwala Bagh massacre, and easels of Lahore from the Russian prince Alex Soltykoff's collection.

"One of the hardest things we had to do was the research. Some of these paintings were hard to locate. At first, not everyone was willing to be part of this project, which is why it has taken me six years.

We started in 2011, after I saw a couple of Sikh paintings and thought to myself, there was something unique in the way occidental artists saw these people. How rare is it that a colonial power imagines its subjects in such a light?

"There is something there," Srivastava says.

Maharaja Duleep Singh was one of the first Indians to set foot on British land. He remained a popular figure in local circles till the day he died. Is it merely an interest in the exotic? "I think there is veneration and respect.

They saw other Indian communities as raw and vile, but the Sikhs they adored to a great extent," Srivastava says.

In getting to some of these works, Srivastava's research has taken him to interesting places. "A painted done by Alfred De Dreux was presented to King Louis-Philippe of France.

We found the painting in the godown of the Louvre. So the journey to that work was a long one. It involved first discovering that the painting existed, and then getting to it," he says.

There is little doubt, given the evidence of these works, that the Sikhs enjoyed the kind of pageantry that other native Indians did not during British rule.

As Srivastava explains, most Indians were relegated to being lean, bent black figures appearing in the corners of canvasses.

The Sikhs, on the other hand, even in commissioned works of places and scenes, are largely at the centre, resolute and glowing. About this obsession, Srivastava says it was perhaps an admiration of sorts.

"They found the community fascinating, honourable and beautiful, as I see it. When Maharaja Sher Singh's portrait was exhibited in Vienna, almost a million people came to see it.

And everyone acknowledged that he was a handsome man." To an extent this also explains the near-universal adaptability of the Sikh community around the world, and Queen Victoria's adoration for her political prisoner, Duleep Singh.

Adoration that Srivastava says these works continue to receive in Europe. "What a beautiful people, they all say."