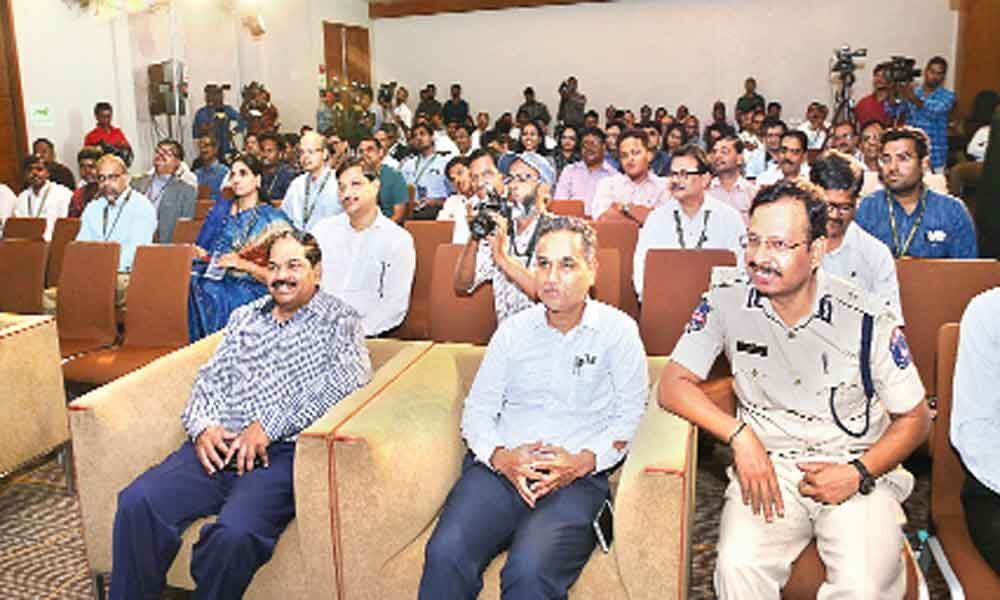 City Police Commissioner Anjani Kumar said in today's digital world where a small electronic chip is dominating the human intelligence, cybercrime has turned as one fo the biggest threat to the society and is posing challenges to the police across the world to tackle it.

Hyderabad: City Police Commissioner Anjani Kumar said in today's digital world where a small electronic chip is dominating the human intelligence, cybercrime has turned as one fo the biggest threat to the society and is posing challenges to the police across the world to tackle it.

Addressing a conference of Association of Certified Fraud Examiners (ACFE) on 'Fraud and the Future,' the CP opined that through better awareness and alertness only the common people in the society can be saved from the clutches of cyber offenders. ACFE is the non-profit Anti-Fraud Organization and premier provider of anti-fraud training and education. It is headquartered at Austin, USA, and has chapters all over the world including India with around 85,000 members globally.

The Hyderabad CP explained the stages and categories of crime and he has given various examples of cyber frauds. He also detailed how crime has come down after implementation of technology in prevention and detection of crime. He also spoke about the various digitisation initiatives by the government in Telangana state. The Commissioner also launched the website of the ACFE Hyderabad chapter and presented mementos to the event sponsors.

Elaborating on the frauds and the future, Anjani Kumar said the cycle patrolling started during Nizam's regime in Abids area in 1912, the present-day's cyber patrolling, the cyber offenders posing biggest challenges to the police to save their common public from the clusters of them.

Citing an example, CP said, a smallest village in Jharkhand by name Jamtara where the literacy rate is very low, producing highest percentage of Cybercrime offenders. The Cybercrime offenders there are posing themselves as biggest cyber professionals. He opined that so much of computerization made the entire world to become chip oriented there by led to occurrence of highest number of cybercrime offences.

Comparing the Hyderabad with New York in terms of population and the police stations, Anjani Kumar said the Hyderabad police was performing in terms of reduction of crime rate in culpable homicides, murders (5 times less in Hyderabad than New York), gunshots (200 times less) and crime against women and children (10 times less). He said through CCTV installations, FRS (Facial Recognition System) and e-challans, the city police brought down the crime rate marginally.

V C Sajjanar, the Commissioner of Police, Cyberabad, spoke at length about the money siphoned off by various Ponzi schemes. He said fraud companies in the name of 'God, health and MLM, and Ponzi schemes' were cheating the innocent people. Speaking on economic and cyber frauds, he said that for earning easy money the less educated people are encashing the greediness of people in the society, by applying short cut ways to cheat the innocent public. He said they were targeting the people in the name of god and health and ruining families by trapping their bank accounts and OTPs. Crores of rupees were siphoned by the fraud companies through multi-level marketing and Ponzi schemes by targeting students, women and rural people. CP said innocent people lost Rs 7 lakh crore through Ponzi schemes till now. He said Rs 400 crore had been seized from five MLM and Ponzi scheme companies whom they busted recently and booked cases against the owners. By relinquishing the greed to make quick and easy money and enrolling in any MLM and Ponzi schemes, one can protect them from the economic offenders, he advised.

There was a panel discussion on 'Ethics in Corporate world' moderated by P Sharath Kumar, and the speakers were Mani Padmanaban, Krishna Sastry Pendyala, Pratyush Singh and B Prabhakar.