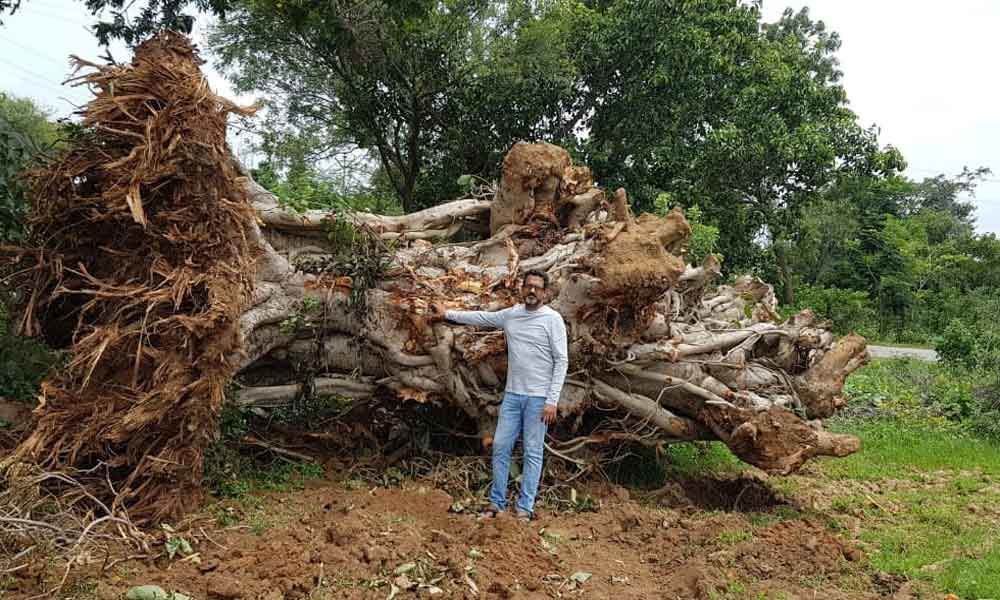 People think that translocating trees, especially fully grown and old trees is not possible but P Uday Krishna, founding trustee of Vata Foundation believes one can and has shown how it is done.

Hyderabad: People think that translocating trees, especially fully grown and old trees is not possible but P Uday Krishna, founding trustee of Vata Foundation believes one can and has shown how it is done. Till date 2,000 trees have been translocated. Sharing his journey, Uday says, "I was working on a project in Kukatpally where 16 trees were to be felled, so the government gave permission to cut down eight and translocate the remaining.

He further adds, "There is no expertise available and no guidelines. The officer said these trees were not suitable for relocation. I had a JCB and a crane which I used them to remove the trees and identify a lane beside the project So, I asked the owners if I plant the trees to which they happily agreed. So, I moved the 16 trees out of which 13 survived that is how the relocation of trees began."

We do not use any chemicals, the only thing I ensure is the trees to be planted back as soon as possible. The challenges we face are if we get 100 trees for relocation there must be 100 people to own up those trees which is difficult to find in such a short span of time. Every project has this situation where we have to look around for people to find them as early as possible within a range where transportation can also be done quickly. As the tree size increases the cost also goes up, initially it all came out from my own pocket.

If it is a government project the government provides us with all the necessary equipment and other essentials if it's a private call we have to arrange everything on our own so here we somehow managed to find a way where the cost is very minimal and is contributed," added Uday.

Under the same cause, they are now working on a new initiative called 'Tree Directory' which is basically going to be tools for the common man to ensure that the greenery around him is saved. In villages, we see those big old trees which the villagers want to save it from any development activity.

The idea is to start a mobile application where the person has to take a picture of the tree with all the proper geotags and description and upload it. We will gather enough data of such old trees across Telangana and send it to the government to identify them as heritage structures to avoid them from any future development around them.

Apart from translocation of trees the initiatives Vata Foundation is involved in saving the tiger by providing a drone to monitor forest fire and are currently operating in Tipeshwar Wildlife Sanctuary, Yavatmal, Maharashtra where they have adopted the jungle unofficially.

For the last five years around 3,500 saplings and cleaning of the jungle has been done under save the tiger initiative. Proper jacket and boots are given to forest staff and ground staff. Artificial water ponds have been developed.

Tiger corridors are basically a connecting junction between two jungles where it is not interrupted by human activity and it is safe for the animal to commute from one jungle to another. Building a safer passage for the animals to commute will reduce fewer animal accidents on the road and animal-human interactions are also an initiative that Vata Foundation has taken upon itself.