Brazil says it is successfully controlling fires in Amazon 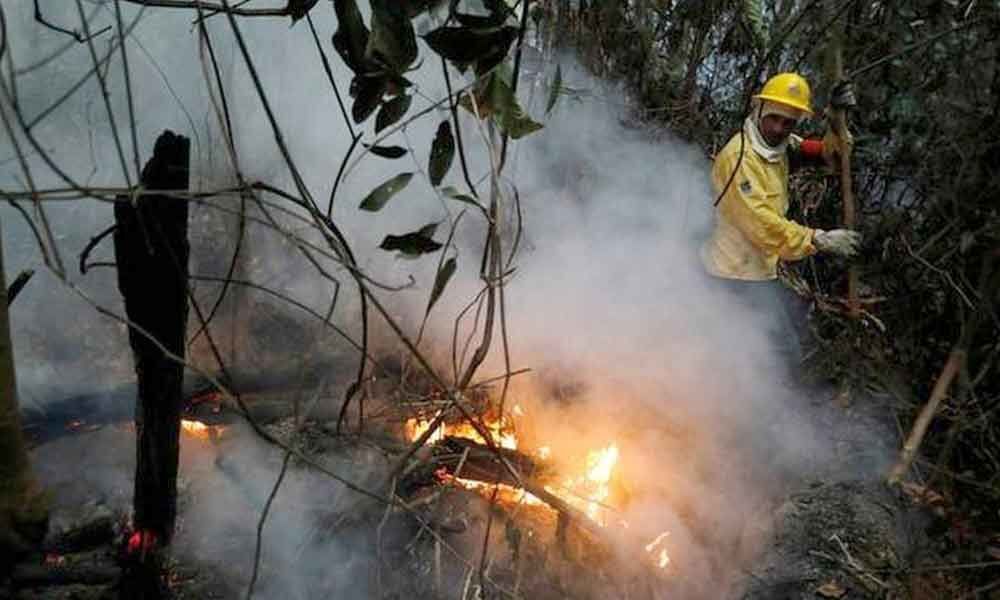 Brazil’s Foreign Minister on Friday said that his country is successfully extinguishing the fires in the Amazon region that have generated international concern after discussing the situation with President Donald Trump at the White House.

Brazil's Foreign Minister on Friday said that his country is successfully extinguishing the fires in the Amazon region that have generated international concern after discussing the situation with President Donald Trump at the White House.

Brazilian President Jair Bolsonaro said earlier in the day that his son and Foreign Minister Ernesto Araujo were heading to Washington to discuss possible U.S. aid in fighting the fires. The far-right President said he asked Mr. Trump for help and the U.S. President had said that "he couldn't make a decision without hearing from Brazil."

Mr. Araujo told reporters after meeting with Mr. Trump that the fires "are not an excuse to promote ideas of international management of the Amazon," though he said the South American country is open to cooperation with other countries.

"The fires that exist today are already being fought and we are being successful in extinguishing most of the fires," he said, adding that the meeting with Mr. Trump did not bring up specific U.S. aid.

Mr. Bolsonaro is considering appointing his son, Congressman Eduardo Bolsonaro, to be ambassador to the U.S., though the posting would need to be approved by the upper house of the Brazilian Congress.

Mr. Araujo said the Trump administration had already expressed its approval to a possible ambassadorship of Congressman Bolsonaro. "Now we have to wait for the Senate to approve hopefully the invitation," he said.

Mr. Araujo said the fact that Mr. Trump hosted both him and theCongressman at the White House even though they are not heads of state "shows how far we are in building a very special relationship with the United States."

The compliments about the relationship with the Trump administration contrast with criticism of Brazil's government from French President Emmanuel Macron and some other European leaders.

A $20 million offer of aid from the Group of Seven nations to help fight fires and protect rainforest stalled after Mr. Bolsonaro said Mr. Macron would have to apologize for remarks he had made. Mr. Macron had questioned Mr. Bolsonaro's trustworthiness and commitment to environmental safeguards in a sharply personal dispute between the two leaders.

"All of Europe, together, doesn't have any lessons to pass to us when it comes to preservation of the environment," the Brazilian President said.

Mr. Bolsonaro later tweeted that he had a "productive" phone call with German Chancellor Angela Merkel, saying she reaffirmed Brazil's sovereignty in its Amazon region.

Journalists had asked Mr. Bolsonaro about the possible resumption of donations to a Brazilian government fund for the Amazon. Norwegian donations, amounting to tens of millions of dollars, were suspended this month because of concerns about Brazil's commitment to the environment. Germany has also suspended a separate line of funding for Amazon projects.

"We want to know where this money will go," Bolsonaro said. "Usually it goes in part to NGOs, which gives no return. In part it goes to good things ... but it's a lot of money for little preservation."

Mr. Bolsonaro also said that past allocations of land to indigenous people, many of whom live in the Amazon rainforest, had been excessive. About 14% of Brazil is indigenous territory, a huge area for a relatively small population, the president said.

Some indigenous leaders say their communities are under pressure from farming and ranching expansion and complain that authorities are doing little to enforce environmental law.

Without offering evidence, Mr. Bolsonaro initially suggested that non-governmental groups started the fires to try to damage the credibility of his government, which has called for looser environmental regulations in the world's largest rainforest to spur development. Critics say his policies and promises have motivated ranchers and loggers to move into the Amazon, sometime setting fires to open land for farming and pasture.

On Thursday, Brazil banned most legal fires for land-clearing for 60 days in an attempt to stop the burning. Many of the current fires were set in areas already cleared of trees.

About 60 percent of the Amazon region is in Brazil. The Amazon's rainforests are a major absorber of heat-trapping carbon dioxide from the atmosphere.