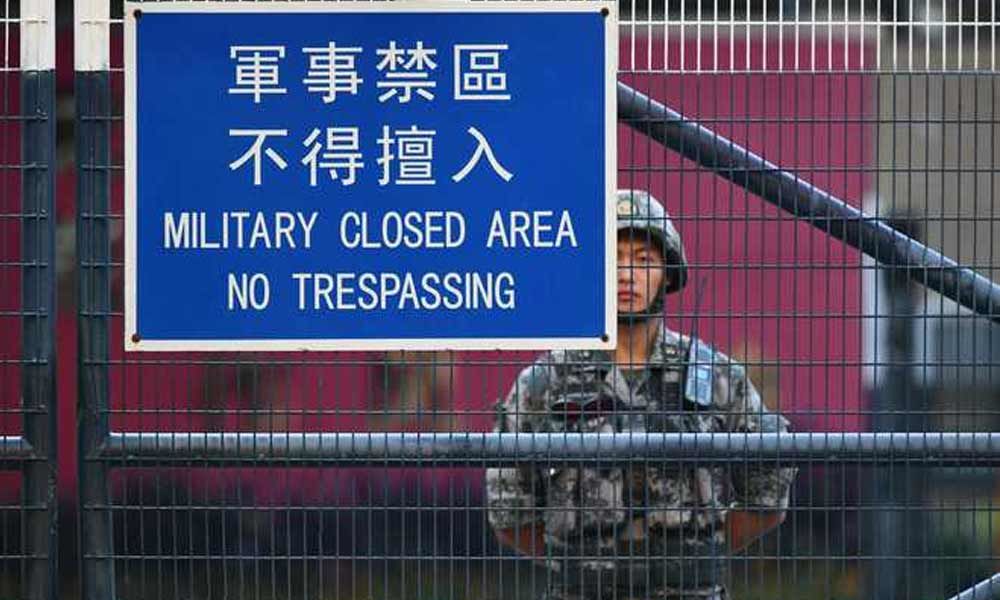 Beijing: China on Saturday deployed its troops in Hong Kong for the first time since the unprecedented pro-democracy protests began in the former British colony more than five months ago over a proposed extradition law, with soldiers in plain clothes clearing the roadblocks. Soldiers from the Hong Kong Garrison of People's Liberation Army (PLA) -- the world's largest military -- have been deployed for the first time in more than five months of civil unrest in Hong Kong, as dozens marched from their Kowloon garrison to help clear roadblocks, Hong Kong-based South China Morning Post reported. It was also the first time in over a year that the PLA local garrison has been involved in the public community work.

The soldiers, mostly in green T-shirts and black shorts, and carrying red buckets, ran out of the PLA's Kowloon Tong barracks at about 4 PM to clear obstacles on Renfrew Road, near Baptist University's campus, the report said. A soldier said their action had nothing to do with the Hong Kong government. "We initiated this! Stopping the violence and ending chaos is our responsibility," he said, quoting a phrase coined by President Xi Jinping. Firefighters and police officers also joined the soldiers.

Earlier, Hong Kong Secretary for Security John Lee Ka-Chiu said the PLA could freely decide on whether to send soldiers to perform volunteer services outside military sites and the local government had no record of how many times this has happened. In October last year, more than 400 soldiers were sent in batches to Hong Kong's country parks to help remove trees felled during Typhoon Mangkhut. China earlier said under Article 14 of the city's Garrison Law and Basic Law -- the city's mini-constitution, the PLA must not interfere in local affairs but troops can be called out to help with disaster relief if requested by the local government. Such a request has never been made since the city returned to Chinese rule 22 years ago.

On Thursday, Xi broke his silence over Hong Kong's unprecedented pro-democracy protests threatening China's control over the former British colony, saying the most pressing task at present was to bring violence and chaos to an end and restore order. Xi made the comments at the 11th BRICS Summit in Brasilia, China's state-run Xinhua news agency reported. Hong Kong is rocked by unprecedented pro-democracy protests for over five months and in the past few weeks, they grew violent, bringing the international financial centre virtually to a grinding halt. The protests which began over a proposed extradition law by the Hong Kong administration sparked fear of extradition of locals to the Chinese mainland for prosecution. It later turned into a major pro-democracy movement with demands to elect their local officials without the Chinese interference.

The protestors, main youth, are demanding pro-China Chief Executive Carrie Lam's resignation, the inquiry into police brutalities and universal franchise of 'one person one vote' with freedom for all the locals to contest elections for the local legislature. Xi said the continuous radical violent activities in Hong Kong seriously trampled the rule of law and the social order, seriously disturb Hong Kong's prosperity and stability, and seriously challenge the 'one country, two systems' bottom line, the Xinhua report said.

This is the first time Xi, regarded as the most powerful leader since Mao Zedong, spoke directly about the situation in Hong Kong, the former British colony handed over to Beijing in 1997. Xi currently heads the ruling Communist Party of China (CPC), the military besides the Presidency with prospects of a lifelong tenure in power. Last month during his visit to Nepal, Xi was quoted as saying that any attempts to drive a wedge between China and its territories will "end in crushed bodies and shattered bones". He, however, did not name any particular province or region. Nepal borders Tibet from where many Tibetans crossover to Dharamsala to visit the Dalai Lama. "And any external forces backing such attempts dividing China will be deemed by the Chinese people as pipe-dreaming!" Xi added.