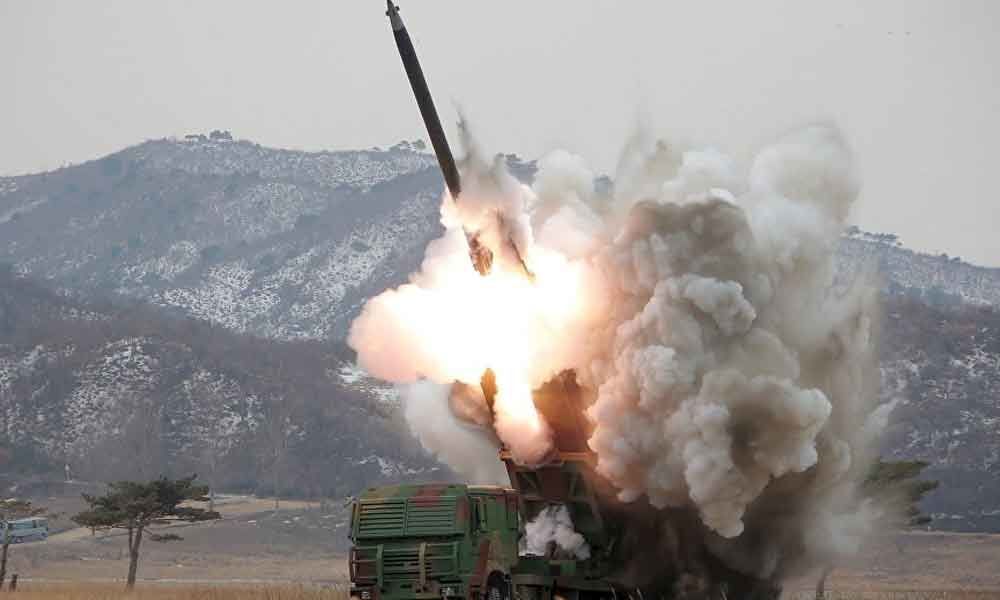 North Korea said Sunday it had tested long-range multiple rocket launchers and tactical guided weapons, a day after Pyongyang appeared to have launched its first short-range missile in more than a year.

North Korea: North Korea said Sunday it had tested long-range multiple rocket launchers and tactical guided weapons, a day after Pyongyang appeared to have launched its first short-range missile in more than a year.

The announcement on the "strike drill", which the Korean Central News Agency said took place Saturday and was overseen by Kim Jong Un, came after US President Donald Trump voiced confidence that the North Korean leader would not "break his promise" even as nuclear talks have been deadlocked.

KCNA said the tests in the East Sea, also known as the Sea of Japan, aimed to "estimate and inspect the operating ability and the accuracy of striking duty performance" of the weapons.

Kim was also evaluating "the combat performance of arms and equipment," according to KCNA.

Kim urged his troops to bear in mind "the iron truth that genuine peace and security are ensured and guaranteed only by powerful strength," it added.

On Saturday, the North also fired "a number of short-range projectiles" from Hodo peninsula near the east coast town of Wonsan starting at 9:06 am (0006 GMT), the South's Joint Chiefs of Staff said in a statement.

The projectiles traveled northeast from 70 to 200 kilometers (45 to 125 miles) toward the East Sea.

In an earlier statement, it had said Pyongyang launched an unidentified short-range missile.

"Anything in this very interesting world is possible," Trump tweeted in reaction to the launches announced by the South Koreans.

"But I believe that Kim Jong Un fully realizes the great economic potential of North Korea, & will do nothing to interfere or end it," he added.

"He also knows that I am with him & does not want to break his promise to me. Deal will happen!"

Since their historic summit meeting in Singapore in 2018, Trump has said Kim remains committed to the "complete denuclearization" of the Korean peninsula.

He has insisted the two leaders remain close even after their follow-up meeting in Hanoi collapsed in February, and that Kim would maintain his moratorium on long-range missile and nuclear tests.

But with negotiations lagging, the North appears to be testing the US side.

The launches followed last month's test-firing of very short range tactical weapons, and it came days after a senior North Korean diplomat chastised US Secretary of State Mike Pompeo for making "foolish and dangerous" comments in nuclear talks with the North.

The two sides have been clashing over the North's demand for substantive economic sanctions relief and the US's insistence that the North make concrete concessions toward eliminating its atomic arsenal.

But a statement from South Korea's presidential Blue House said it was "greatly concerned," calling it a violation of a military agreement signed by both Koreas last year.

The last North Korean missile launch was in November 2017.

"North Korea's recent missile launches are a provocation at a time when the international community is awaiting concrete steps from North Korea to abandon its nuclear weapons and missile program," a spokesman for the German Foreign Ministry said.

"We welcome President Trump's declaration that he is ready to continue to support the negotiations process despite this provocation."

On Friday, South Korean Foreign Minister Kang Kyung-wha said Pyongyang should show "visible, concrete and substantial" denuclearization action if it wants sanctions relief -- the issue at the center of the Hanoi debacle.

Earlier this week, North Korean Vice Foreign Minister Choe Son Hui warned Washington of an "unwanted outcome" if it did not adjust its stance on economic sanctions.

Hodo Peninsula, where the projectile firing took place, has been used since the 1960s for "live-fire testing, training exercises for artillery and coastal defense cruise missiles," according to the respected 38 North website.

In recent years, Hodo has been "increasingly used for ballistic missile and long-range artillery rocket testing," it added.

Since the collapse of the Hanoi summit, South Korean president Moon Jae-in -- who brokered the first meeting between the mercurial US and North Korean leaders -- has tried to salvage diplomacy, but Pyongyang has remained largely unresponsive.

Last week, on the anniversary of the Panmunjom summit between Moon and Kim, KCNA said Washington and Seoul "keep pushing the situation of the Korean peninsula and the region to an undesirable phase", criticizing their joint military exercises.

The launches come just days before US special representative Stephen Biegun is to visit Japan and South Korea.

Washington had said Biegun would discuss "efforts to advance the final, fully verified denuclearization of North Korea" with officials in Seoul and Tokyo.