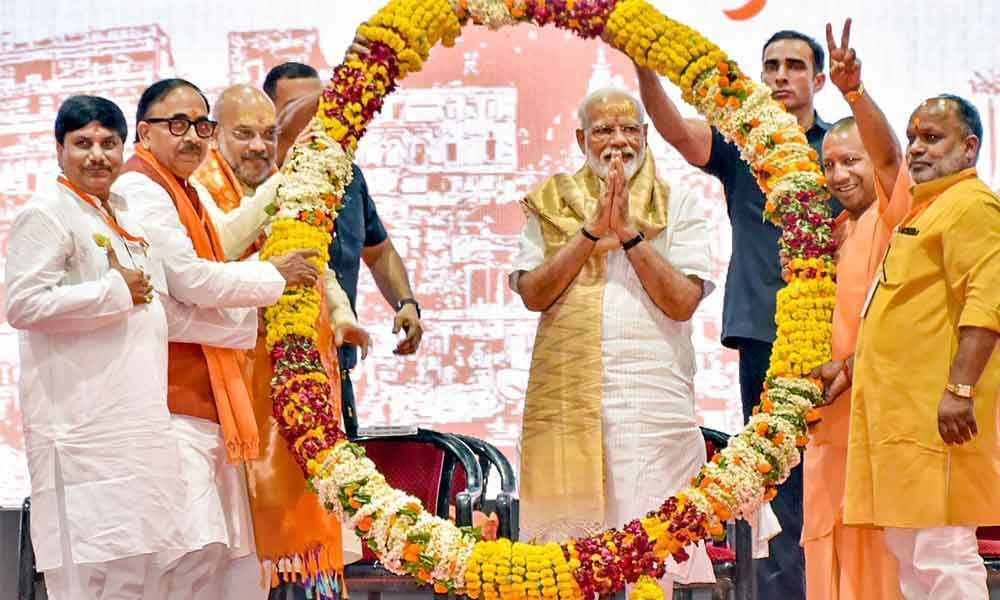 He was speaking during a thanksgiving visit to his constituency Varanasi on Monday after winning from the temple city by nearly 5 lakh votes and leading the NDA to a landslide win in the Lok Sabha elections.

Even after this, if the eyes of political pundit do not t open, their ears do not hear the sound, then they are living in 20th century.

Political pundits have to agree that there is chemistry beyond poll arithmetic," the PM said, while addressing party workers in Varanasi.

Modi visited the famous Kashi Vishwanath temple in the city and offered prayers. He was accompanied by BJP president Amit Shah and UP chief minister Yogi Adityanath.

The Prime Minister in his pre-election trip to the constituency had addressed the party workers telling them 'each one of you is Modi' and that they had to run his campaign in his absence.

He had also held a massive roadshow before filing his nomination papers on April 26.

On Monday, Varanasi was all decked up to welcome Modi with BJP flags and posters everywhere. On Sunday, Uttar Pradesh CM Yogi Adityanath held a meeting with local administration officials in Varanasi to assess preparations made ahead of Modi's visit.

He reviewed developmental works and sought information about the progress of the Kashi Vishwanath Corridor project.

Adityanath laid emphasis on maintaining cleanliness in Varanasi, which draws tourists from across the globe.