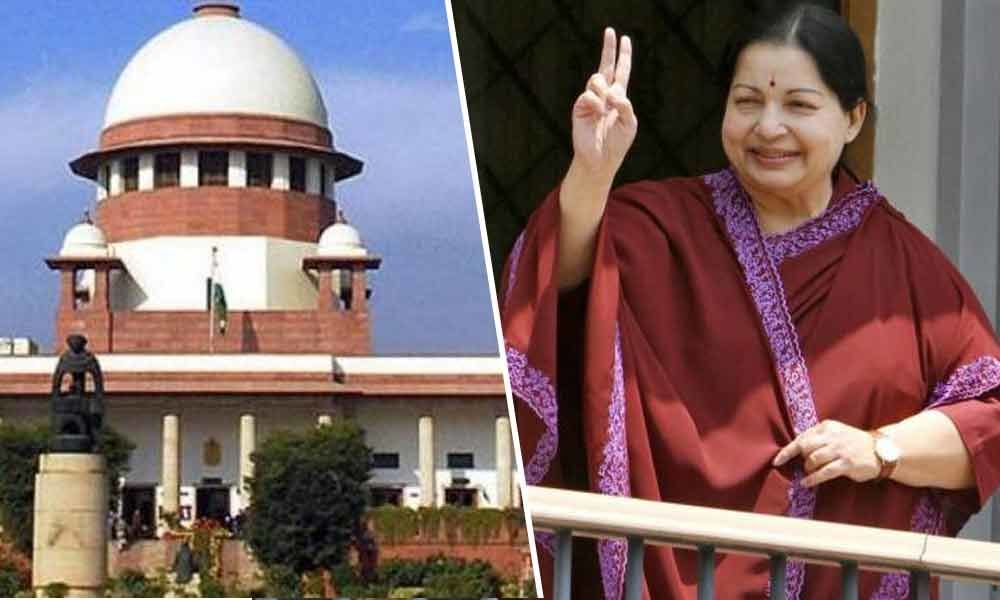 The SC bench said two accused have died and the high court had observed that there was an inordinate delay in filing the case, so there is no point in interfering with the 2011 order.

NEW DELHI: The Supreme Court on Tuesday refused to interfere with a 2011 order of the Madras High Court quashing a case against former Tamil Nadu Chief Minister J Jayalalithaa and two others for allegedly receiving unaccounted gifts worth over Rs two crore.

Jayalalithaa and former minister Azhagu Thirunavukkarasu, who were arrayed as accused by the CBI in the case registered in 1996, have died while the third accused, K A Sengottaiyan, is a minister for school education in the present AIADMK government in Tamil Nadu.

Rejecting a CBI plea, a bench of justices R Banumathi and A S Bopanna said since two of the three accused in the case have died and the high court had observed that there was an inordinate delay in filing the case, there is no point in interfering with the 2011 order.

Senior advocate Vibha Datta Makhija, appearing for the CBI, said there was no delay in filing the case and the high court had committed an error in quashing the entire case proceedings.

She contended that the high court order will set a wrong precedent and is liable to be set aside.

To this, the bench said in the facts and circumstances of the case and in wake of the observations made by the high court on delay in filing the case, it would not like to interfere with the order of 2011.

In 2012, the apex court had sought response from Jayalalithaa and two others after the CBI had challenged a 2011 order of the Madras High Court.

The agency had contended that the high court had not considered various aspects of the case in accordance with law.

The high court had on September 30, 2011, after considering the allegation, quashed the entire proceeding and said, "There is absolutely no justification for subjecting the petitioner (Jayalalithaa) to undergo the ordeal of trial after the inordinate and unexplained delay and further continuance of the criminal proceedings pending against her would certainly amount to abuse of process of Court".

The high court had also granted similar relief to Thirunavukkarasu and Sengottaiyan and quashed the proceedings against them.

The CBI's case relates to Jayalalithaa allegedly receiving unaccounted gifts worth around Rs 2.09 crore in 1991.

It had said that though the alleged transaction had taken place between 1990 and 1993, the irregularities had come to light only in 1996 and hence there was no delay in filing the case.

The probe agency had contended that the case was registered on a letter written by the Director General of Income Tax (Investigation), Chennai which said that Jayalalithaa has disclosed in her income tax returns regarding the gifts including Demand Drafts and cash given to her on the occasion of her birthday totalling to an amount of Rs 2,09,50,012.

The CBI had said that the genuineness of the gifts has not been proved and hence on the basis of the letter of the Income Tax department the FIR was registered for the offences under Sections 13(2) r/w 13(1)(e) of the Prevention of Corruption Act.

The charge sheet in the case was filed by the CBI in 2006, in which it was stated that investigation was conducted with respect of 89 demand drafts (DDs) and Rs 15 lakh cash.

Out of these 33 persons, 21 persons, who had gifted DDs, were MLAs, ministers or party leaders appointed as Chairman of Government Corporations and other Government bodies.

The allegation as per the charge sheet against Thirunavukkarasu and Sengottaiyan was that both of them were ministers in the Cabinet of Jayalalithaa during the relevant period and provided an amount of Rs 22.53 lakh and Rs 25.50 lakh respectively for the purchase of DDs in favour of then chief minister and presented the same on her birthday in 1992.