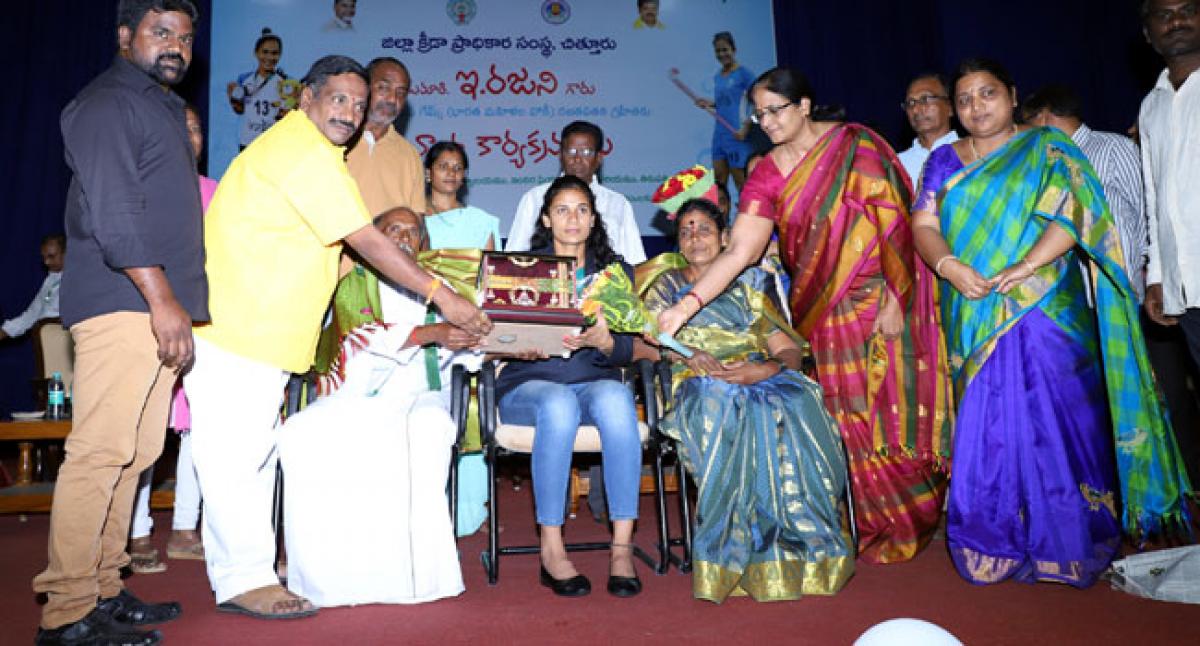 E Rajani, the goalkeeper in Indian womens hockey team that won silver in 18th Asian Games held in Jakarta from August 18 to September 2, has set her goal on winning gold medal in 2020 Olympics

Tirupati: E Rajani, the goalkeeper in Indian women’s hockey team that won silver in 18th Asian Games held in Jakarta from August 18 to September 2, has set her goal on winning gold medal in 2020 Olympics.

After participating in the Asian Games, she reached Tirupati on Friday and received a rousing welcome from students, sports players and officials at the Airport. Later, she was felicitated at Sri Padmavathi Mahila Visva Vidyalayam (SPMVV) Auditorium by District Sports Authority (DSA), SPMVV, Municipal Corporation of Tirupati (MCT) and Tirupati Urban Development Authority (TUDA).

Speaking to The Hans India on the occasion, Rajini, an employee of Indian Railways, has said her focus is on 2020 Olympics even though she had participated in other tournaments. In 2016, Indian team ended up with Bronze medal at Rio Olympics.

“I want to make my district, state and country proud by participating in the 2020 Olympics and won gold medal for the country,” she asserted. Born in a middle-class family at a village near Yerravaripalem mandal in the district, she developed interest in the game because of her coaches. She attributed all this credit to her parents and coaches.

Speaking at the felicitation function, she said that so far, she could achieve 50 per cent of her goals and will strive hard to reach remaining goals. “My ambition from childhood was to reach higher levels and see my family at a good position,” she said.

She was very proud that India won a medal in women’s hockey at Asian Games after 20 years. She advised the young students to put all efforts with dedication to reach their goals in any sports/games. Rajani, who visited SPMVV campus, after returning from Rio Olympics in 2016, has expressed her desire to visit the campus again after winning gold medal in 2020 Olympics.

District Collector PS Pradyumna has announced a cash award of Rs 6 lakh as suggested by Chief Minister N Chandrababu Naidu for her in recognition of her achievements. MCT Commissioner V Vijay Rama Raju met her and announced that she will be the brand ambassador of Tirupati smart city project and Swachh Survekshan programme.

Speaking on the occasion, SPMVV Vice-Chancellor Prof V Durga Bhavani has said that Rajani has proved that by being obedient, humble and dedicated one can excel in any field. By winning silver medal at international level, she had an opportunity of becoming a Group-I officer soon and wished her to reach many goals.

TUDA Chairman G Narasimha Yadav has said that she stood as a symbol of hard work and made everyone in the country proud. SPMVV Rector Prof V Uma hoped that Rajani’s visit to the campus will be a motivational factor for their students and asked them to give her a standing ovation. Rajani’s first coach Prasanna Kumar Reddy recalled that she was spotted at the age of eight years as he felt that she could become a good sports woman because of her height.

Though, she participated in several tournaments from 2009 to 2018 at national and international levels by associating with number of coaches and players, she was having the same humbleness even now, he stated.

The CEO of DSA S Lakshmi mentioned that the government has taking several steps to promote sports in the state and TUDA has allotted 140 acres near Tirupati to establish sports city. The Commissioner has been taking special care to develop the Sports Complex in the city. Corporation Deputy Commissioner MVD Phani Ram and others present.