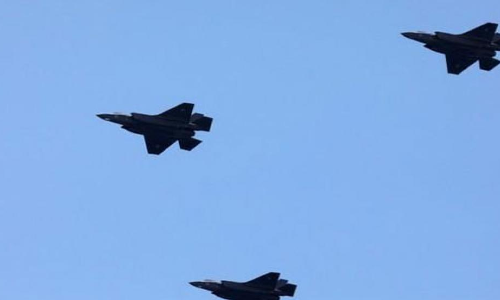 The United States has struck a preliminary deal to buy F35 jets from Lockheed Martin worth about 13 billion, clearing the way for a larger multiyear purchase that aims to bring the cost per jet down to 80 million by 2020, sources said

FARNBOROUGH: The United States has struck a preliminary deal to buy F-35 jets from Lockheed Martin worth about $13 billion, clearing the way for a larger multi-year purchase that aims to bring the cost per jet down to $80 million by 2020, sources said.

The deal for 141 F-35s lowers the price of the F-35A, the most common version of the stealthy fighter jet, to about $89 million, down around 6 percent from $94.3 million in the last deal struck in February 2017, the sources familiar with the talks said.

Bringing down the cost of the world’s most expensive defence programme is crucial to securing more orders, both in the United States and abroad.

President Donald Trump and other U.S. officials have criticised the F-35 programme for delays and cost overruns, but the price per jet has steadily declined in recent years as production increased.

The current “handshake” deal will be solidified along with pricing and other terms in a contract that will be announced in the coming weeks, the sources said, on condition of anonymity because the talks were private.

The agreement with the U.S. Department of Defense removes a crucial road block from the ongoing negotiations for a multi-year deal for the fighters that is expected to consist of three tranches over fiscal years 2018-2020.

The Pentagon and Lockheed Martin “have made progress and are in the final stages of negotiation,” the Pentagon’s head of acquisitions Ellen Lord said in a statement, adding the two sides had reached “a handshake agreement which symbolises the Department of Defense’s commitment to equip” U.S and allied forces, while giving “great value” to the U.S. taxpayer.

Last summer, Reuters reported that F-35 customers including Australia, Denmark, Israel, Italy, Japan, the Netherlands, Norway, Turkey, South Korea, Britain and the United States had aimed to procure 135 or more jets in fiscal year 2018 for delivery in 2020 for about $88 million per jet.

In addition, negotiations were ongoing for the multi-year U.S. deal that was said to be worth more than $37 billion, and encompassing a record 440 F-35 fighter jets.

On Sunday, a Lockheed Martin representative said the handshake agreement on the production contract for the 11th lot of F-35 aircraft was in place, but the total value and cost per variant would be released when the contract was finalised.

The F-35 comes in 3 variants: the F-35A conventional take-off and landing model; the F-35B, a short take-off/vertical landing version; and the F-35C, used aboard aircraft carriers.

The F-35 programme is aiming to grow the fleet to more than 3,000 jets and bring the unit price of the F-35A closer to $80 million in 2020 through efficiencies gained by ordering in larger quantifies.

The jet had production problems in 2017, but Lockheed still hit its 2017 target to deliver 66 to the United States and its allies.

Lockheed is aiming to deliver 91 jets in 2018 and the Bethesda, Maryland-based weapons maker hopes to nearly triple annual production to more than 160 jets in 2023.

Despite the challenges the programme has faced, the jet completed its flight testing in April. In May, Israel said it had been the first country to use the fighter in combat.

New international customers are also possible. In February, the U.S. State Department approved the possible sale of 34 F-35s to Belgium for as much as $6.53 billion. Belgum is due to make a decision on a new fighter later this year.

“It’s a game-changing system,” Wolters told Reuters ahead of the Royal International Air Tattoo military air show in England. “We’re in the process of integrating the F-35 into the complete environment, not just the airspace.”

Norway, Britain and Italy will have received 40 F-35s in Europe by the end of the year.