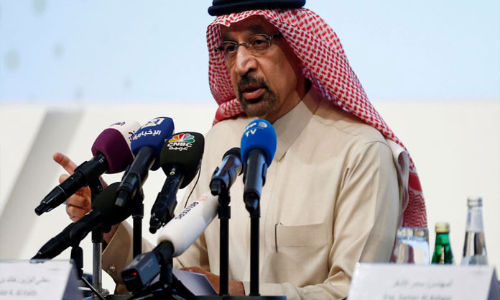 ​NEW DELHI : Saudi oil minister Khalid al-Falih said on Sunday that China and the U.S. would lead healthy global demand for oil this year but that it would be too early to change OPEC+ output policy at the group’s next meeting in April.

In Venezuela, suffering from a political and economic crisis, oil exports have plunged by 40 percent to around 920,000 bpd since Washington slapped sanctions on its petroleum industry on Jan. 28.

On the other hand, production in U.S. hit a record of more than 12 million bpd in February.

The International Energy Agency in a report last month left its demand growth forecast for 2019 unchanged from January at 1.4 million barrels per day.

Falih said Chinese demand was breaking records month after month and estimated the country would breach 11 million barrels per day (bpd) in 2019.

For Saudi Arabia, he said oil output in April was expected to remain at this month’s level of 9.8 million bpd.

“Aramco is finalising their April allocations today or tomorrow so we will know more on Monday. But my expectation is that April is going to be pretty much like March”.

The Organization of the Petroleum Exporting Countries and its allies such as Russia — known as the OPEC+ alliance — will meet in Vienna on April 17-18 and another gathering is scheduled for June 25-26.

Falih said the group was unlikely to change its output policy in April and if required will make adjustments in June.

“We will see what happens by April if there is any unforeseen disruption somewhere else but barring this I think we will just be kicking the can forward,” Falih said.

“We will see where the market is by June and adjust appropriately,” Falih said.

On Jan. 1, OPEC+ began new production cuts to avoid a supply glut that threatened to soften prices. The group agreed to reduce supply by 1.2 million barrels per day for six months.

Sources recently said the OPEC+ production policy is expected to be agreed on in June with an extension of the current pact the likely scenario so far, but much depends on the extent of U.S. sanctions on both OPEC members Iran and Venezuela.

OPEC’s share is 800,000 bpd, to be delivered by 11 members — all except Iran, Libya and Venezuela, which are exempt from cuts. The baseline for the reduction was in most cases their output in October 2018.