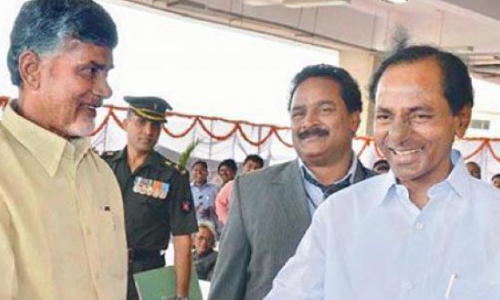 The cloak and dagger game is on both Telugu States In Telangana, Chief Minister K Chandrasekhar Rao is keeping the Opposition Congress guessing on what his next move would be, after giving an impression that he is in favour of early elections to the Assembly In Andhra Pradesh, the Telugu Desam Party is also involved in leading the YSRC up the garden path on what it intends to do with the Congres

The cloak and dagger game is on both Telugu States. In Telangana, Chief Minister K Chandrasekhar Rao is keeping the Opposition Congress guessing on what his next move would be, after giving an impression that he is in favour of early elections to the Assembly. In Andhra Pradesh, the Telugu Desam Party is also involved in leading the YSRC up the garden path on what it intends to do with the Congress.

In both the states, developments that take place daily are at constant variance with what the leaders keep saying, a political strategy which late Prime Minister Indira Gandhi had perfected, in dealing a crushing blow on the Opposition.

Take, for instance Telangana. Chandrasekhar Rao is busy trying to outsmart the Congress. He wants to benefit from the feel-good factor prevailing now in his state after Nature has blessed it with ample rains and farmers are happy after KCR’s first instalment of Rythu Bandhu.

If he strikes the iron while it is hot and goes in for election, it would leave little time for the Congress to put its act together. The Congress is yet not battle ready with internal squabbles continuing in almost all districts. The trick is keep the Congress guessing when he would go in for elections.

For KCR, more than his welfare programmes, what is going to work in his favour is lack of unity among the leaders in the Congress. Even if people want to give an opportunity to the grand old party to repay their gratitude to party matriarch Sonia Gandhi for granting statehood to Telangana, the faction ridden party does not inspire them.

Of late the leaders are speaking openly venting their spleen against other leaders, not caring how it is going to influence the verdict of the people. The latest case in point is former minister DK Aruna admitting openly that she is at loggerheads with former Union Minister S Jaipal Reddy and that she is against allotment of ticket to him for Mahabubnagar Lok Sabha seat.

KCR is keen that by denying tickets to sitting MLAs, he might only be stirring a hornets’ nest. That is why he does not want to upset the apple cart by making changes but lets the same composition continue barring a few changes here and there.

His oratorial skills are always there anyway to swing the mood of the people in TRS favour. This way he would be containing dissidence if any to the barest minimum, thus preventing MLAs turning into rebels and moving to Opposition, in search of greener pastures.

In Andhra Pradesh, Chandrababu Naidu is also keeping everyone guessing on he would want to do with the Congress. There have been reports that the decade-old enmity between the TDP and the grand old party is slowly transforming into friendship in Telangana though not immediately in AP.

Those who have faith in the resurgence of Telugu Desam Party argue that its roots are still intact in parts of Telangana and in Hyderabad and before long one would be able to see green shoots emerging from them if little watering is done.

The Congress which is badly in need of friends to take the mammoth TRS, is looking to the TDP with hope and the TDP is weighing pros and cons as to how people in AP would receive if it joins hands with it since it is but changing the fundamental anti-Congress character of the Telugu Desam party overnight.

The TDP is now looking at the changing patterns in the political kaleidoscope in Telangana. It wants to test the waters cautiously by aligning with the Congress and then after watching the reaction of people in AP, it might take a decision later as to what it should do with the grand old party when the elections draw closer.

Some people argue that for Chandrababu Naidu, it pays to strike alliance with the Congress but he is not willing to make a statement to this effect at least now as elections in AP, unlike in Telangana, will be as scheduled next year. But, sources in TDP, say behind- the- scenes activity is going on and that the TDP leaders are in consultation with former Congress MLAs who still draw some water in their constituencies, either to join the party or discuss with them how beneficial it would be for the TDP if it joins hands with the Congress.

Those argue for TDP-Congress alliance maintain that for Naidu, a pact with the Congress would be of benefit to him, as the party still has some voters left among the SCS and STs who still are faithful to the party because they associate it with late Indira Gandhi who was their benefactor.

Like any port being a good port for a ship caught in a storm, Naidu's Telugu Desam, though in fine fettle, is, however, wary of the challenge from the YSRC, and wants to corner every vote it can lay its hands. In such a scenario, Naidu would be doing the right thing in having an alliance with it.

He can always cede the seats where TDP MLAs are sure lose, to the Congress and in return gain from whatever voters it still has in the state, they argue.

At national level too, it would be convenient for Naidu as at the moment, an effort is going on for formation of an alliance with regional parties against the BJP.

For the alliance not to die in in its infancy, the Congress, the big brother among the Opposition parties, has even consented to the demand that the prime minister would be from the party which has maximum number of MP seats, in the event of the alliance getting a majority in the Lok Sabha elections.

This is where Naidu has an opportunity by being nice to the Congress, regardless of the fact that the TDP took birth on the foundations of anti-Congressism. But time has changed and very few people remember NTR and the circumstances that had forced him to form the TDP then.

Anyway, in modern political context, it is nothing wrong in joining hands with the Congress as politics, these days, is not about principles but is about how smart one is in knowing what moves one has to make to win the election. After all, what matters is winning and not how.