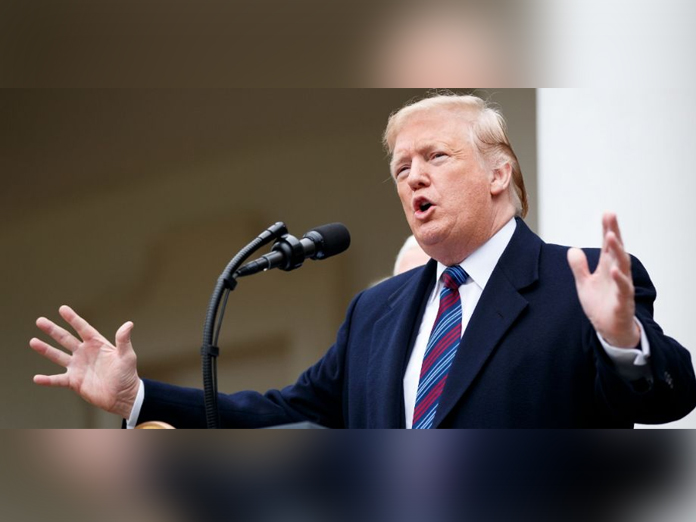 Washington: US President Donald Trump has said he will make a "major" announcement Saturday on the ongoing federal government shutdown and the humanitarian crisis on the country's southern border. No further detail about the announcement was immediately available from the White House.

The shutdown, the longest-ever in US history, is a result of the bitter political divide over border security issue between the Trump-led Republican party and the opposition Democratic party led by the House Speaker Nancy Pelosi.

The Democrats, who now enjoy majority in the House, have refused to approve a legislation approving USD 5.7 billion in federal funding to construct a wall across the US-Mexico border, a poll promise by the Republican president.

"I will be making a major announcement concerning the Humanitarian Crisis on our Southern Border, and the Shutdown, tomorrow afternoon at 3 P.M. (1:30 am Sunday IST), live from the @WhiteHouse," President Trump tweeted Friday.

Functioning of several key wings of the US government, including Security and State departments, has been paralysed for nearly four weeks now because of the ongoing partial government shutdown. President Trump insists that building a wall is the only solution to protect the nation from a large flow of illegal immigrants and drug smuggling.

The Democrats are opposed to any such funding. After Trump walked out of a meeting at the White House last week, Democrats have refused to come to the negotiation table. Pelosi and the Democratic party argue that such a funding is a wastage of tax payers payer and does not reflect the ethos of American culture.

The divide between the parties has led to some 800,000 federal government employees being rendered without work. The ongoing shutdown on January 12 broke the previous record of 21 days of US government shutdown under the Bill Clinton administration in December 16, 1995 to January 5, 1996.

Besides the border issue, the divide between Trump and Pelosi deepened after he denied her a military plane for an "excursion" to Brussels and war-torn Afghanistan, a tit-for-tat retaliation after the House Speaker asked the president to reschedule his annual State of the Union address slated for January 29.

Pelosi, who is third in line to the presidency, had made the suggestion citing security reasons triggered by the shutdown that has entered its 28th day. The House Speaker Friday accused Trump of endangering the lives of US nationals by revealing to the world about her secretive trip to Afghanistan.

She told reporters that "any time anyone with a bright light, of the presence of a high-level, or any level of Congressional Delegation in a region, you've heightened the danger. And this was a high power."

However, Trump had alleged that Pelosi and her Congressional delegation was headed on an "excursion" trip.

“Why would Nancy Pelosi leave the country with other Democrats on a seven-day excursion when 800,000 great people are not getting paid. Also, could somebody please explain to Nancy & her “big donors” in wine country that people working on farms (grapes) will have easy access in!” Trump tweeted.

The White House denied Pelosi's allegations, with as senior administration official saying, “When the speaker of the house and about 20 others from Capitol Hill decide to book their own commercial flights to Afghanistan, the world is going to find out.

The idea we would leak anything that would put the safety and security of any American at risk is a flat out lie.". Pelosi later told reporters that she has abandoned her trip to Afghanistan.