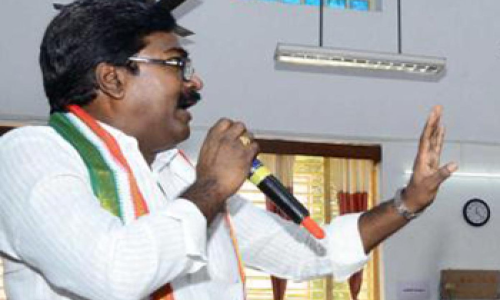 Choutappal (Nalgonda): There have been efforts to set up a garbage dumping yard in the Ghat Kanche lands at Dandu Malkapuram village in Choutappal...

Choutappal (Nalgonda): There have been efforts to set up a garbage dumping yard in the Ghat Kanche lands at Dandu Malkapuram village in Choutappal mandal which would deprive people of their land, said Bhuvanagiri MLA Uma Madhava Reddy here on Wednesday.

Addressing a meeting in connection with the 64th birth day of the late home minister Alimineti Madhava Reddy after garlanding the statue of her husband, Uma Madhava Reddy said that the late leader had distributed 3,000 acres at Ghat Kanche to the poor. She said that people never forget the leader who spent several crores of rupees to lay tar roads to the remote villages and villages were provided with concrete roads.

Expressing concern over the move by the State government to dump garbage from Hyderabad in the lands distributed to the poor in the village, she said that the poor would lose their land and the garbage might affect the health of the villagers. "Let us not allow using the land as dumping yard," she added.

The MLA said that the Defence department is trying to establish a missile testing centre at Rachkonda Gutta area near the village. "This would deprive the girijans of their land and livelihood," she said.

She said that she would raise the issue in the assembly in the session to stop these two proposals. She appealed to the opposition parties to join hands in the larger interest of people.A She said that she would hold discussions with the local MLAs and MP in this connection. A The MLA condemned the heinous attack on the district TDP president Bilya Naik on Tuesday. She warned of dire consequences if the Congress workers did not desist from such attacks.