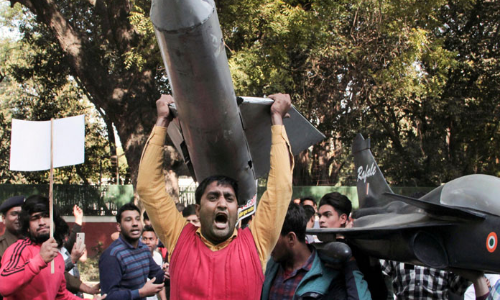 New Delhi: Congress president Rahul Gandhi on Thursday alleged Prime Minister Narendra Modi was responsible for delay in delivery of Rafale fighter jets as he was holding "direct negotiations" in the deal and asked why there was no investigation against him when the government was talking of probing others for theft of documents.

Repeating his allegation of a "Rs 30,000 crore scam" in the Rafale deal, Gandhi also accused the government of manipulating institutions to "save" Prime Minister Modi and said justice should be for all. Gandhi's attack came a day after the government told the Supreme Court that documents related to the Rafale deal have been stolen from the Defence Ministry. The government told the court that it was probing the theft and also warned of using the Official Secrets Act against media publications for publishing reports based on those documents.

Earlier in the day, Gandhi said "gayab ho gaya" (vanished) is the new tagline that has emerged in the Modi government as he referred to 'vanishing' of the Rafale documents and alleged other things that have 'vanished' include two crore jobs for youths, right prices for farmers' produce, Rs 15 lakh in everyone's bank accounts, farmers' insurance and promise of eradicating black money after demonetisation, etc.

Referring to the government investigation into theft of Rafale documents, Gandhi said everyone can be investigated but there must be a probe against Modi also as he alleged that the ministry files showed the prime minister was holding parallel negotiations in the fighter jet deal. "An interesting thing happened yesterday... The government said the media will be investigated, but there is no probe against those involved in the Rs 30,000-crore scam.

The government is protecting Narendra Modi, the 'chowkidaar' (watchman), at any cost," he said at a press conference."The prime minister delayed the Rafale deal... The parallel negotiations retarded the delivery of Rafale. The aircraft were delayed because you wanted to give Anil Ambani Rs 30,000 crore," he alleged.