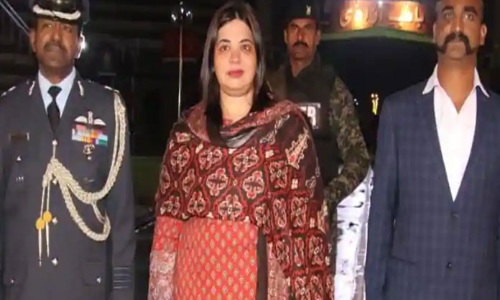 There is a sense of victory and jubilations in the air on Indian soil as well as in certain political flight path in the country as the nations...

There is a sense of victory and jubilations in the air on Indian soil as well as in certain political flight path in the country as the nation’s valiant soldier – IAF pilot Wing Commander Abhinandan Varthaman – returned to his motherland with his intriguing smile of a true-blue squaddie who showed the whole world the life-force of Indian armed forces.

While the Commander was tied, paraded blindfolded and made a butt of ridicule by the Pakistani locals and some of its soldiers, the bleeding hero was cool, calm and collected, showing the spirited stature of Indian military.

While the border was boiling and the whole nation was eagerly waiting for the wounded soldier’s triumphant return, Indian visual media has been overworking to grab the maximum eyeballs and to increase their TRP rates. Anchors were shrieking, panel members were showing their verbosity to the maximum and reporters were making all sorts of claims and counter claims.

It is true that in its efforts to emerge as the truthful watchdog, a congregation of journalists from the entire world generally gets animated while reporting any armed intervention or military conflict. Based on the situation in the field, the media is expected to analyse the steadiness of armed forces and report sensibly. It is a general notion that the armed forces and governments ensure that the general public know how a military operation unfolds.

However, while taking into account the entire episode of Wing Commander Abhinandan Varthaman, which does not require any introduction per se, a need is felt to evaluate the role played by both mainstream media and the social media. At this juncture, there arises a need that the media and armed forces must rub their shoulders — in order to produce revised criterions to standardise rules of reporting a conflict.

One of the unique features of Indian media is — there are innumerable news channels that work round-the-clock to get noticed in the world of cut-throat competition. If the news channels in the vernacular languages are also taken into account, the number of news channels in India are much higher than any other country. It is rightly said by Donald Rumsfeld that the battle does not take place only on the battlefield; it can only be won or lost in the court of public opinion.

It is important to understand how the information passed on by the mainstream media and the social media would benefit the other side of the battlefield. History gives the answer to the question, “What happens if the media does not bother the consequences of what they are reporting?” For example, the role of the media in the Vietnam War is a subject of on-going controversy — some accept that the media played a large role in the US defeat while others have a different perception.

Considering the recent episode of Wing Commander Abhinandan, it is evident that the mainstream media and the social media have sprinted together in passing the unwanted confidential information to the opponent, though unintentionally. While the ‘air warrior’ himself refused politely to inform the Pakistani authorities of the vital information that includes his basic personal info such as his native place, the Indian media disclosed his entire bio-data within no time.

It might have been the strategy of the Pakistan Military to extract information from other sources. TRPs and the popularity alone are not the criteria while reporting a conflict or allied issues — the nation’s interests are to be kept far ahead of the personal/organisational interests.

In some of the news analyses, they visually projected the locations of vital air bases along with such information as the number of aircraft and their types and capacity. All such information is very confidential in the best interests of national security. The enemy is ever ready to fabricate a cloth out of small pieces of rags. It should be very well understood by media agencies while undertaking such analyses.

Yes, it is true that the online citizen journalism is sometimes given too much credibility by other media networks fervent for a sensation. In the race of who informs first, without verifying the facts, some of the mainstream media rely on material that they cannot verify. It leads to great exertion, especially while reporting a conflict. On the other hand, the netizens hold government authorities and armed forces accountable for their engagements.

In such circumstances, the audience who are exposed to the media, for sure, would be in a Catch-22 situation. Because of the lack of exact information, nobody really knows what is happening. The best way to discern the truth is to interact with the responsible people hailing from the hot spots of the country.

But it may not be always possible as during emergency situations like an international conflict, the authorities cannot divulge details for the reasons best known for them.For this very reason, the mainstream media do not like the participation of citizen journalists. In the past, some journalists have raised concerns about the role of citizen journalists in reporting vital news.

However, as a rule, they cannot be controlled from reporting as their status in terms of international humanitarian law (IHL) is legitimately strong. They are safeguarded as civilians as long as they do not take part in conflicts — IHL differentiates between only two categories of people - civilians and combatants. It means irrespective of a journalist whether he publishes in mainstream media or social media, he is entitled to the protection granted by IHL.

Beyond doubt, propaganda has played an important part in the politics of the war. Social media has been used as the tool for propaganda as it has played a major role with global mainstream networks repeatedly rebroadcast video footages of various versions of the conflict posted by netizens.

Due to the changes in the nature of the conflict, the nature of war reporting has also changed. As far as war reporting is concerned, holding a pen is as daring as holding a gun. So, the media people should understand their responsibilities and appreciate that the line between activism and journalism is at times thin.