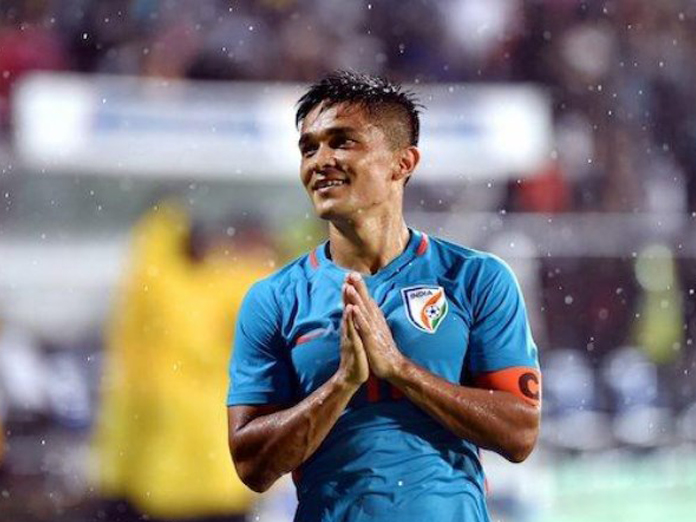 Indian football captain Sunil Chhetri, who scored an impressive 67 goals from 107 international appearances, was nominated for the award by Telangana

Indian football captain Sunil Chhetri, who scored an impressive 67 goals from 107 international appearances, was nominated for the award by Telangana.

Chhetri said, "I'm happy and I'm feeling encouraged and motivated. It's a huge honour and I cannot explain how it feels in words. I hope to keep working hard and be worthy of it (the award). There are many people who have worked very hard on my career and to see them happy is a great feeling."

Currently, 34-year-old Chhetri is busy with the ongoing season 5 of the Indian Super League (ISL) after the return of the Indian football team from the AFC Asian Cup. Many applaud poured in on social media after the announcement, admiring the footballer.

Last year, Chhetri hit the limelight after his appeal on Twitter resulted in thousands rushing to watch India's match against Kenya at the Intercontinental Cup 2018. India won the match and his tweet was later recognised as the most "retweeted tweet" of the year from India.

Chhetri's message in that video was, "Abuse us, criticize us but please come to watch the Indian national team play. To all of you, who have lost hope or don't have any hope in Indian football, we request you to come and watch us in the stadium."

Veteran women mountaineer Bachendri Pal received the Padma Bhushan award. The 64-year-old mountaineer was the first Indian woman to reach the summit of Mount Everest in 1984.

The Padma Shri is the fourth-highest civilian honour after the Bharat Ratna, Padma Vibhushan and Padma Bhushan.