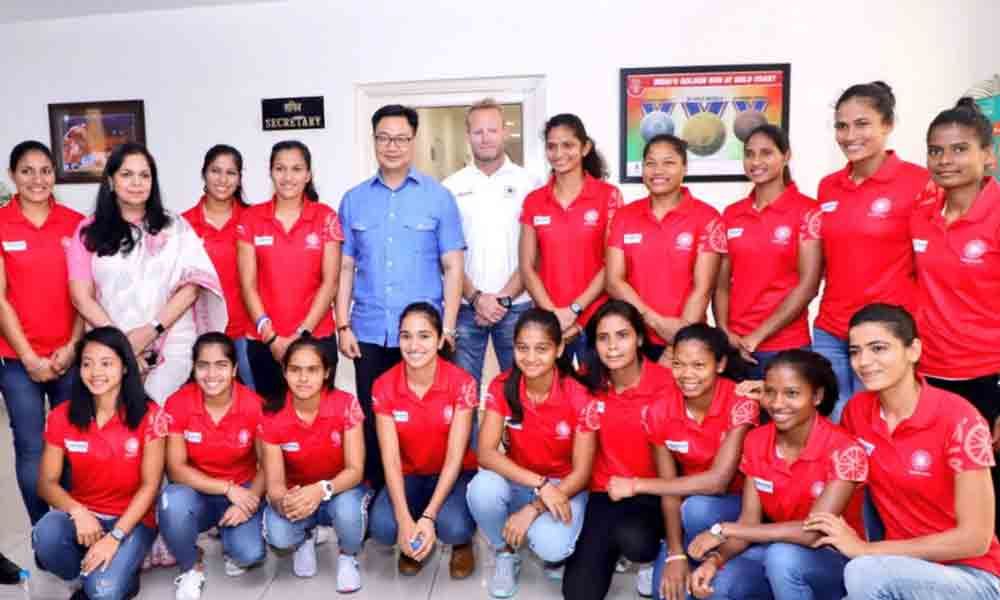 New Delhi (PTI): Newly appointed sports minister Kiren Rijiju on Tuesday interacted with the recently crowned women's hockey team members and assured that the government will provide all the support required for the Olympic qualification.

The Indian women's hockey team had outplayed hosts Japan 3-1 to clinch the FIH Women's Series Finals on Sunday. The world number nine Indian team will now compete at the the FIH Olympic Qualifiers to be held later this year. The 14-team tournament will be a bilateral two-match series, from where the winners of each of the seven matches will qualify for the Olympics.

"The Indian women's hockey team has played very well, and made us proud. The ministry will extend all support to players, both individually and as a team. I will visit their training center in Bengaluru to meet their coaches and discuss the requirements of the team. India has a good chance of qualifying for the Olympics and winning a medal in hockey," Rijiju said.

India remained unbeaten throughout their campaign, scoring 29 goals and conceding just four. The women's team recorded convincing victories over Chile, beating them 4-2 in the semifinal and Asian Games champions Japan 3-1 in the final.

Penalty corner specialist Gurjit Kaur was India's leading goal scorer at the tournament with 11 goals, while captain Rani Rampal added one more accolade to her growing profile, as she was adjudged the player of the tournament.

The Indian team has participated in Olympics on two previous occasions, in 1980, where they finished fourth, and in 2016. With their improving fortunes on the global stage, having reached the semifinals of the 2018 Commonwealth Games and earning a silver at the Asian Games, India will look to seal an Olympic berth later this year.