KTR seeks IT professionals' support for TRS in LS polls 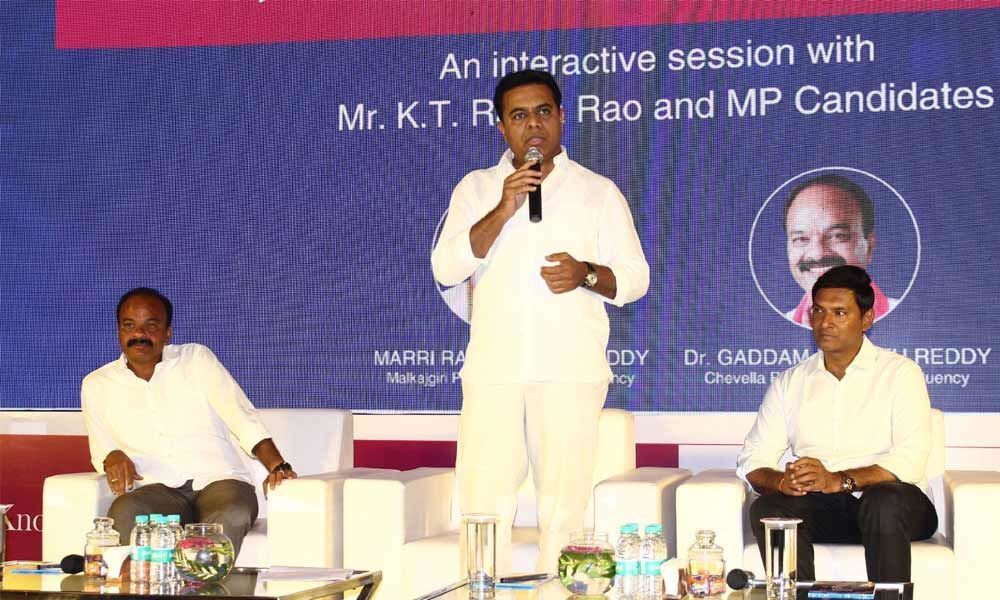 Telangana Rastra Samithi working president points out that five top IT companies like Facebook, Apple, Google, Microsoft and Amazon have established largest centres in Hyderabad outside the US

Hyderabad: TRS working president K T Rama Rao on Sunday pointed out that top five IT companies including Facebook, Apple, Google, Microsoft, and Amazon, have chosen Hyderabad to establish their largest centres outside the US.

The TRS working president participated in 'Know Your MP candidates in IT corridor' programme conducted at JRC Convention, Hyderabad.

He introduced TRS candidates for Malkajgiri and Chevella Lok Sabha constituencies M L R Rajasekhar Reddy and G Ranjit Reddy to the people. KTR said that "Hyderabad is consistently rated as the best city in terms of quality of living.

Talking about TRS MP candidates at the programme, KTR said, "Ranjit Reddy is a successful entrepreneur and M L R Rajasekhar Reddy an educationalist. They have unblemished track record and are extremely successful in their fields.

They will become great lawmakers." He appealed to the IT industry representatives to support and vote for the TRS candidates in the Lok Sabha election.

Talking about the development which took place in Hyderabad, KTR said Hyderabad is well connected to the rest of the world and has economic and political stability, which makes the city the favourite destination for global companies.

Talking about the expansion plans of metro rail in Hyderabad and its suburbs, KTR said, "I am delighted that the metro has reached Hitec City.

It has to reach the Mindspace junction next and then to the airport, which is already been approved by the government. We want to connect all the corridors of metro."

KTR stated that if TRS wins 16 MP seats in the coming elections, the people of Telangana State will have a strong voice in Delhi. "In Delhi, only those who have the numbers are taken seriously," he said.

He asserted that BJP will not get more than 150 seats and the Congress will get less than a 100.

KTR said that PM Modi took the bullet train project to his native State Gujarat and not to Telangana to drive his point home that the TRS, if it has a good number of MPs, can force the Centres to sanction more projects for the State.