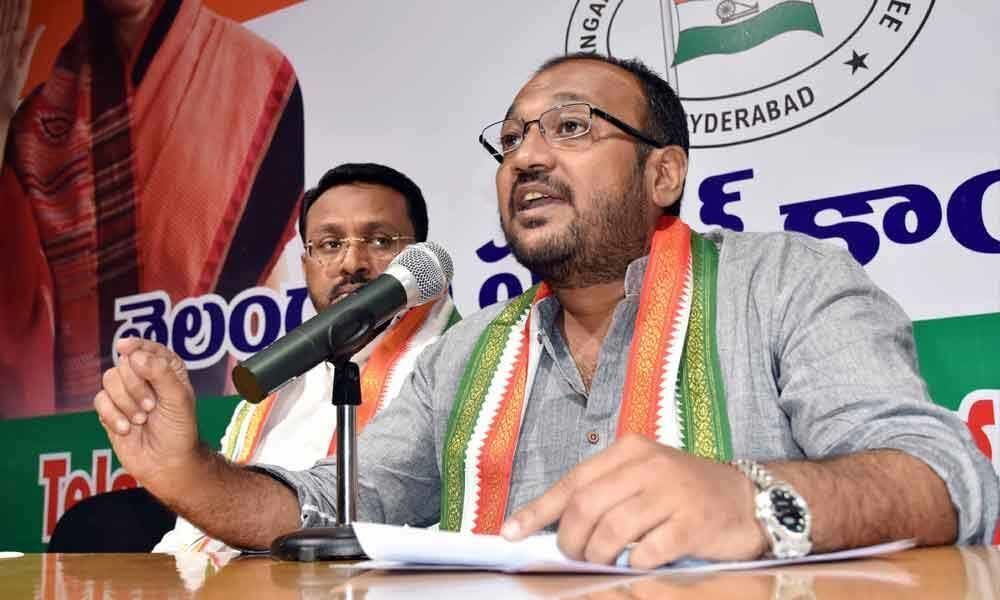 Sameer, in a media statement on Thursday, alleged that the TRS Government was deliberately delaying the implementation of schemes meant for eradication of unemployment among minority youth. He said the TRS Government has not spent a single rupee under any scheme since 2014 to give loans to jobless youth. He pointed out that of Rs. 573.1 crore released for the first quarter of financial year 2019-20, only Rs. 24.41 crore have been earmarked for bank-linked-subsidy scheme. If each youth is provided a loan of Rs. 1 lakh, then only 2,441 youth would benefit from it. "Over 1.53 lakh jobless youth of minority communities had applied for loan-cum-subsidy scheme in 2015-16. Nearly 8,000 applications were reportedly approved, but no one was given loan. Since then, the TRS Government stopped receiving any loan applications and no funds were released under this head despite allocations in annual budgets for the last five years," he said.

The Congress leader also ridiculed the contention of Director of Minorities Welfare Department Shahnawaz Qasim wherein he claimed that loans could not be disbursed under bank-linked schemes of the Minorities Finance Corporation due to election code of conduct. "This statement is completely misleading. TRS Government has not cleared the applications it got in 2015-16 and stopped receiving fresh applications since then. Therefore, how could the State Government blame Model Code of Conduct for non-implementation of an old scheme? When cheques could be distributed among farmers under Rythu Bandhu during elections, then why minority community youth were being shown the Model Code of Conduct which is under implementation only since March 2019?" he asked.

Sameer also pointed out that the official website of Telangana State Minorities Finance Corporation http://tsmfc.telangana.gov.in/ was dysfunctional. He said the official website was under 'Maintenance Mode' since several months. Therefore, the jobless minorities' youth are even unable to even apply for the loan under any scheme. "In previous term (2014-2018), the portfolio of Minorities' Welfare was held by Chief Minister K. Chandrashekhar Rao. Therefore, it is the Chief Minister who should be directly blamed for not releasing a single rupee loan to jobless minority youth. This time, Welfare Minister Koppula Eshwar is handling the task. He is emulating KCR in cheating the minorities with false statements through the Minorities Welfare Department," he said.

The Congress leader accused the TRS Government of cheating the minority communities in the name of T-Prime scheme which was proposed in 2017 on the lines of TS-Pride, a welfare scheme started for SC/ST entrepreneurs, to encourage entrepreneurship. He said Rs. 25 crore were allocated for this scheme to support 100 entrepreneurs in 2018-19, but funds were not released. This year, as against the provision of Rs. 25 crore, only 6.25 crore have been released in the first quarter which literally means that only 25 entrepreneurs could benefit from it, if it is implemented.

He said that the policy document, which the State Government claims to have prepared through a high level committee, has not been placed in public domain. "No one knows the guidelines and procedures for applying for loans under T-Prime scheme. The website of Minorities Finance Corporation is dysfunctional and there is no other gateway through which the industrialists and entrepreneurs belonging to the minority communities could at least submit their applications," he said.

Sameer reminded that the Chief Minister, while initiating a debate on minorities' welfare in the State Legislative Assembly on January 19, 2017, had announced setting up of an exclusive IT SEZ for the minority industrialists in Hyderabad. Even after two years, he said that the announcement remained on paper and no steps have been taken to fulfil the promise.

He warned that the Congress party would launch a massive agitation if the TRS Government continues to deprive jobless minority youth of loans and other promised facilities.