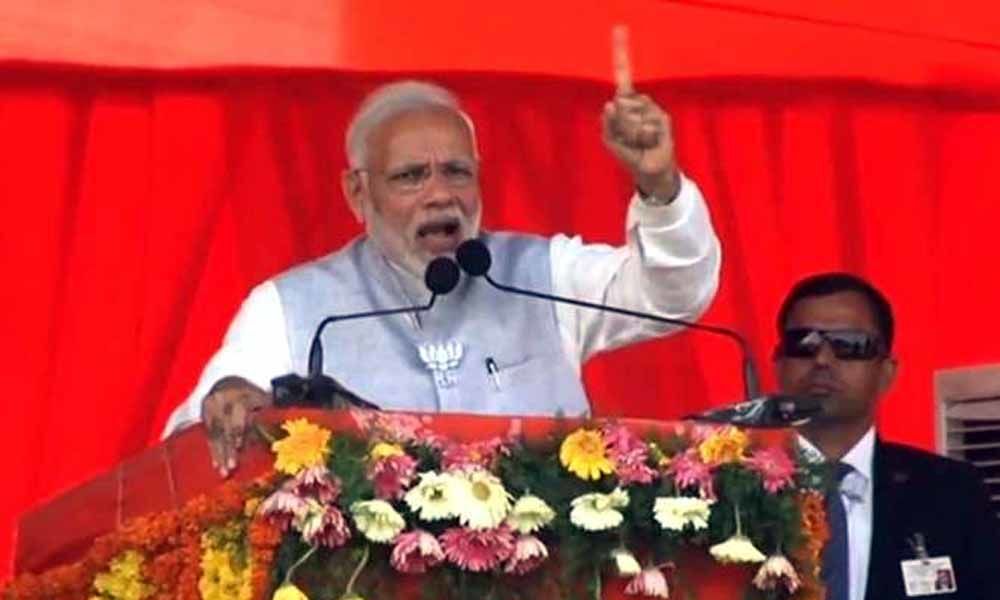 MAHBUBNAGAR: Asking the people of Telangana to vote for a "new Bharat" where the people of the state will also benefit, Prime Minister Narendra Modi Friday said the citizens in the country were moving forward sans any fear as the 'chowkidar' has been 'alert.'

Addressing a mammoth public rally here, Modi took a swipe at Chief Minister K Chandrasekar Rao for the delay in forming the cabinet after securing a massive win last year, saying the latter must have been influenced by some astrologer.

Rao is said to be a firm believer in rituals and astrology.

The Prime Minister described Rao as the "face" of dynastic and appeasement politics.

In his first rally here post the announcement of the Lok Sabha polls, Modi said despite abuses and attacks against him, he has steadfastly moved ahead with his development agenda due to the 'blessings' of the people.

"Your blessings allowed me to tolerate all kinds of pressures. That's why I could run a decision-making government," he said.

He assserted the NDA government during the last five has left no stone unturned to ensure women's safety and farmers' security, among other things.

The Prime Minister said he was working hard in areas ranging from civic amenities to space, an obvious reference to the country successfully experimenting 'Mission Shakti,' after an 'Anti-Sat' (A-Sat) missile had shot down a low earth orbit satellite, putting the country into an elite club.

"On April 11, you are not just going to select an MP or vote for a Prime Minister, but will be voting for a new India, which will be reflective of the aspirations of Telangana," Modi added.

Further, the country's security had improved as bomb blasts were now virtually "confined to only some parts of Kashmir," while there have been no terror attacks in other parts, he said.