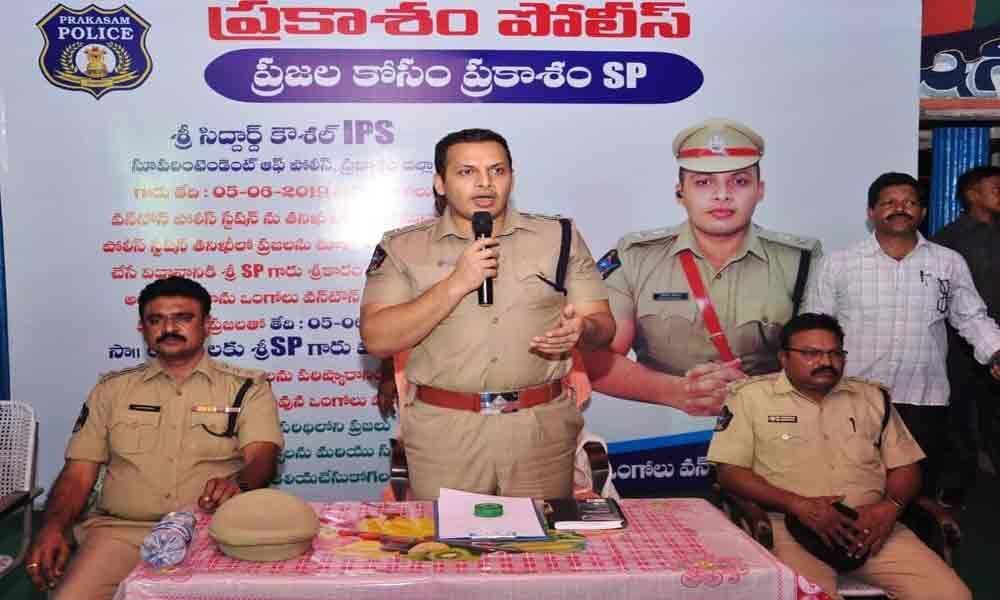 he Prakasam district has adopted community policing and made it their style of functioning to involve locals in control and prevention of crime.

Ongole: The Prakasam district has adopted community policing and made it their style of functioning to involve locals in control and prevention of crime. The district police are participating in various programmes in villages and interacting with the public for better understanding of the locals' problems and also to remove any mistrust associated with the conventional policing. Superintendent of Police Siddharth Kaushal, an MBA from IIM Indore and once a corporate team player, involved public and police participation to improve transparency in the department.

Last week, the police personnel in the district organised many activities and participated in a number of programmes. As part of the visible policing, the SP visited various places in the town and surrounding areas on the motorbike and interacted with the locals. With the issues observed, he is trying to find solutions to the increased traffic and security of denizens in the outskirts.

The police organised many traffic awareness meets and rallies in the district to promote the use of helmets at all times for the safety of the bikers. They even distributed few helmets with participation of philanthropic organisations working on road safety.

To create awareness on pickpockets and cybercrimes, the police explained commuters and bank customers with live examples and short films about the modus operandi of the offenders who resort to various types of attention-diverting techniques to get OTP or net banking details to escape with the valuables and money. They are also organising awareness programmes through songs and skit on social problems including child marriages, suicides and crime against women at remote places, girl's hostels and colleges.

Apart from the awareness programmes, the Prakasam police are encouraging youth to take part in sports by organising cricket, volleyball, tennis, shuttle badminton and other tournaments in the district. As part of the service-oriented programmes, they also distributed shoes to youth from underprivileged sections participating in army recruitment rally recently and presented cycles to poor students coming to schools from long distances along with the distribution of books and pens to the needy children.

The police are visiting the orphanages and old age homes to boost the morale of the children and elderly people and assuring them that they are there for their support. They also participated in blood camps and donated blood to help the needy patients and distributed buttermilk, badam milk and other beverages to comfort the public in the scorching heat.

Along with the regular police, the women police wing, the Shakti Team members visited various places in the district to interact with the women and explain the legal protection to them, about crimes against them.

The Prakasam police also introduced a 'Prajalakosam Prakasam SP' programme in the district. The SP participated in the programme at Ongole Town I police station after involving the locals in the police station inspection process.

In the face-to-face with the public, the SP received several requests, complaints and suggestions from them. In the open meeting, a number of people complained about the gambling, parking issues, need for traffic diversion in various places in the town.

The SP listened to their pleas peacefully and tried to make possible alternatives immediately. The SP said that the first session of the 'Prajalakosam Prakasam SP' has received tremendous response from the public and he is going to conduct similar programmes in all police stations in the district, by making a schedule.

In the counselling to the rowdy-sheeters, the SP announced that he has no problem with them as long as they do not disturb the peace in the district. He would not tolerate any of them, if they resort to antisocial activity and obstructed the law and order.