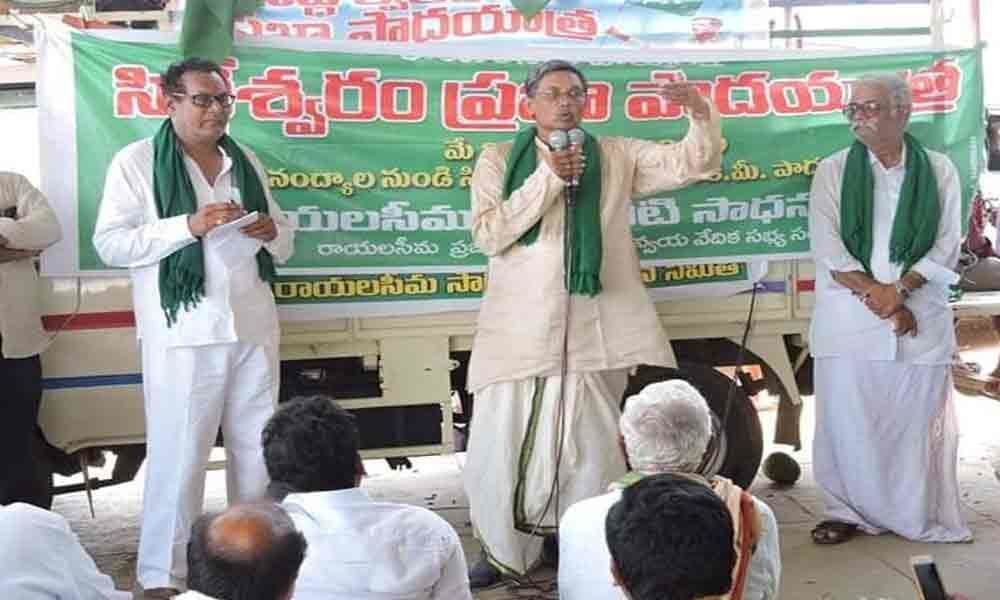 The president of Rayalaseema Saguneeti Sadhana Samithi B Dasaratharami Reddy came down heavily on both Congress and Telugu Desam governments for neglecting Rayalaseema region for the past 70 years.

Kurnool: The president of Rayalaseema Saguneeti Sadhana Samithi B Dasaratharami Reddy came down heavily on both Congress and Telugu Desam governments for neglecting Rayalaseema region for the past 70 years. He addressed a meeting which was arranged to mark the conclusion of four-day "Siddeswaram Pada Yatra" on Friday.

Farmers, poets, writers, doctors, lawyers, and activists have attended the meeting extending solidarity for the construction of Siddeswaram low head dam project.At the meeting, Reddy said 30-years of Congress' rule and 25-years of TDP's rule have not improved the living conditions of the people of Rayalaseema. "Farmers still do not have water, youth do not have jobs, and there is severe dearth of irrigation projects," he said.

Amidst slogans of 'Jai Rayalaseema', he said that Rayalaseema requires a High court, a Steel plant in Kadapa, an All India Institute of Medical Sciences (AIIMS) in Anantapur, and a Seed Park in Kurnool along with the irrigation projects. Dasaratharami Reddy stated that irrigation projects are more important than special category status for the state, and urged the new government to complete pending irrigation projects, including Siddeswaram project.

He further said that the project, after its construction, will have potential to increase tourism to the state, as Sangameswaram, the confluence of seven rivers, was about one km in the downstream from Siddeswaram. He then said that the projects will have the potential to store about 100 tmc ft of water which is currently going waste into the sea.

Later the Samithi members and others have released a book named, 'Rayalaseemanu ila sasyasamalam cheddam', written by a retired irrigation engineer Subba Rayudu. The book gives details about the required irrigation projects to be constructed in Kurnool district, so that the entire Rayalaseema would get enough water for irrigation.