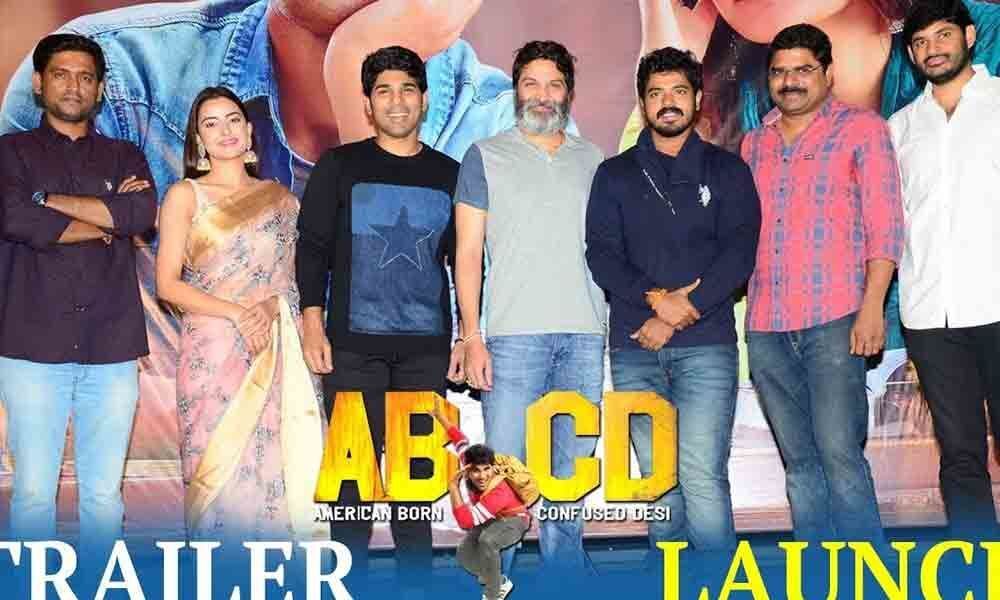 The film ‘ABCD’ with the tagline ‘American born confused deshi’ is being bankrolled jointly by Big B Cinemas and Madhura Entertainments.

The film 'ABCD' with the tagline 'American born confused deshi' is being bankrolled jointly by Big B Cinemas and Madhura Entertainments. Presented by producer D Suresh Babu with Sanjiva Reddy making his debut as director, the film has Allu Sirish and Rukshar Dhillon as the lead pair.

The theatrical trailer of 'ABCD' has been released at the Prasads Labs in the city on Monday. Speaking on the occasion, Trivikram Srinivas, who was the chief guest, said that Allu Sirish, whom he knew as a small boy from the days of making the film 'Jalsa', was a highly intelligent person who has a firm understanding of film making and acting. There are very few people like Sirish who loves filmmaking, he added.

Trivikram said that the trailer, which was released, was excellent. He said that he was a big fan of Bharat and saw his films like 'Venky' and 'Ready'. He expressed the hope that the film would turn out to be a huge hit and conveyed his wishes to the entire film unit.

In his speech, Allu Sirish said that he would talk more about the film during its pre-release event and thanked producer Madhura Sridhar and Suresh Babu for giving him an opportunity to act in the film.

Madhura Sridhar Reddy said after producing serious films, he wanted to try out on a fun-centric film for the first time. Since the comedy based 'F2' turned out to be a hit, 'ABCD', which would be released on May 17 would also be huge hit, he added.

Director Sanjiva Reddy, Bharat and Rukshar Dhillon were present on the occasion.