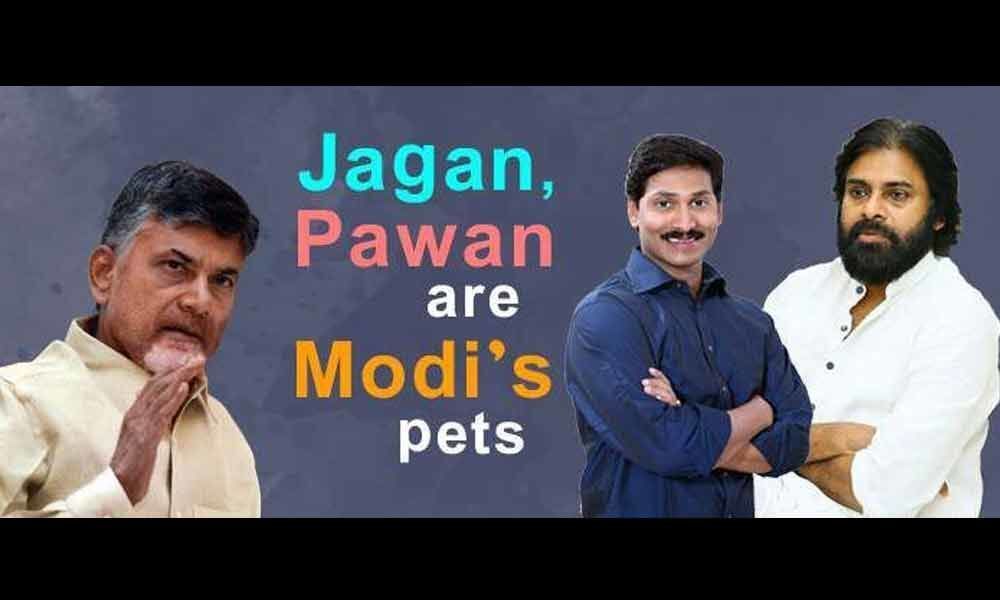 Cut-and-paste politics of AP What really makes a candidate click? While at one place a candidate may register a simple and easy win using his person...

What really makes a candidate click? While at one place a candidate may register a simple and easy win using his personal charm and charisma, another candidate with the same impressive traits at another place may lose the deposit.

Many times it happens when a politician, after doing lots of service to his people seeks a mandate for another term,faces humiliating defeat. It had happened in the case of late Rama Naidu. Again legions of people may attend the election meetings of a leader, yet he may taste bitter experience at the hustings.

Going by the number of people attending his public meetings, many of us took actor Chiranjeevi for a promising and powerful people's leader. But at the end of the day, it turned out to be a big let-down. These surprise elements and imponderables make the job of a psephologist a daunting proposition.

While the scene is more or less the same everywhere, one could notice a couple of noval and interesting elements permeating the election scenario in Andhra Pradesh. Two new political parties have sprung up and caught the attention and imagination of the people.

One party floated by actor Pavan Kalyan and the other by international evangelist K A Paul have poised to dominate the elections and perhaps to tilt the fortunes of other parties.

Both Pavan and Paul have already made big ripples in their respective fields and both of them also appear to be very serious to win the elections.But there are many questions in the minds of the people about the rise and appearance of these two leaders on the political horizon.

Have they come into politics on their own? Or on the say-so of somebody? Who have masterminded their entry? And for whose benefit or downfall?

Personally I can say right now that neither of the two new faces can form the new government with the mandatory simple majority. Perhaps they may also know it, given their political clout.

Secondly, both of them definitely influence voting pattern in some pockets of the state,thereby improving or scuttling the winning chances of the candidates there. Pavan may influence the voters of his community as they bear a grudge against the TDP government for not completely fulfilling their demands.

Again K A Paul may also divide Christian votes across the state, causing some hiccups to Jagan,if not to Babu. It is whispered that the powers in New Delhi have steered Pavan on to the political scene to trouble Babu.

There are of course people who dismiss this idea saying that it is a clever move by Babu himself to float new parties this time for his advantage. These parties started by persons who really matter cut into the vote banks of opponents and later they join hands with the 'Master'.

These parties can be called "Cut and Paste" parties and this is a novel idea and soon it may be picked up by some other leaders.

Right now it can be said that in the post-election scene, Pavan Kalyan, if not K A Paul is going to 'play a big role' in the State and may even join the new government along with one of his brothers. Guess who.

Voters are left with none worthy

While briefly analysing the state politics, let us not waste our time discussing about the valueless 'Aya rams and Gaya rams', let us honestly conduct scrutiny of the contesting parties and its leaders antecedents.

Start with the party in power TDP and its leader .though it is a much discussed subject, it's just a recap, Chandrababu Naidu is in frustrated state, he is waging a one- sided war with tall leader Modi, even for any petty incident that takes place in state, it is attributed to Modi as if Modi has no other job to perform except indulge in silly street politics with him, his negative campaigning against Modiji take him nowhere.

who do not know that he is in master in the art of 'topsy- turvy' and an acknowledged instant liar and earned name as a great event manager .

His highly ambitious Amaravati capital construction is yet to commenced except laying connectivity roads to Amaravati .

He is reluctant to submit the expenditure accounts to the huge amounts given by Centre for the construction of Polavaram dam .The only positive aspect left is that he has brutal length of seniority as politician.

Number two -The leader of YSRCP.Jaganmohan Reddy, why should anybody cast vote to his party? First and foremost he utterly failed to discharge his fundamental duty of working as opposition leader in the assembly .

Instead of representing the grievances of people of state, he engaged in walkathon promising everything under the sky to all the sections of people, even fulfilling 10 per cent of his lofty promises is impossible with the available state budget .

His back is loaded with umpteen number of economic offences left at various stages in the courts of law ,once the centre tighten bolts, he may end up in prison ,the long pending cases have been deliberately kept in abeyance by the centre.

He is known as an arrogant person coupled with the background of faction politics devoid of experience in administration except pouncing on anybody with no- holds- barred attack.

I am afraid what would be the fate of the state if by chance he comes to power. What is destined by Almighty may happen.

Thirdly Janasena party being headed by Pawan Kalyan. Knowing his limits he is courageously fighting the state elections, he is committed to do something good to the people of state, though he is in- experienced, at least he has genuine zeal to prove himself as a sincere politician, he alone sacrificed the highly paid cine career and jumped in to electoral battle.

It is better if he is encouraged by electing his party in at least in 25 Assembly segments, he can be a king maker and it gives him a chance to check both the bigger contesting parties flush with funds.

It's all in the discretionary power of voters. Fourthly the aged and senile congress party ,it is already dead ,whatever little hope it has is being snuffed by the young , irresponsible, impulsive and immature leader Rahul who is otherwise earned name as self -goal specialist, his direct confrontation on Narendra Modi is very nauseating, the crude language he is using in the process is hated by all.

People literally are hating his negative politics. In Andhra state we have to perform last rites to Congress after the announcement of 2019 election results.

Lastly BJP, nationally strong party certain to form government at the centre under the leadership of dynamic nationalist Narendra Modi sadly playing evil politics in Andhra ,its hide and seek with the YSRC party and its leader for a few parliament seats is below the dignity of the national party, the party hobnobbing with the proven economic offender Jagan Reddy is disgusting ,although it has no presence in the state, it is trying to enter in to fray by backdoor.

Now all Andhra voters are in a big dilemma, for whom or which party they should vote? we are at the cross roads. Whether the people's vote justifies or crucifies gullible majority voters of Andhra will be decided in a couple of months' time.