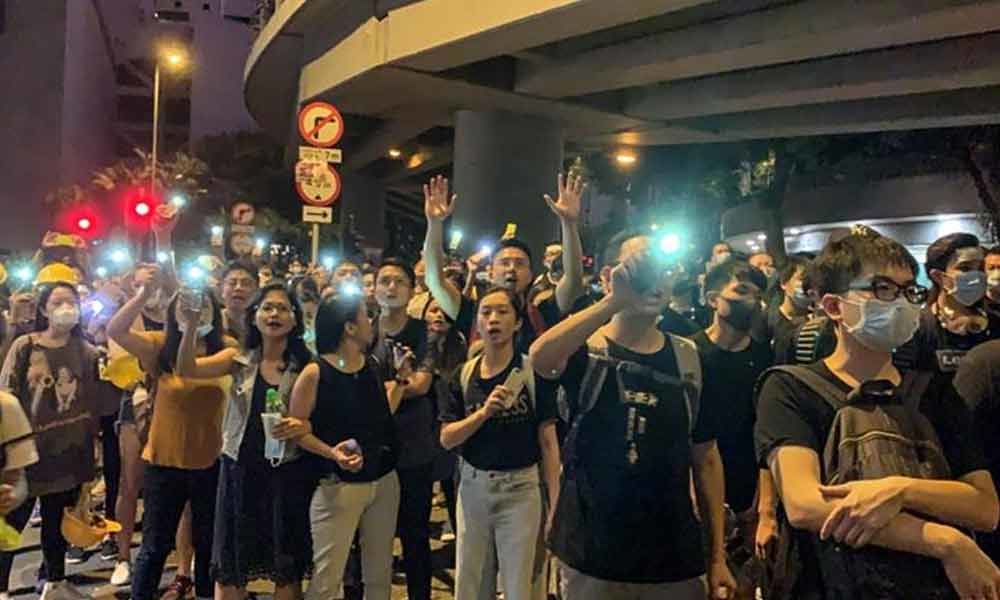 People in Hong Kong are increasingly fearful of Beijing's tightening grip over the city and what they see as an erosion of civil liberties.

Hong Kong: Thousands of protestors here in the wee hours of Saturday morning ended their 15-hour siege of the city's police headquarters after putting up demonstrations demanding complete withdrawal of the controversial extradition bill and exoneration of protestors arrested during previous clashes.

The hours-long demonstrations at the Arsenal Street police base in Wan Chai was over at 2.40 a.m. (local time) after protestors, mostly youths, blocked all entrances to the headquarters and pelted eggs, South China Morning Post reported.

Friday's gathering, which did not obtain official protest permits, largely turned its anger on the police, who have been accused of using undue force in clashes with protesters just over a week ago.

It must also be noted that a deadline given by Hong Kong Federation of Students to the city's Chief Executive Carrie Lam Cheng Yuet-ngor and her administration to respond over the extradition bill passed on Friday without any sign from her.

The extradition bill was proposed on April 3. Those opposing the bill argue that its controversial amendments will leave anyone on Hong Kong soil vulnerable to being grabbed by the Chinese authorities for political reasons or inadvertent business offences.

They further reason that the newly framed extradition plan would dissolve the rights and legal protections, which were guaranteed under the city's handover from British colonial rule to Chinese sovereignty in 1997.

The extent of the opposition to the bill is such that even business groups in Hong Kong, who generally take a neutral stance on political issues, have also spoken out against it.

Owing to the continued protests this last week, the city government on Saturday made a stunning reversal, when it halted the controversial amendments in the bill from becoming a law, only days after continuing to push ahead with it. Albeit, the protests continue, as the demonstrators are demanding nothing less than the permanent scrapping of this controversial bill.

Although Hong Kong is an autonomous territory, there is close cooperation between its police and their mainland counterparts, who have among the most advanced and intrusive surveillance systems.

In the latest, many people in Hong Kong are increasingly fearful of Beijing's tightening grip over the city and what they see as an erosion of civil liberties.