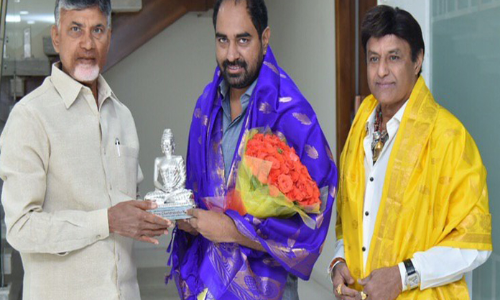 Naidu, who watched the film specially screened for him in Vijayawada on Thursday night, said that the entire 30 years life of NTR was shown in a very remarkable manner in three hours of biopic.

He congratulated the crew, including Balakrishna and Krish, at his residence in Undavalli on Friday. “NTR went to Madras after quitting his job and faced numerous problems. But he did not lose his confidence. He continued his journey with great self-confidence and courage. Finally, he succeeded in his goals,” Naidu observed while interacting with Balakrishna and others.

He said NTR experienced the devastations caused by cyclones and he himself suffered during the cyclonic storms and noted that he was aware of the problems of farmers, the poor and the marginal sections of the people in the society in his early age.

Because of that bitter experiences, NTR donated money to the people and even collected donations for them on the streets during natural disasters, he added.

Naidu said NTR became a role model for film actors, governments and social activists during his entire life. “He showed how one should be responsive to people’s needs when cyclones and other disasters happen,” he noted.

The Chief Minister said NTR who studied in the light of kerosene lamp targeted complete electrification of villages so that no student suffered like him. He introduced many reforms in education system and welfare schemes for the student community during his stint as Chief Minister, he noted.

“He was aware of the problems of poor people who were living in the huts and for them he undertook construction of houses with cement slabs,” Naidu said. Lauding Balakrishna for delivering an astonishing performance as NTR, he said co-stars and other crew members also put in an excellent efforts in the making of the biopic.