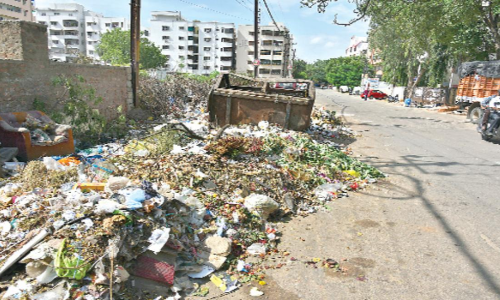 Residents of Dharam Karan road on Tuesday accused GHMC officials of acting in an irresponsible manner by failing to clean heaps of garbage accumulated on this busy stretch for over 96 hours.

​Hyderabad: Residents of Dharam Karan road on Tuesday accused GHMC officials of acting in an irresponsible manner by failing to clean heaps of garbage accumulated on this busy stretch for over 96 hours.

As the garbage is randomly thrown outside the bin, stray animals have been biting open the garbage bags, exposing residents and passersby to unbearable stench.

Students of Govt Boys Elementary School, which is located opposite to the garbage bin, have been suffering in silence due to the indifferent attitude of the GHMC authorities. School headmaster M Sudhakar said he had written to the authorities six months ago to relocate the garbage bin, but no initiative has been taken till date.

Dharam Karan road is a bypass connecting Sanathnagar, the industrial area of the city, to some of the most prime areas like Sanjeevareddynagar, Punjagutta, etc. Most of the office-goers working in industries of Jeedimetla travel through these lanes from various parts of the city.

One of the commuters, V Venkatesh, said that the garbage accumulation here is always on the higher side because of GHMC’s failure to lift garbage daily.

Assistant Medical officer of Health (AMOH) of 10A circle in GHMC, N Venkata Ramana said, “We will clean the area of all garbage even it means making two more additional trips. People should also be aware of the consequences of throwing garbage outside the bin.”

Due to the careless nature of the officials in cleaning the garbage has become a serious problem to the whole colony. The garbage bin cannot contain the garbage as the bin is filled with garbage and fresh garbage is usually dumped outside the bin.