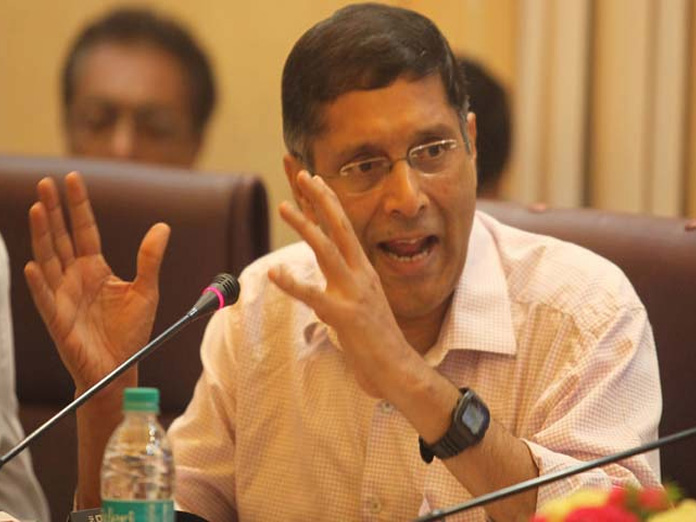 Former Chief Economic Adviser Arvind Subramanian has proposed a quasiuniversal basic rural income QUBRI of Rs 18,000 per year to each rural household, except those which are demonstrably welloff, at an estimated cost of Rs 264 lakh crore to tackle agrarian distress

​New Delhi: Former Chief Economic Adviser Arvind Subramanian has proposed a quasi-universal basic rural income (QUBRI) of Rs 18,000 per year to each rural household, except those which are "demonstrably well-off", at an estimated cost of Rs. 2.64 lakh crore to tackle agrarian distress.

A per-household annual transfer of about Rs 18,000, or Rs 1,500 per month, encompassing 75 per cent of the rural population, can be covered at a total fiscal cost of about 1.3 per cent of the GDP, or Rs 2.64 lakh crore (at 2019-20 prices), he says in a paper that he co-authored with Director of JH Consulting Josh Felman, World Bank Economist Boban Paul and Harvard University's PhD student M.R. Sharan. The paper titled "Quasi-Universal Basic Rural Income (QUBRI): The Way Forward" suggests that the burden should be shared between the Central and state governments in equal measure. The proposal comes days ahead of the interim Budget in which an announcement of Direct Benefit Transfer (DBT)scheme for farmers is widely anticipated.

It says the opportunity created by agrarian stress can be leveraged to build the pillars of a new economic India in which inclusion, facilitated via some variant of a quasi-universal basic income, is centre-stage.
Targeting an inflation-adjusted basic rural income of Rs 18,000 per household, Subramanian and his co-authors suggest that the Centre should offer to finance one-third of it or Rs 6,000 upfront and without conditions, while the rest Rs 3,000 should be financed in the form of untying existing grants given to finance Centrally-sponsored schemes. However, they warn that the scheme should not be financed from RBI resources or by the states or the Centre breaching their existing fiscal commitments.

They say that the Centre's Rs 6,000 per household contribution would entail an expenditure of Rs 84,000 crore. which could be raised by eliminating or phasing out "demanding, duplicative, and dysfunctional" agricultural schemes like interest rate subsidy for crop loans (Rs 15,000 crore), Fasal Bima Yojana (Rs 11,000 crore), additional MSP or price deficiency scheme (Rs 10,000 crore) and fertiliser subsidy (Rs 70,000 crore). However, they add that the fertiliser subsidy should be phased out gradually over three years. The paper says that the Centre's additional Rs 3,000 contribution could be met by the Centre and states pruning about 15 per cent of the overall Centrally-sponsored schemes budget.

"The states would then have to find the additional resources to top up the Center's QUBRI of Rs 6,000 (plus Rs 3,000). If QUBRI is politically attractive, states should be able to find the means and political will to do so. They will have to cut subsidies (power and water) and other wasteful schemes. "Competitive federalism pressures will exert itself on the lagging states to find the means to match the efforts of states that do more," it adds.

Building on the Telangana government's Rythu Bandhu and the Odisha government's Kalia schemes, the authors suggest a direct cash transfer only to rural households, excluding the demonstrably well-off.
Critiquing the Rythu Bandhu scheme, it says it suffers from deficiencies like linking cash payments to land ownership and leaving out two highly-vulnerable groups - agricultural workers and landless labourers - while helping the richest and least vulnerable.

"Finally, even in terms of the beneficiary group - landed agriculturists - the scheme is regressive because cash payments are linked to the size of landholdings, so that richer landlords receive larger payments," it adds.