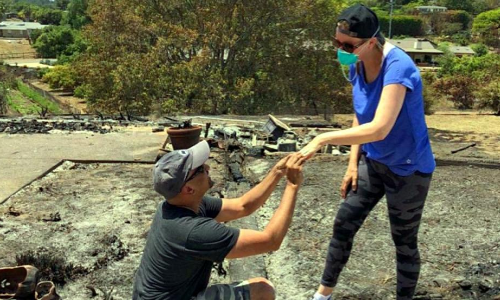 California firefighters battling several wildfires that have destroyed dozens of structures and forced thousands of residents to evacuate will get some relief as temperatures cool from scorching levels later this week, the National Weather Service NWS said

California firefighters battling several wildfires that have destroyed dozens of structures and forced thousands of residents to evacuate will get some relief as temperatures cool from scorching levels later this week, the National Weather Service (NWS) said.

"Starting Monday we're going to see a gradual cool down, as we shave just a few degrees off each day until about midweek it gets to something like normal, in the mid-90s (Fahrenheit) inland and 80s at the coast," said Jim Hayes of the NWS Weather Prediction Center in College Park, Maryland.

Dozens of blazes have broken out across the western United States, fanned by scorching heat, winds and low humidity in a particularly intense fire season.

This year's fires had burned more than 2.9 million acres (1.17 million hectares) through Friday, already more than the annual average of about 2.4 million acres (971,000 hectares)over the past 10 years, according to the National Interagency Fire Center.

The remains of an unidentified person were found on Friday near a home burned to the ground by the Klamathon Fire, which broke out on Thursday near California's border with Oregon. It marked the first fatality of the fire season in California.

A firefighter was injured battling the blaze but has since been released from the hospital, authorities said at a news conference on Sunday night.

The Klamathon Fire, which has destroyed 81 structures and blackened about 35,000 acres (14,160 hectares), was 25 percent contained on Sunday evening, according to Cal Fire. More than 1,500 people have been affected by the flames.

Authorities said steep terrain and erratic winds have made it difficult for firefighters to fight the Klamathon Fire.

Elsewhere in Northern California, the County Fire has charred more than 90,200 acres (36,500 hectares) in sparsely populated wooded areas of Napa and Yolo Counties.

Some 2,800 firefighters faced with inaccessible terrain, high temperatures and low humidity, were battling the fire, which was 65 percent contained.

In Colorado, officials said fire crews had made "much progress" battling the Spring Creek Fire, which broke out on June 27 and has consumed 106,985 acres (43,295 hectares). It was 43 percent contained on Saturday, the officials said.