Being a Muslim woman in Myanmar 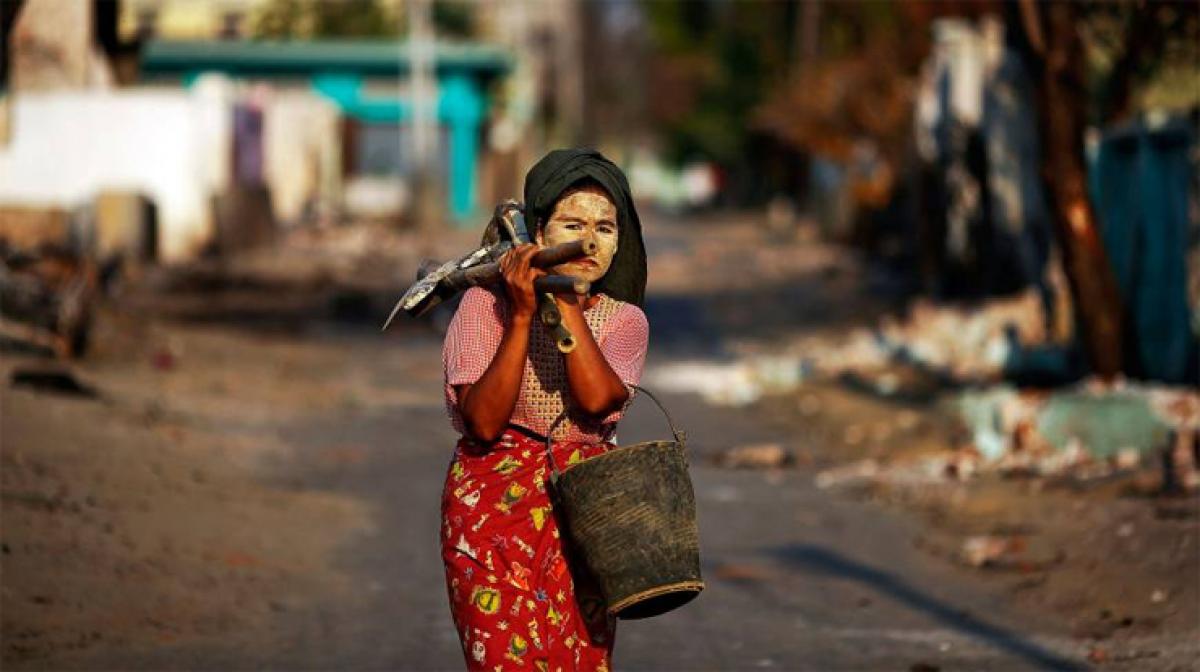 While the world has mostly focused on the Shia – Sunni conflict or the violent assault of radical terrorism in the Middle East, the Rohingya Muslims have been subjected to ruthless massacre for years. Some nationalist Buddhist terrorists that set the villages, homes and mosques of Muslims on fire and viciously slaughtered their women and children are perpetrating the most relentless bloodshed.

While the world has mostly focused on the Shia – Sunni conflict or the violent assault of radical terrorism in the Middle East, the Rohingya Muslims have been subjected to ruthless massacre for years. Some nationalist Buddhist terrorists that set the villages, homes and mosques of Muslims on fire and viciously slaughtered their women and children are perpetrating the most relentless bloodshed. The ones mainly affected in this agonizing fight and persecution are children and women. The women are in despair trying to persist in living in shoddy barracks in desolate circumstances, not knowing how to feed their children, or where to have them treated when sick. In the meantime, they are trying to find a way out to prevent themselves or daughters from being raped and turned into slaves.
Yet, if they resort to legal methods for claiming their rights, they are lynched. It is a well-known fact that scores of young women jump off cliffs or into the sea to commit suicide.
However, the world is in ignorance of the screams coming out of this land and turns a blind eye to this obvious persecution. In the face of such disregard worldwide, the lives of Muslims are counted as worthless every day.
Entire Islamic institutions and mosques are closed, and religious observances like going on pilgrimage, sacrificing animals for God, holding prayers as a community and other ways of worship are all prohibited. Unlawful arrests done in violation of human rights and the implementation of torture – made evident by international organizations – is the daily conduct of the Myanmar administration.
In brief, the religious freedom and rights of the Rohingya Muslims have been taken away from them in every respect and they are disallowed from observing their religious rights.
In the attacks targeting Muslims living in Arakan state in Myanmar since 2012, a total of 200 people have been killed, and 140,000 remain homeless. Tens of thousands of Muslims even take the risk of drowning in makeshift boats to seek shelter in neighboring countries like Thailand, Malaysia and Australia as a last resort. What is more, they pay large sum amounts to human traffickers for this venture putting their lives at stake.
Bangladesh is one of the countries where Muslims from Arakan head towards for the most part. It is actually amongst the poorest nations in the world; nevertheless, there are about 500,000 Rohingya refugees in Bangladesh where they try to stay alive under trying circumstances in camps, living through severe problems meeting the most essential humanitarian needs like infrastructure, hygiene, health, education, accommodation, sanitary water, nutrition and clothing.
Despite all these difficulties, the Muslims of Arakan still seek shelter in Bangladesh, though the country does not admit them.
Just for a moment put yourself in the position of these people. In the land you know as your own country, you are subjected to all kinds of persecution, you cannot find the means to feed or clothe your infant, or protect the chastity of your children and wife; what is more, you witness their humiliation and death. By all means, this is one of the most grievous experiences one could be faced with in his lifetime.
Even the slightest example of a similar turn of events, which the world turns a blind eye to in Arakan, causes a profound effect when they occur in Western countries. Obviously, reacting to assaults, carrying out self-defense measures and assessing such attacks as crimes against humanity is definitely normal.
However, when the same people do not protest the persecution of Rohingya Muslims with the most inhumane violence and keep silent about this aggression, then that is dishonorable on their part.
It is apparent that this innocent and most valuable community, distant to their own lives and not considered to be modern – or even second-class based on their ethnic origins – are not taken notice of at all. Yet, the approach to people who are under oppression should be the same the world over and humanity should unite in the need to end this crime against humanity.
No doubt, the United Nations has a great responsibility at this point. The UN should definitely take the necessary measures to assure ” the right to life, liberty and security” in Myanmar as stated in its universal declaration of human rights.
Inspections should be carried out to eliminate those crimes against humanity such as rape, torture, unlawful arrest, physical injury and murder; and the deported residents should be allowed to come back to their own villages and dwell there in safety and security; the ones who have committed these illegal acts must be put on trial in the court of human rights, and necessary steps should be taken to entitle the Rohingya community with their right to citizenship. And the international media should seek methods to lead the public opinion to act in good conscience by presenting the facts regarding the ongoing persecution in Myanmar.
The Muslims in the state of Rakhine should also be provided with all the rights made eligible for the public like services for education, health, medication and medical care, as well as human rights as a whole.
The Myanmar government, which is in the center of all oppression and violence in the country, should follow a system based on love, as the spirit of affection and brotherhood also exists in the essence of Buddhism. That is why the government should incorporate policies of love and speed up its transition to democracy.
By means of this new political approach, Myanmar’s image in the international arena will improve and the country will be open to greater foreign investments. In this way the country will prosper and the living standards of the entire people of Myanmar will progress.
The Rohingya community is the people of Myanmar; for that reason the government should stop tormenting its own people. It is an obligation of the state to watch over innocent people, in other words its own citizens, who are under persecution, regardless of their race or religion and approach them with love and brotherliness.
The writer has authored more than 300 books translated in 73 languages on politics, religion and science. He may be followed at @Harun_Yahya and www.harunyahya.com
By Harun Yahya
Show Full Article
Email ArticlePrint Article
More On