British Prime Minister Theresa May said on Monday that she would try to break the deadlock over her Brexit deal by seeking further concessions from...

London: British Prime Minister Theresa May said on Monday that she would try to break the deadlock over her Brexit deal by seeking further concessions from the European Union on a backup plan to avoid a hard border in Ireland.

With just over two months until the United Kingdom is due to leave the European Union on March 29, there is no agreement in London on how and even whether it should leave the world’s biggest trading bloc.

After her Brexit divorce deal was rejected by 432 lawmakers last Tuesday, May has been searching for a way to get a deal through parliament.

May said she could not take a no-deal Brexit off the table as there was not yet an alternative, and the EU would not be unlikely to extend Article 50 without a plan to secure parliament’s approval.

“So when people say ‘Rule out no-deal’, the consequences of what they are actually saying are that, if we in parliament can’t approve a deal, we should revoke Article 50. I believe this would go against the referendum result,” May said.

She said another referendum would strengthen the hand of those seeking to break up the United Kingdom and could damage social cohesion by undermining faith in democracy. May vowed to be “more flexible” with lawmakers in trying to agree changes to the Northern Irish backstop, an insurance policy to ensure there will be no return to border checks between the British province and Ireland. 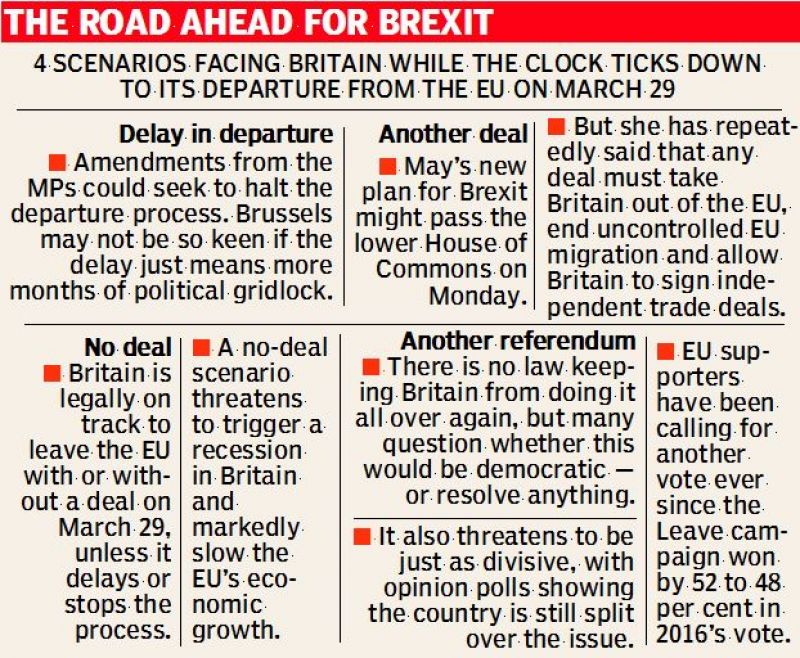 “I will then take the conclusions of those discussions back to the EU,” May said. “My focus continues to be on what is needed to secure the support of this House in favour of a Brexit deal with the EU.”

The EU, which has an economy more than six times the size of the United Kingdom, says it wants an orderly exit, but senior officials have expressed frustration and sorrow at London’s deepening crisis over Brexit.

German Europe Minister Michael Roth said on Monday that even William Shakespeare would not have been able to think up a Brexit tragedy of such drama.

Amid fears that the world’s fifth largest economy could drop out of the EU without a deal, some lawmakers are planning to wrest control of Britain’s exit.