Indian Railways is focusing on infrastructure development: Rly Board Chief 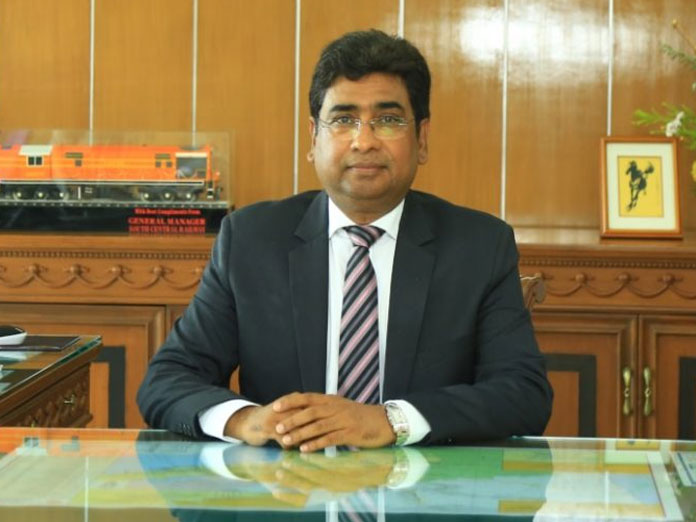 During his visit, the Railway Board Chairman also held a meeting with SCR General Manager R.K. Kulshrestha, Principal Heads of the Departments and Divisional Railway Managers of the zone at Rail Nilayam, the Zone’s Headquarters.

Addressing the meeting, Vinod Kumar Yadav stated that the excellent work culture prevailing on South Central Railway has contributed significantly to the remarkable achievements of the zone and the credit goes to the officers and staff also. The initiatives taken by the SCR towards transformation have become a model to emulate by many other railways. Now it is time to concentrate on development of infrastructure for meeting the expectations of the passengers and Nation. Prime Minister of India Narendra Modi is keenly concerned about a perceptible change in the progress of Indian Railways, he added. The Ministry of Railways is working towards policy directions for a visible change in the working of Railways.

The SCR General Manager stated that the proactive leadership quality of the Chairman, Railway Board will be a greatest asset for the railways. South Central Railway has been a beneficiary of Shri Vinod Kumar Yadav’s dynamic leadership and it is extended to Indian Railways, he added.

Additional General Manager John Thomas stated that Vinod Kumar Yadav has proved that a leader need not be an aura of fear but a man who should be trusted by all.

Coinciding with the visit of the Chairman Railway Board, a 120 KwP On grid solar power plant at Sirpur Kaghaznagar Railway Station, 80 KwP On grid solar power plants at Bellampalli and Ramagundam Railway Stations were commissioned. A renovated special ward at Central Hospital, Lallaguda, Extension of EMU Car Shed, Moula-Ali from 9 cars to 12 cars capacity and foundation stone for the Paper ward in Printing press at Secunderabad also marked the visit. Vinod Kumar Yadav released a safety dairy brought out by the safety department of SCR on the occasion.