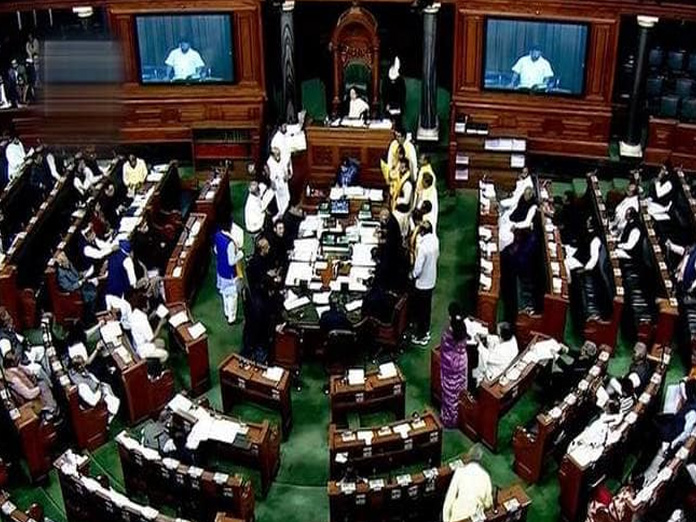 Just as Narendra Modi mocked the Congress on the rural employment scheme by saying that it was a living example jeeta jagta smarak of the partys failures, the parliamentary approval of a 10 per cent quota for the economically weaker sections under the governments aegis underlined its inadequacies on the economic front

Just as Narendra Modi mocked the Congress on the rural employment scheme by saying that it was a living example – ‘jeeta jagta smarak’ - of the party's failures, the parliamentary approval of a 10 per cent quota for the economically weaker sections under the government's aegis underlined its inadequacies on the economic front.

Had the economy been booming and there were jobs aplenty, there would have been no need for providing the crutches of reservations for another group in addition to the existing provisions for the scheduled castes (Dalits), scheduled tribes (Adivasis) and the Other Backward Castes (OBCs). It was the perceived discontent over the absence of employment opportunities which made the government identify an additional 10 per cent of the population for affirmative action.

It may have felt that the initiative was all the more necessary because the popular angst over a moribund economy had found expression in the Bharatiya Janata Party's (BJP) recent electoral defeats in as many as five States - Rajasthan, Madhya Pradesh, Chhattisgarh, Telangana and Mizoram. The BJP's earlier failure to cross the halfway mark in Karnataka must have also been seen by the party along with the latest setbacks as a warning sign in the months before the next general election.

Moreover, the defeats in the heartland States were attributed to the disquiet among the middle and upper classes over not only the BJP's economic policies, but its social stance as well in the context of its hesitancy to effectively counter the judicial relook at the law on atrocities affecting the Dalits and Adivasis, which annoyed the middle and upper classes/castes.

The latest set of quotas, therefore, are aimed both to assure the new beneficiaries about jobs and education and to reaffirm the party's long-established brahmin-bania bias. The twin objectives are unlikely to have an easy run. For one, by exceeding the judicial stipulation about a 50 per cent limit on reservations by introducing the new quotas, the government courts the risk of running into legal difficulties.

For another, in its attempt to woo the middle and upper castes, the BJP may open the gates for the quota warriors to create mayhem with various demands. Already, an OBC leader has called for doubling the quota for his community from 27 per cent to 54 to bring it closer to his estimate of the actual number of OBCs in the country. For a third, the BJP's pro-upper caste tilt can alienate the Dalits, Adivasis and the OBCs to the electoral advantage of the party's opponents, especially in the Hindi heartland.

At the same time, the few "forwards" in these parties of the backward castes can move towards the BJP, compounding the confusion created by the reappearance of the caste-based "Mandal politics" of the 1990s.
But how will this divisive brand of caste mobilisation play out in the new era of economic aspirations? In the 1990s, the promise of assured jobs was deemed enough for the caste-based outfits to reap electoral benefits, sidelining the Congress and compelling the BJP to turn to the temple issue to keep its Hindu flock together.

But, now, the provision of quotas will mean little in the absence of jobs, as Union Minister for Road Transport and Highways Nitin Gadkari recently told the Marathis demanding reservations. The BJP will have to contend, therefore, not only with the legal hurdle relating to the quantum of quotas, but also the charge of making promises in a vacuum, as it were, since the expectations of the unemployed are unlikely to be fulfilled.

But these are not the only criticisms which it will face. No less strident, especially among the middle and upper classes, will be the charge that the BJP is turning its back on the economic reforms unlike the period immediately before the last general election and for a few years afterwards when it was seen to be in the forefront of the private sector-led rejuvenation of the economy.

Now that Union Minister for Food and Public Distribution Ram Vilas Paswan has called for bringing the private sector within the ambit of the quota system, the feeling may grow that the BJP will have no option but to follow this regressive advice since the government and the public sector will not be able to provide enough jobs for the needy.

Since the Congress, too, had called for reservations in the private sector in 2003 and has not formally dissociated itself from the party's 1955 pledge to usher in a "socialistic pattern of society", it can be assumed that the Indian political class will not hesitate to move backwards towards a licence-permit-control raj.

The fact that the new law on quotas was passed almost unanimously in the two House of Parliament with only a few courageous MPs showing that they still live in the 21st century is evidence that the political class across the spectrum not only believes in a controlled economy, but also has no time for meritocracy.

To them, all that matters is cynically favouring their respective caste- and community-based vote banks through quotas and the strangulation of a free market since investments will dry up in such a society.