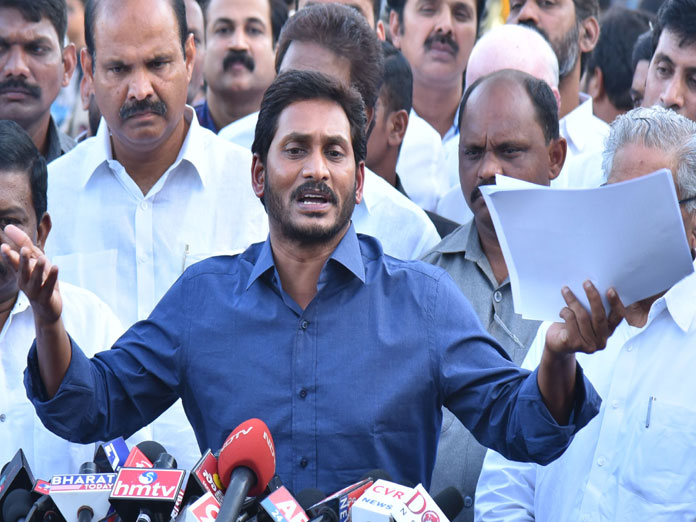 The data theft case seems to be assuming greater political colour On one hand, YSR Congress party president YS Jagan Mohan Reddy and AP BJP president Kanna Lakshminarayana met Governor ESL Narasimhan separately and complained against the Andhra Pradesh government of resorting to alleged leaking of confidential data pertaining to people of the state to private IT companies, while on the other Andh

Hyderabad: The data theft case seems to be assuming greater political colour. On one hand, YSR Congress party president YS Jagan Mohan Reddy and AP BJP president Kanna Lakshminarayana met Governor ESL Narasimhan separately and complained against the Andhra Pradesh government of resorting to alleged leaking of confidential data pertaining to people of the state to private IT companies, while on the other Andhra Pradesh government is contemplating taking legal measures alleging that the party data has been stolen by Telangana state police.

The TS government constituted a 9-member Special Investigation Team for further probe into the case. Talking to media after meeting Governor, Jagan said that he had informed the Governor that cybercrime had taken place and there was a clear evidence of involvement of Chief Minister N Chandrababu Naidu in it. He reiterated that confidential details of the residents of Andhra Pradesh like the Aadhaar and bank accounts were available with the private company - IT Grids.

The wrongful possession and linking of the details, collected by TDP government to the private players is a cybercrime, he said.Jagan said that he would approach the Election Commission once again with regard to bogus votes. He had already complained about the large number of missing names from electoral rolls and the TDP government has been doing this for the past two-and-a- half years.

Stating that there are 59 lakh bogus voters, Jagan said Form 7 was just a request to EC to check the veracity of the complaint.The YSR Congress leader said that the comments on complaint being lodged in Hyderabad and trying to project it as a conflict between Andhra and Telangana regions is stooping to low levels by Naidu. In any criminal case, the place of offence will be considered for lodging a complaint and that was what happened and TDP is trying to project it in a distorted manner, he added.

Meanwhile, the TS government constituted Special Investigation Team headed by senior-most police officials and state Inspector-General (IG) Stephen Ravindra. The nine- member SIT will take over the investigation and probe in all aspect of the case. The cybercrime and other police wings, including CID will extend all assistance to the SIT keeping in view of the complexity of the case.

However, so far it has not been able to find any substantive information and is now trying to get the services of ethical hackers to de-code information from the seized computers. The police also issued look out notice on the prime suspect D Ashok of IT Grids. Hyderabad Police Commissioner Anjani Kumar has said that Seva Mitra app is being used to know political inclinations of the public in Andhra Pradesh.

He said that IT Grids is collecting information of the voters, including Aadhaar number, education, community from grassroot level and analysing it. He said that Telangana police found the details of TDP booth conveners, dashboard details. The Commissioner elaborated that the details are being sent to booth-level TDP workers. He told that the IT Grids is calling voters through their surveyors and asking to which party they are going to vote. Anjani Kumar stated that some of them have complained about this is in Hyderabad.