Indians' love for Buddhism reflected in Ashoka Stupa in China Radiant in its grandeur and serene in its effect, a newly inaugurated restored Ashoka Stupa in this remote Himalayan town close to Tibet symbolises the missionary zeal of Indians to spread the message of Buddhism since the ancient ages.

Radiant in its grandeur and serene in its effect, a newly inaugurated restored Ashoka Stupa in this remote Himalayan town close to Tibet symbolises the missionary zeal of Indians to spread the message of Buddhism since the ancient ages. 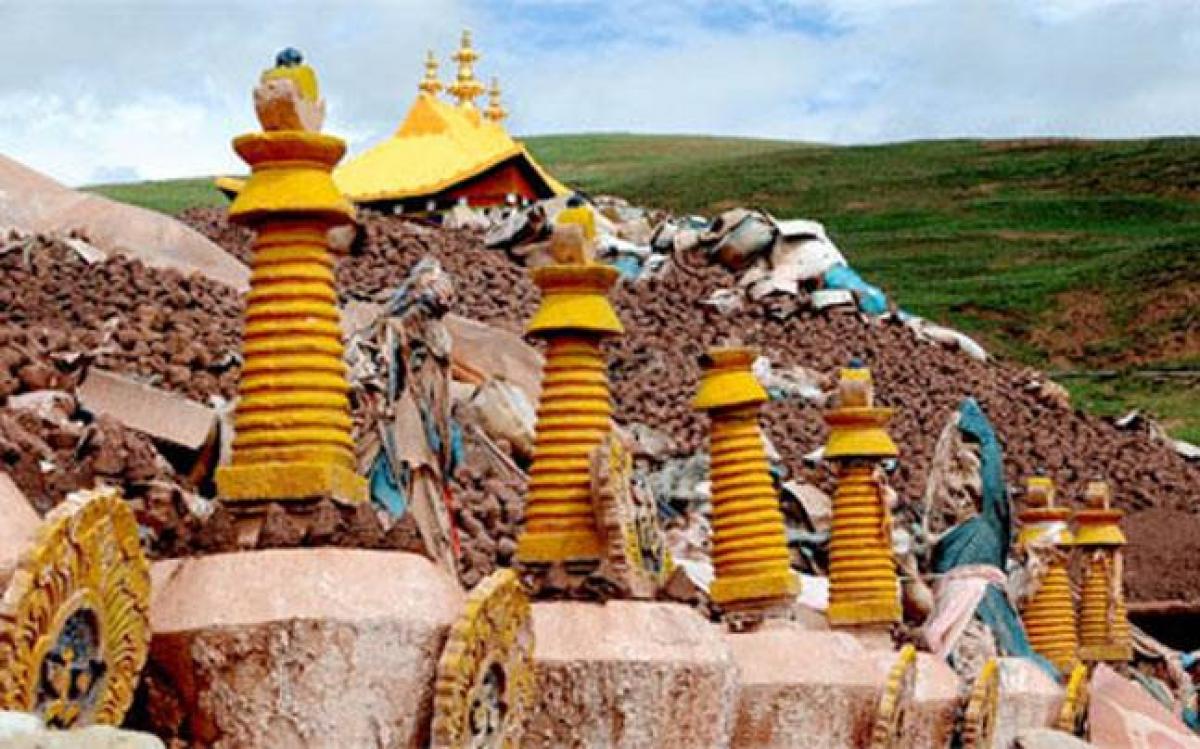 Beckoning tourists and pilgrims alike, the dome-shaped shrine, whose complex includes a newly-installed giant 35 metre statue of Lord Buddha atop a temple dedicated to him, stands in this mystic land of monks and yogis, around 3,600 metres above sea level in China's Qinghai province neighbouring Tibetan Chamdo district.
The stupa was restored by followers of Gyalwang Drukpa, the Ladakh-based Indian spiritual chief of the Drukpa lineage of Buddhism, with support from the Fu Rui Charitable Foundation accredited by the Chinese government, marking out the $25 million project as a significant milestone in China-India cooperation.
Contributions also came from many Asian devotees of the Drukpa, including renowned industrialists like the Lim family of Singapore.
Amid chanting of hymns, reading from the Buddhist scriptures, and the presence of over three lakh devotees from across the world, the Drukpa formally inaugurated and consecrated the temple and the stupa alongside senior monks.
Chinese officials and Indian Lok Sabha member Vinod Sonkar graced the occasion.
Drukpa hoped it would help better China-India relations as per Prime Minister Narendra Modi's wish.
"Yes, this will be a very good contribution towards (prime minister) Modi's wish and be beneficial for bilateral ties between India and China," he said.
The original stupa was set up in Nangchen -- an important centre of trade and politics in what was then eastern Tibet -- by Buddhist missionaries carrying the message of India's third Maurya emperor Ashoka the Great, who ruled from circa 65-238 B.C. or 273-232 B.C.
Ashoka had divided the relics of Lord Buddha into 84,000 stupas and despatched missionaries and close relatives across India and abroad to propagate Buddhism and promote peace.
As per records of the Tang dynasty which ruled China between 608 A.D. and 907 A.D., 19 such stupas existed in China, but most of these gave way due to natural wear and tear, human negligence, or were shifted to other locations.
Locals say the original Nangchen Stupa -- said to be 2,000-odd years old -- was destroyed during the Chinese Cultural Revolution when people took away the foundation rocks to make their own homes and over time, the structure became unrecognisable.
Later, apparently a stone pillar inscribed with the history of Ashoka's building of the stupa was unearthed, but the pillar disappeared a year after, and the location was reduced to a historical site of ruins.
Keen to see the stupa restored, devotees requested the local Drukpa spiritual chief Tulshik Adeu Rinpoche to take the initiative.
He took the initial steps and informed the supreme leader Gyalwang Drukpa, but passed away before the project could start.
His nephew Trulshik Satrul Rinpoche then took up the task.
The restored stupa is a grand, multi-level ornate structure, before which stands the remains of an original rock edict of Ashoka detailing the features.
The lowest level has a statue of the stupa's protector Mahakala, whose reference is also there in Hindu religion.
The gold-plated stupa forms the cover for remnants of the original stupa which is kept in a glass case.
"The newly restored stupa has five levels. It contains five million small stupas made by the locals over a period of three years. The stupa itself documents the developments in the history of the stupa, all five stages of Buddha's lives are depicted through murals, and the eight different types of stupas commoerate the eight fold path of Buddhism," said monk Yeshe Namgyal.
One hundred and fifty thousand mani sones and 160,000 engravings of Tripitakas containing Buddha's teachings are other highlights.
"There are 500 mini stupas, each of which tells a story," said the monk.
The 35-metre Amitabha Buddha statue on the top of the temple has been donated by Felix Lim, chairman of Maz Energy Private Limited of Singapore.
"The Drukpa told my wife that he has dreams to install a stature of Buddha. My wife informed me. I initially thought of an earthen stature. Then his holiness said he wanted something which would exist for hundreds of years. So we made this statue of mixed alloy.
"I contributed to this out of love for my wife and reverence for His Holiness," said Lim.
Show Full Article
Email ArticlePrint Article
More On