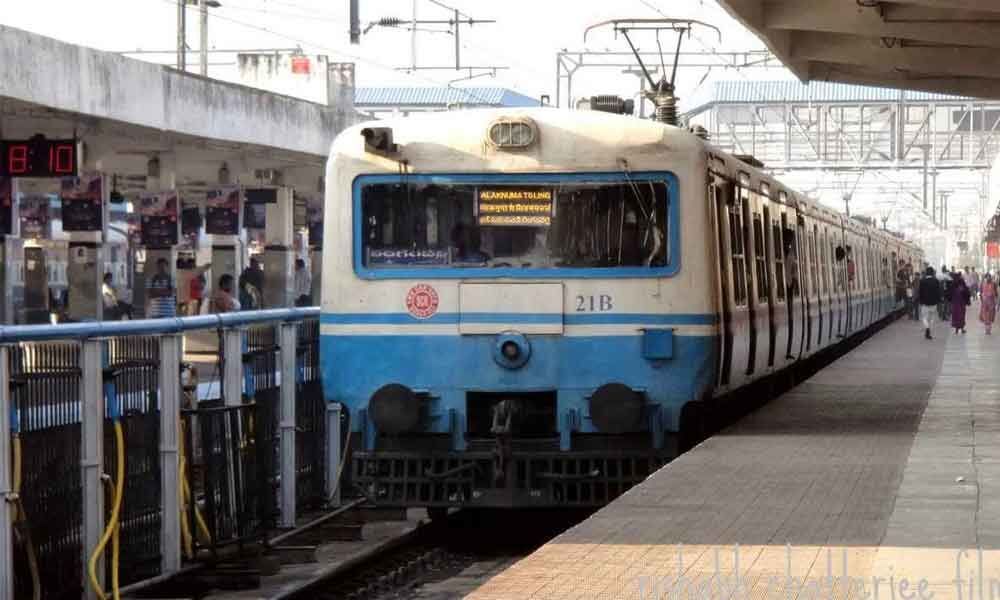 Currently, the average number of passengers in the suburban section of MMTS is 1.65 lakh of passengers per day spread over 50 km covering 29

The major transport models after the RTC bus services in the city, MMTS came as a saviour for commuters in the suburban parts of the city.

Now it is addressed as the most economical, reliable and safest modes of the transport system in Hyderabad and Secunderabad twin cities. Shri L K. Advani, the then Hon'ble Deputy Prime Minister of India flagged off MMTS trains on 9th August 2003 at a function organised at Bhoiguda, Secunderabad.

 Railways and State Government jointly started this unique suburban transportation project to ease the traffic congestion in the Hyderabad.

 As per the contract, 1/3rd expenditure of the project has to be tolerated by Railways and 2/3rd by the State Government.

 Later, Secunderabad- Falaknuma to a stretch of 15 Km was also brought under MMTS network in during February 2014.

 Consequently, MMTS made operational to cater the twin cities commuters to a stretch of 44 Km spread over between Falaknuma-Secunderabad-Hyderabad-Begumpet­ Lingampalli covering 26 Railway stations, connecting the eastern part of the city with the western end.

 In addition to the current MMTS sections, recently the section between Telapur- Ramachandrapuram for a distance of 6 Kms with the addition of 3 stations, which is part of MMTS Phase-II, became operational as of June 9, 2019.

 Firstly, the fare structure for these services was on par with regular Mail / Express trains. Also, due to their response from travellers, these sections and stations were identified by the Railroad Board as "Suburban" Stations and sections from December 15, 2012.

 After identifying as suburban stations, several comforts were provided for passengers, such as foot over bridges, toilets, high-level platforms, video circulation areas with parking, improved facilities for Divyangjan, etc., to strengthen comfort and security of the travellers.

 Seasonal ticket service is available for daily travellers of MMTS services, which is a small amount compared to other modes of transportation in Hyderabad. Besides, a combined season ticket for travel on both MMTS and urban bus services are known as "General Bus Ticket (GBT)" is also available for Rs. 880.

Currently, the average number of passengers in the suburban section of MMTS is 1.65 lakh of passengers per day spread over 50 km covering 29 stations.  Improved aesthetics and comfort within the coaches, as a separate colouring for first-class ladies and trainers; advance seating comfort

 Introduction of the 'Nirbhaya Squad' composed of Lady Ticket Examiner and Lady RPF staff for the safety of Passenger Women.

 Provision of services such as parking lots, bathrooms, etc. in all MMTS stations.

 Introduction of the new MMTS 12 rakes for cars from May 1, 2019, with improved safety features.