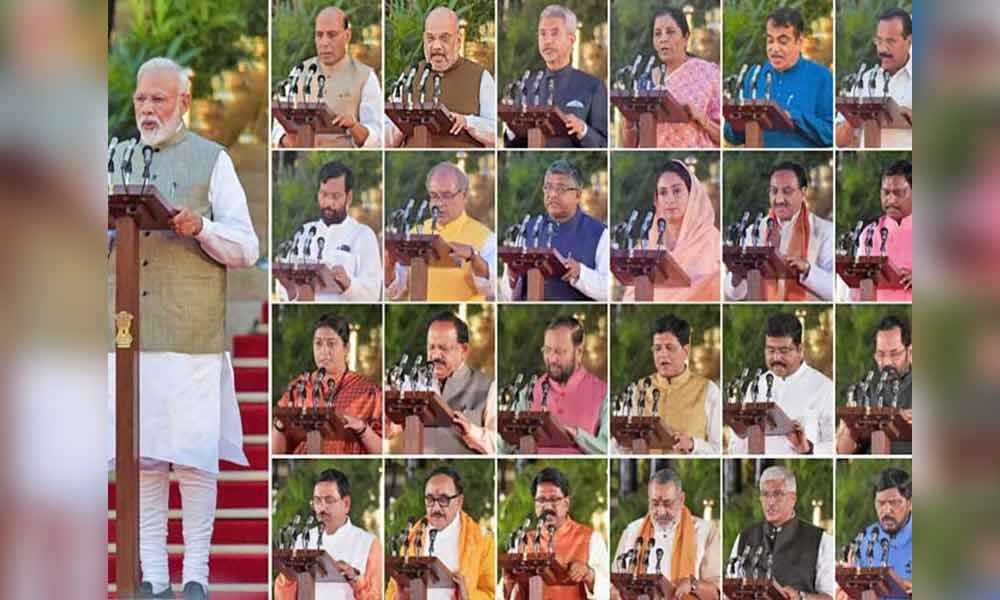 With the promise of acche din in 2014, Modi became the man at the helm and the timeline thereafter had a different hue unlike Congress dispensations.

With the promise of acche din in 2014, Modi became the man at the helm and the timeline thereafter had a different hue unlike Congress dispensations.

His governance mantra - reform, perform and transform - was driven by the agenda of nationalism which thrusted upon visualising a non-warring powerful welfare state.

The amplitude of development in the five-year period between chaiwala to chowkidar campaign spanned from financial inclusion for poverty amelioration to positioning India as a global powerhouse.

Agriculture which employs 50 per cent of Indian workforce has only ensured food security and not farmers' welfare. Doubling farmers income by 2022, Modi's commitment that began early 2016 is prioritised next after National First philosophy in Sankalp Patra.

In this 5-year span, policies covered agricultural operations from ploughing to processing. Particularly, fasal bima, e-NAM, record levels of procurement at MSP and 6000 cash transfer (instead of inefficient farm loan waiver) stand out.

With microeconomics in play, the poor, especially, women felt that they were part of governance structure.

Ten per cent reservation to economically weaker sections from the unreserved strata, passage of Triple Talaq bill in Lok Sabha, constitutional status to BC Commission are pointers to the promise of sabka saath sabka vikas.

If every section of people benefitted from this dispensation, every region witnessed development too. Udaan and many infrastructure projects have reinvigorated Jammu and Kashmir. Similarly, north east India has witnessed unprecedented development.

5 Udaan airports, completion of broad gauge conversion, 50000 crores worth of 15 new rail lines, electrification of 5000 villages in remotest areas to mention a few. North east is now the new growth engine of India.

The landmark legislations - GST, IBC and RERA - streamlined economic activities. GST could improve tax revenues on the back of simplified tax structure and compliance.

IBC averted a systemic banking collapse when the run rate of NPA recognition was impulsive. Banks could recover to the tune of 3 lakh crores while RERA has moderated the real estate with improved consumer bent.

The massive jump of 65 places to 77 in Ease of Doing Business in 2018 and 'India is bright spot in global landscape' note from IMF pushed India past China for attracting top dollar from foreign investors in 2018 - first time in 20 years.

Modi's structural reforms and policies - both current and as declared in Sankalp Patra - will create an interlocking economic architecture that not only aids sustaining fastest GDP growth among major economies but also acquire resilience to absorb global shocks and prevent recessionary effects.

The economic turnaround story propelled India from a fragile five in 2014 to world's fastest growing major economy - an elephant starting to run as IMF puts.

Pakistan and China have been India's flashpoint since Independence and successive governments have merely passed the baton without biting the bullet.

Doklam incursion by China was an attempt at choking the Siliguri corridor connecting India's north east. Modi government averted a war like situation while thwarting Chinese claims on the Doklam plateau leveraging the diplomacy channels.

The result - Modi's administration revelled in historical victory over China whose hegemony driven by territorial ambitions - moderated from invasion to incursion - could not be challenged by successive governments since India's faceless defeat in 1962 war.

In a strong rebuttal to martyring 40 soldiers in Pulwama, Modi emboldened the Army to undertake flash air strikes to dismantle terror infrastructure.

The subsequent stream of measures including Modi's engagement with international community, after Balakot bombing, meant that Pakistan will face international isolation if their nation is the point of origin in any future terrorist attack.

The continued engagement consummated in China removing the technical hold and designating Masood Azhar as global terrorist. A feather in cap of Modi's regime - it must be said.

This hallmark achievement, unparalleled in Indian independence, resonated with the Indian populace and earned Modi the credentials of acting tough on terrorism and keeping in check India's aggressive neighbours.

India had a dream run with Modinomics and his security doctrine. To ensure it is unrelenting, India secured a further five- year hedge.

(The author is a BJP leader)