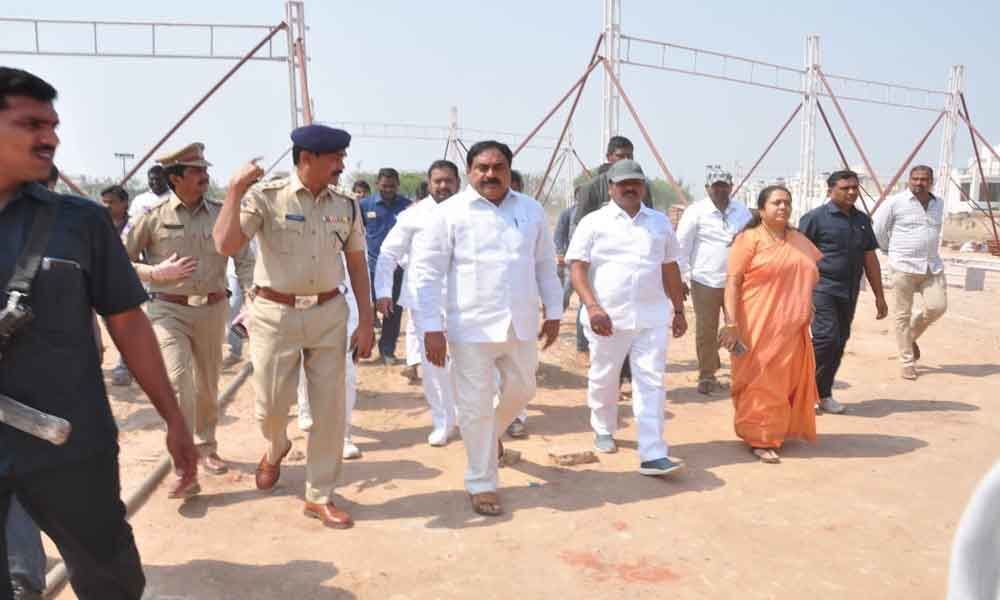 The Telangana Rashtra Samithi (TRS) functionaries have a tough task on hand to mobilise crowd for the public meeting to be addressed by Chief Minister K Chandrashekar Rao at Azam Jahi Mill Grounds on Tuesday.

Warangal: The Telangana Rashtra Samithi (TRS) functionaries have a tough task on hand to mobilise crowd for the public meeting to be addressed by Chief Minister K Chandrashekar Rao at Azam Jahi Mill Grounds on Tuesday.

With the TRS' public meeting at LB Stadium in Hyderabad on Friday (March 29) was cancelled abruptly apparently due to poor mobilisation of crowds, the party functionaries appear to be cautious over ensuring a sizable crowd for the Tuesday's public meeting.

With temperatures hovering around 42 degree Celsius, people in the erstwhile Warangal district are already choosing to stay indoors to escape the heat. It's said that KCR loves huge gatherings for his meetings especially during the elections rallies. Barring Bhupalpally Assembly constituency which is held by the Congress, the other six segments are held by the TRS.

The MLAs who not long ago faced Assembly elections seem to be in a piquant situation with KCR reportedly told them to ensure huge margins in their respective constituencies so that TRS nominee Pasunuri Dayakar would repeat the 2015 by-poll feat where he won with a record margin of nearly 4.60 lakh votes.

With Lok Sabha and Assembly elections are being held separately for the first time in the State, the candidates in the Lok Sabha poll fray, irrespective of their party affiliation, need a maximum support from the local MLAs.

On the other hand, it is a sort of litmus test for the MLAs who are aspiring to make it to the KCR Cabinet and or expecting plum posts in the government. As a result, the MLAs are not only in a tight spot to ensure KCR meeting a huge success but also in ensuring a record majority for TRS candidate.

"It would have been easy for the Lok Sabha candidates if the Assembly polls were combined with the General elections. Now, all the Lok Sabha contestants depend heavily on the MLAs of seven Assembly segments in his parliamentary constituency. Naturally, there would be some sort of complacency among the MLAs as they had already won the elections. But here in this case, TRS leadership gave clear indications to MLAs to translate the same margin they got in the recent Assembly elections to the Lok Sabha candidate in the April 11 polling," a senior TRS leader told The Hans India.

Although Minister for Panchayat Raj Errabelli Dayakar Rao was entrusted with the responsibility of ensuring victory in Warangal and Mahabubabad Parliament seats, the smartness of MLAs and other key leaders of the district is also being judged by the TRS leadership, party sources said. It may be mentioned here that KCR is also slated to address a public meeting in Mahabubabad town on April 3 for party candidate Maloth Kavitha.