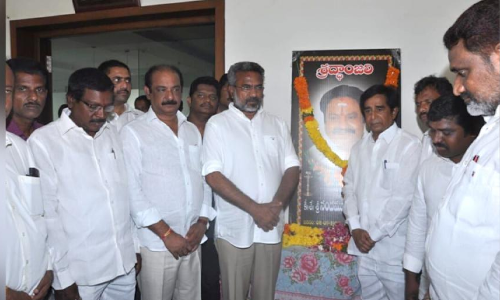 Recalling his association with the late leader, Chikkala said that they both served as ministers in NTR Cabinet in 1995.

While Harikrishna served as transport minister, he looked after education.

Chikkala also said that Harikrishna had driven the ‘Chaitanya Radham’ used by NTR for his campaign in the year 1982 across the state for 35,000 kilometers and assisted the party in coming to power in a span of nine months in the year 1983, the MLC recalled.

Kakinada city MLA V Venkateswara Rao while paying tributes to late Nandamuri Harikrisna said that it was a great loss to TDP as the late leader had been associated with TDP since its inception in the year 1982.

Meanwhile, Kakinada Rural MLA P Anantalakshmi termed him as leader who stood by late NTR in the formation of TDP and in NTR whirlwind tour of entire state of combined AP in the year 1982 in a span of nine months and in the victory of the party in 1983 polls.

At the condolence meet organized at TDP Kakinada Rural office at Valsapakala, the party district general secretary P Satyanarayana Murty said that the TDP lost a leader who always strived for service of the party. Leaders and cadre of the party attended in large numbers.