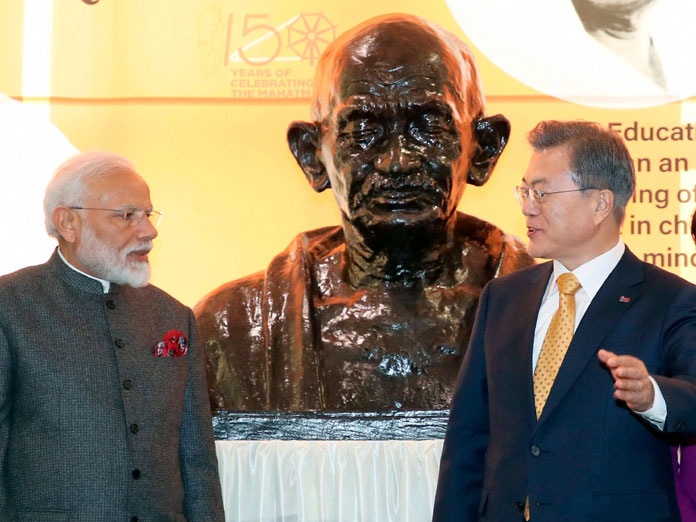 Seoul: Prime Minister Narendra Modi on Thursday unveiled a bust of Mahatma Gandhi at the Yonsei University in Seoul and said we can find solutions to the two biggest challenges facing humanity - terrorism and climate change - from Gandhi's life. "Terrorism and climate change are the two biggest challenges mankind is facing now.

If we look at the life of Gandhi, we can find solutions to both these problems. Gandhi used to say that the Almighty and the bountiful nature have given everything to fulfil a human being's need, but not the greed," Modi, on a two-day state visit to South Korea, told a gathering. Expressing his concerns over the surge in terrorist activities, Modi advised people to look at Gandhi's message of unity, human values and non-violence to succeed in the fight against terrorism.

"During Mahatma Gandhi's lifetime there was no discussion about climate change and environment, but the statesman led such a life that he did not leave any carbon footprint. “He showed what living in harmony with nature is. He showed that it is important to leave a clean and green planet for the future generations," Modi said.The Prime Minister said that Gandhi was perhaps mankind's biggest gift in the 20th century.

"In the last century, through his life and personality, he showed what the future would be. He in fact used to say 'my life is the message,'" Modi said."This occasion assumes greater significance since we are celebrating the 150th anniversary of Mahatma Gandhi and the world is finding in Gandhi's principles a future for mankind's interests," Modi said.