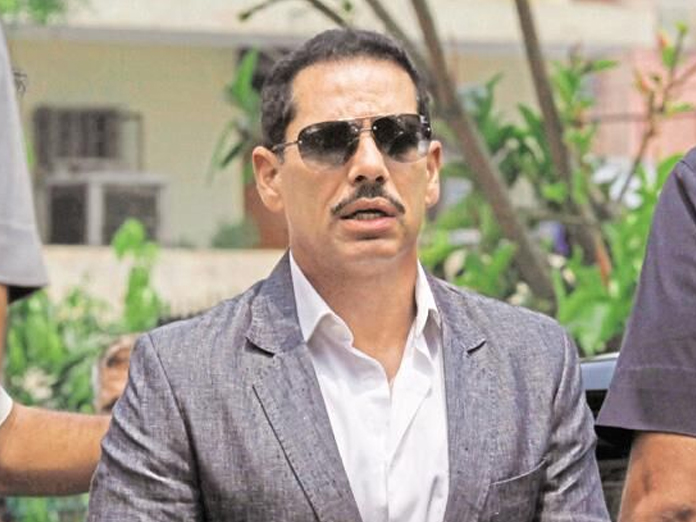 Robert Vadra, facing Enforcement Directorate ED probe in cases of alleged money laundering, moved an application in a Delhi court on Saturday, seeking a copy of documents seized by the agency in a raid conducted at his offices in 2018

New Delhi: Robert Vadra, facing Enforcement Directorate (ED) probe in cases of alleged money laundering, moved an application in a Delhi court on Saturday, seeking a copy of documents seized by the agency in a raid conducted at his offices in 2018.

The application, which was moved through senior advocate KTS Tulsi, sought a copy of the documents seized by the agency from Vadra's office. Vadra, who is the brother-in-law of Congress president Rahul Gandhi, said in his application that the ED has been interrogating him based on the seized documents and therefore their copies should be provided to him.

On December 7,2018, the agency had carried out raids at Vadra's offices at Delhi. Vadra has appeared before the ED for questioning on multiple occasions in Delhi and Jaipur.

The money laundering cases being probed by the ED relate to purchase of alleged illegal assets abroad and an alleged land scam in Bikaner, Rajasthan.

The court had on February 16 extended the interim bail granted to Vadra till March 2. Vadra had filed an anticipatory bail application in the case linked to allegations of money laundering in the purchase of a London-based property at 12, Bryanston Square worth 1.9 million pounds.

The property is allegedly owned by him. The agency had earlier said it has received information about various new properties in London which allegedly belong to Vadra, including two houses of five and four million pounds, each, six other flats and more properties.

The plea had said Vadra's office was raided by the ED on December 7, 2018 and, therefore, he seriously apprehends that his liberty may be curtailed by the investigating agency.

"The petitioner (Vadra) is being subjected to a farce criminal prosecution which actually is beset with nothing else except political vendetta and most unfortunately the respondent (ED) being the law enforcement agency is a party to the unethical and illegal exercise.

"It is stated that the petitioner's (Vadra's) firm, through its authorised representative Manoj Arora, has already joined investigation with the ED conducting investigation into the affairs of the firm in Rajasthan with their offices at Jaipur on many occasions and has supplied all the relevant documents to the satisfaction of the officials of the ED," the plea had said.

Arora, an employee of Vadra's Skylight Hospitality LLP, was a key person in the case and he was aware of the latter's overseas undeclared assets and was instrumental in arranging funds, the ED had alleged. Vadra had alleged that he is being "hounded and harassed" to subserve political ends.

Arora had alleged before the court that the case was foisted on him by the NDA government out of "political vendetta". However, the ED had refuted the allegations, asking that "should no authority investigate any political bigwig because that will be called a political vendetta?"

The agency had told the court that it lodged the money laundering case against Arora after his role came came to light during the probe of another case by the Income Tax Department under the newly enacted Black Money Act and tax law against absconding arms dealer Sanjay Bhandari.

It had alleged that the London-based property was bought by Bhandari for GBP 1.9 million and sold in 2010 for the same amount despite incurring additional expenses of approximately GBP 65,900 on its renovation.

"This gives credence to the fact that Bhandari was not the actual owner of the property but it was beneficially owned by Vadra who was incurring expenditure on the renovation of this property," the ED had told the court.